The Best Vector Software for Mac Designers on a Budget


Adobe Illustrator is often considered the gold standard of vector software for Mac. But it’s also expensive. Thankfully, you can use cheaper alternatives to create crisp artwork and beautiful diagrams. Many Illustrator alternatives exist, and they give you some compelling options when you’re short on cash.

If you’re looking for a Mac vector editor to use in your next project, you should try one of these free vector editors or cheap Adobe Illustrator alternatives first.

These are the best vector apps for macOS that you can use for free or buy on a budget.

Inkscape is probably the most versatile free vector editor for Mac. With a long history of development and a keen fanbase, Inkscape works on all three major operating systems and costs nothing.

Inkscape uses an open-source development model (like these other free open-source mac apps), and as a result, its technological progress is often slower than that of its commercial rivals. Inkscape prides itself on its full compatibility with the W3C open standard SVG, and it strives to make itself one of the most user-friendly SVG editors for Mac.

Despite this user accessibility, newcomers may feel a little out of their depth when trying it out. To help, there’s extensive documentation and answers to your questions within the Inkscape forums.

Mac users may need to download XQuartz in order to run Inkscape. So if you’re not a fan of additional downloads, this not be your best option.

Vectr is a free vector editor built on web technology. You can download Vectr for Windows, Linux, or Chrome OS, or run the browser version through macOS.

The app comes with a promise of being “free forever,” and its tools are mostly focused on creative vector drawings, such as logos, brochures, and posters.

Best of all? Vectr includes a comprehensive user guide and tutorials, so you can learn how to use it effectively in very little time.

LibreOffice is a popular open-source alternative to Microsoft Office, and it comes with its own vector drawing program called Draw. Unfortunately, LibreOffice Draw isn’t as feature-rich as some of the other programs on this list, but it does offer a few options.

The free vector editor seems to be aimed at users who want to create flowcharts or diagrams. It also has the ability to create technical drawings and brochures. LibreOffice Draw is also a great Mac vector editor for those looking to create network diagrams—all without a high degree of artistic skill.

Related: What Is a Vector File?

LibreOffice Draw lacks the polish of some other programs, but if you were previously using LibreOffice, you might already have it installed already.

Boxy is a type of vector graphics software for Mac with similar functionality to Inkscape. As well as a web version, it has its own Mac app available through the App Store, and it can import and support SVG file extensions. It can also support PNG, JPEG, and GIF files.

When you’re using Boxy, transform tools, grouping tools, and painting tools are all supported with preset shapes, along with support for gradients and patterns.

Boxy is a nice entry to the vector graphics category built on web technology. It’s also lightweight and begging to be played with.

Previously known as iDraw, Autodesk Graphic is a great lightweight vector editor for Mac. It’s more expensive than it used to be, but it still maintains a robust feature set with full support for SVG, PDF, and AI (Adobe Illustrator) formats. It also has layered PSD imports and exports for Photoshop users.

Featuring a good range of tools for drawing and sketching, Autodesk Graphic makes a great choice for an SVG editor when you’re a designer on a budget.

You can also get Autodesk Graphic on your iPad, which uses iCloud to sync. This way you can access your designs on the go. 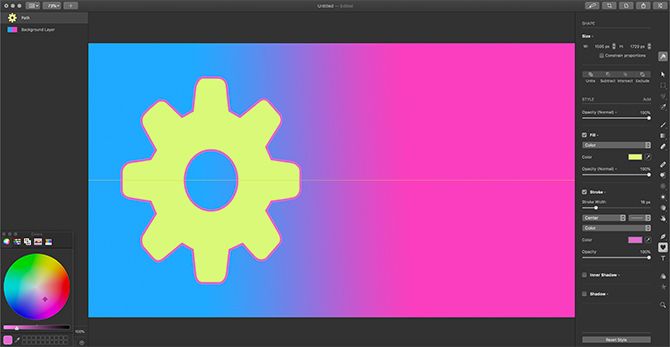 Pixelmator is one of our favorite Adobe Illustrator alternatives on this list for editing vector images. The app provides great support for vector drawing with shapes and lines.

Pixelmator has a range of built-in shapes and tools for mapping out vectors, though professional users who are used to the advanced features in Illustrator will probably be left wanting more.

Still, it’s a great app that can perform many common tasks.

After the glowing reception it received for the raster editor Affinity Photo, Serif Labs introduced Affinity Designer to take on the vector editor market. It specifically targets Adobe Illustrator’s subscription model by offering the program for a one-time fee instead of a monthly cost.

Affinity claims to have the best PSD import engine around. While we’re not sure Adobe would agree with this, Affinity does support PSD, PDF, SVG, AI, Freehand, and EPS file formats.

All of this comes alongside the usual features that you would expect from such a program—a great pen tool, curve editing, smart shapes, flexible text, and several workspace templates designed for web and print. You can also use raster-style effects for the best of both worlds.

The most expensive of the SVG editors for Mac on this list, Sketch bills itself as a professional vector program for designers. Built for ease of use, Sketch aims to produce high-quality vector drawings. There’s even a Sketch Mirror companion app that allows you to preview your designs live on your device as you work.

As you’d expect from such a professional app, Sketch has all bases covered: an advanced UI, excellent text rendering, and a slew of grids and guides to help you design to your heart’s content.

You can learn the ins and outs of the program with the Sketch support pages. You can also get a helping hand with your project by downloading community resources, ranging from iOS development kits to icon templates.

Sketch offers a 15-day free trial, so you can try this vector editor out beforehand. The only downside? You’ll need to renew your license on a yearly basis. While this yearly renewal is still less expensive than Adobe’s subscription model, it can definitely get pricey if you’re on a budget.

Should You Stick With Illustrator?

If you’re already using Adobe Illustrator, there’s a good chance you’re a professional designer. In that case, you might save some money with these cheaper vector programs, but you’re also likely to lose some features you rely on. You might know how to trace an image in Illustrator, for example, but find that feature is missing in other apps.

Of course, if you’ve never used Illustrator before or if you really need to save some cash, one of the vector apps we’ve looked at here could be ideal.

Shianne has a Bachelor’s Degree in Design and a background in podcasting. Now, she works as a Senior Writer and 2D Illustrator. She covers creative tech, entertainment, and productivity for MakeUseOf.

Please confirm your email address in the email we just sent you.

How to View Your Steam Purchase History

What Is the Difference Between Aspect Ratio and Resolution?

A sense of entitlement is a personality characteristic that’s not exclusive to spoiled kids. The…