Woman Moves To NYC And Rents A Flat For $1,575 Per Month, Is Greeted With Hundreds Of Bags Of Trash By Her Window


Rent’s always a bit of a sensitive issue, isn’t it, Pandas? It’s not something that you often talk about with just anyone—only those closest to you. However, that doesn’t apply to any apartments you might come across that throw the cost-quality balance completely out of whack! Things like being forced to live next to a huge heap of garbage right in front of your apartment window.

When you hear that an apartment costs $1,575 to rent each month, what are your first thoughts? Personally, I imagine a spacious 4-bedroom palace with a terrace, a gorgeous view of the city, and perhaps even a part-time butler to serve tea and finger sandwiches. Alas! TikToker Caroline Gelgot, aka @notfromdenmark, showed exactly what this means living in New York, and it ain’t pretty.

Beyond her window is a courtyard where the locals keep their garbage until it gets picked up. It looks horrendous, it’s unsanitary, and the ‘cherry’ on top is that it blocks the fire escape! Probably the biggest kick in the gut is the fact that Caroline had no idea that this is where everyone dumps their trash: not during the apartment viewing, not while signing the lease. Other than that, the apartment itself is pretty nice. Check out her videos about the situation below, Pandas!

Caroline has gone viral after sharing the view right outside her expensive New York City studio. Here’s one of the videos she shared on TikTok

The spacious and overall nice NYC apartment has one glaring flaw 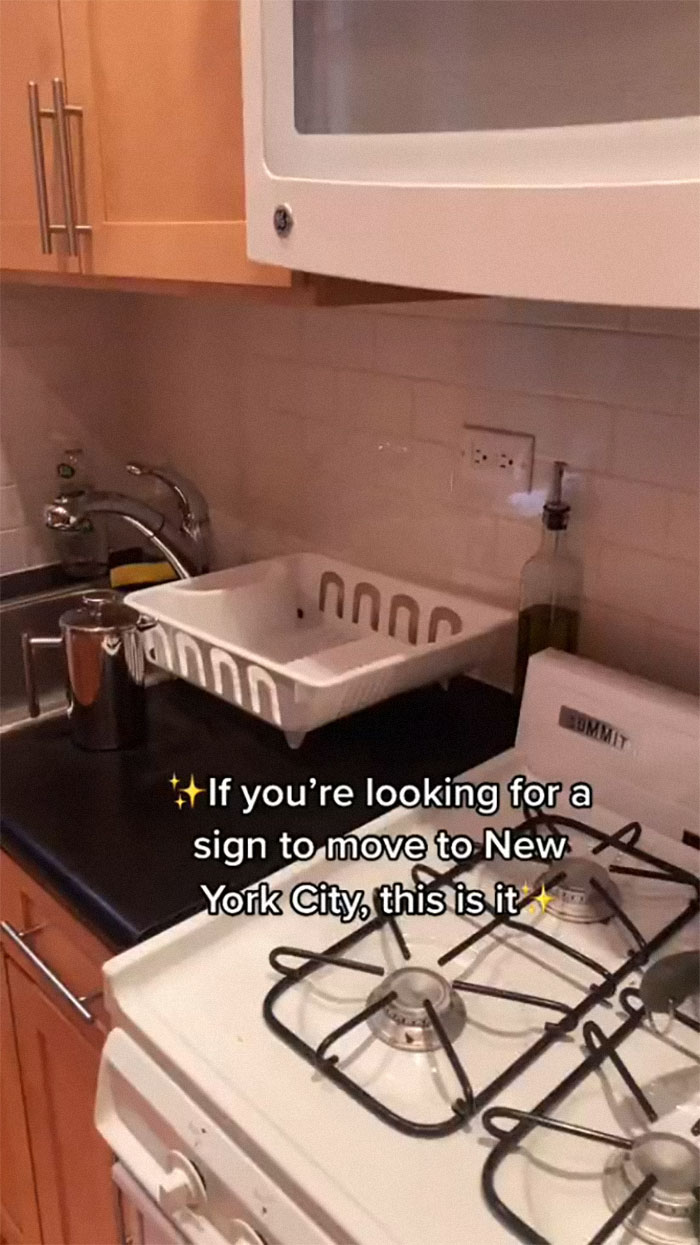 There is a literal mountain of garbage outside the window 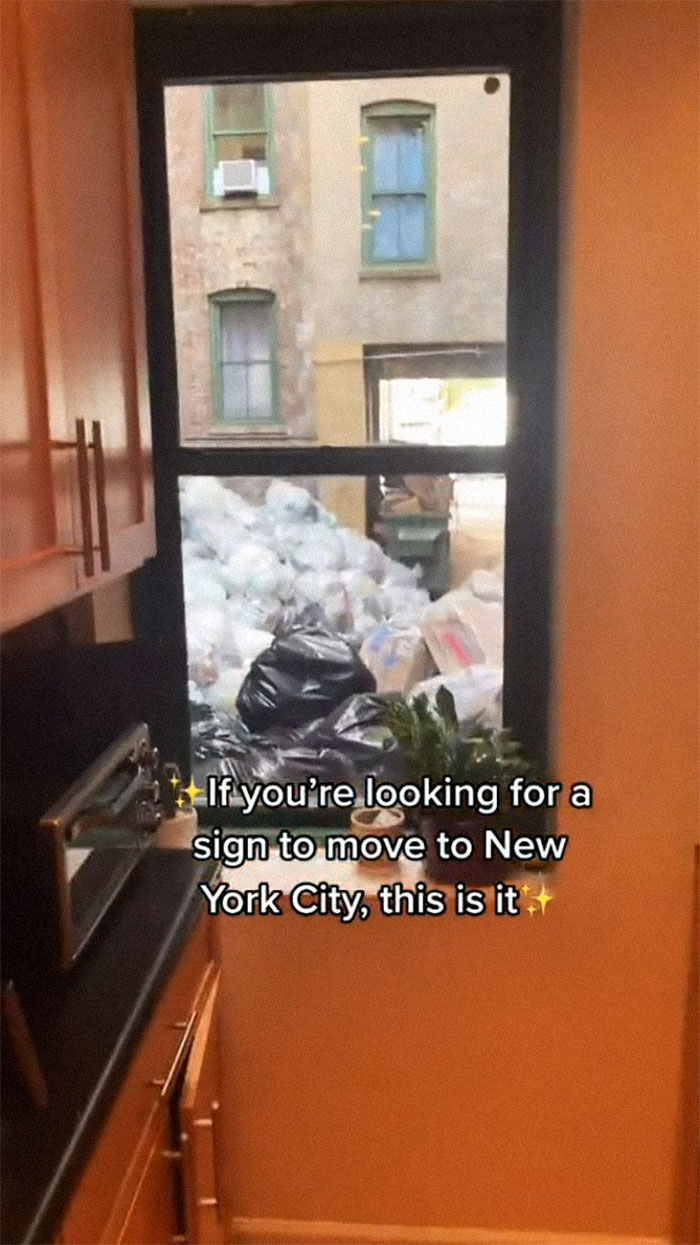 In another video, the woman explained how people dump their trash in the courtyard without any care. You can watch the full video here 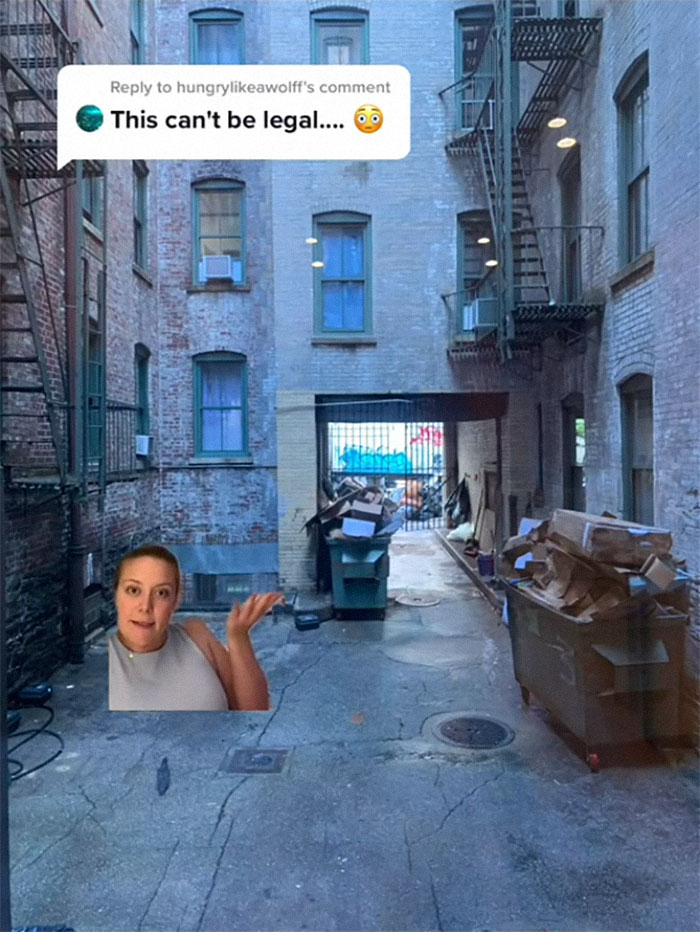 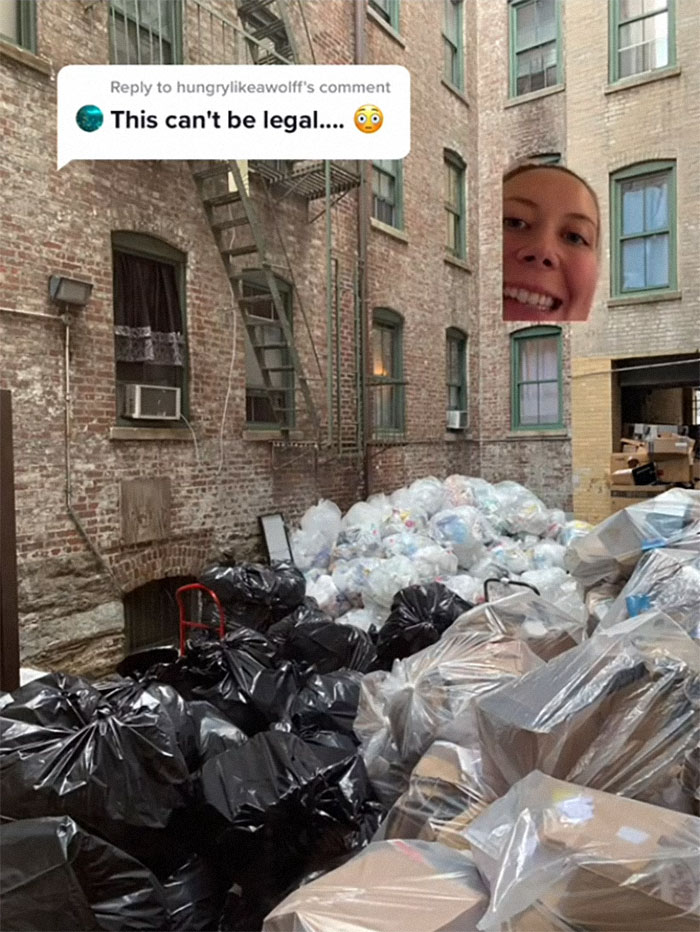 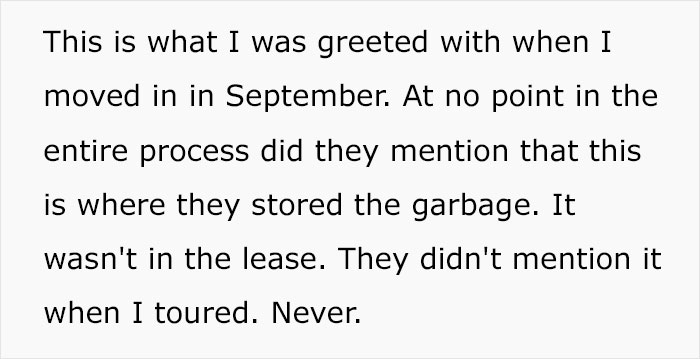 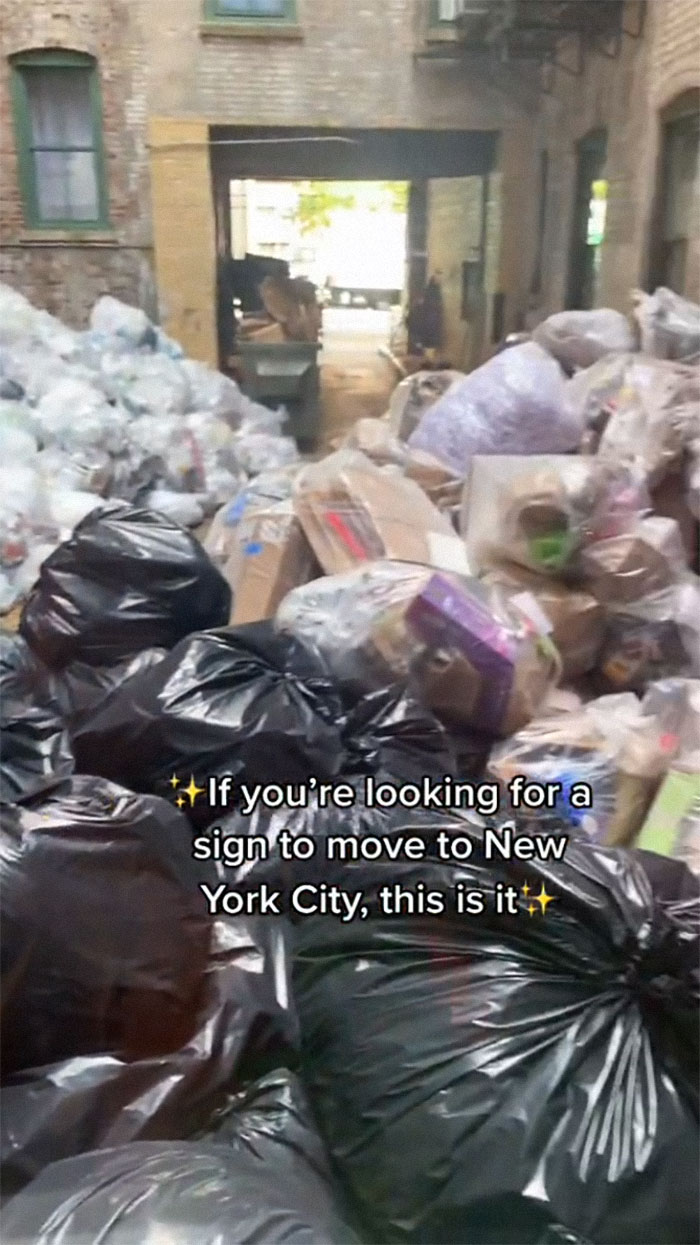 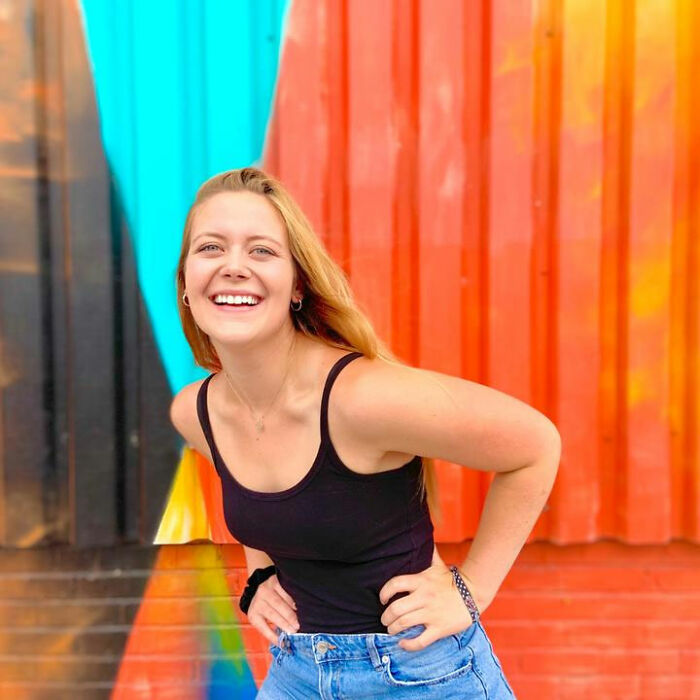 The woman’s videos had a small impact. Someone came over and painted some squares where people should leave their rubbish 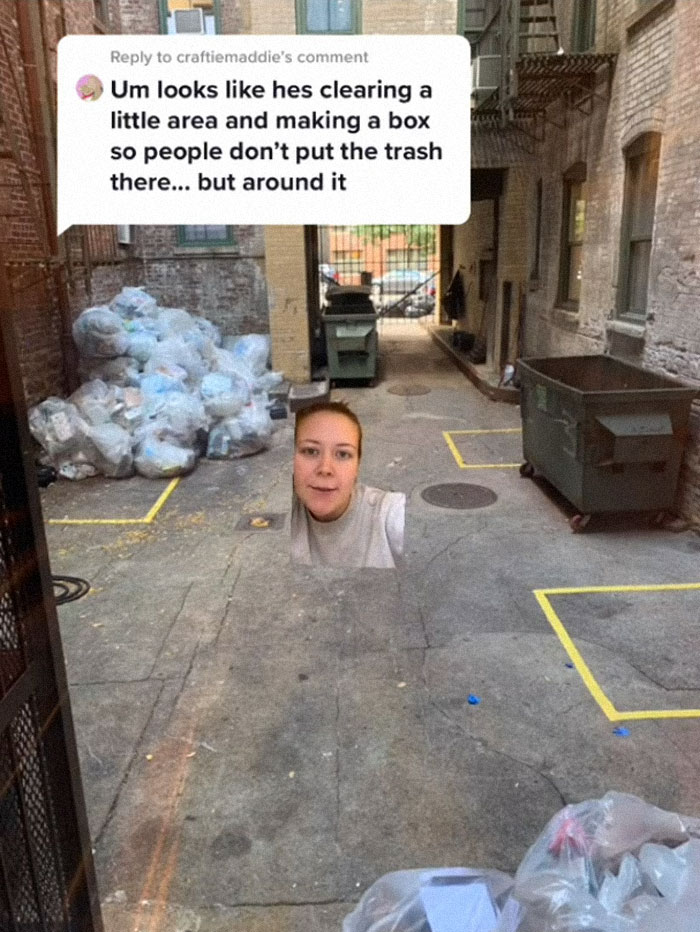 However, things didn’t go as planned… 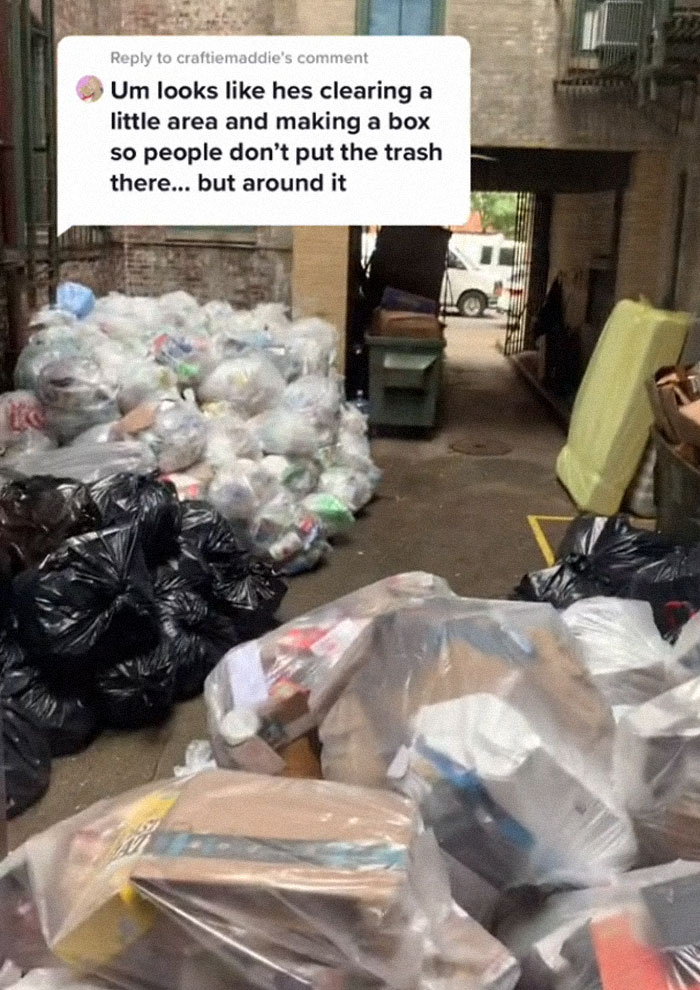 In yet another video, Caroline pointed out that the rent for her NYC apartment was supposed to be even higher. However, because of Covid, she essentially gets to live the first two months there for ‘free’ while the price would jump back to its original cost after a year.

The renter pointed out that $1575 is the absolute maximum that she can pay for an apartment. She also noted that it’s pretty spacious for a studio and it’s very nice, overall. What’s more, all of the utilities, apart from the wifi, are included in the price of the rent. And the trashy view beyond the window? That’s completely free.

Caroline’s videos actually had an impact. Well, somewhat. After one of her TikToks went viral with a whopping 4.2 million views, someone came along to paint some yellow squares in the courtyard, denoting where people should be leaving their trash so it doesn’t block anyone’s fire escapes. Things seemed like they’d work out… only they didn’t. The TikToker showed how people completely ignored the squares and piled up their trash wherever they wanted.

According to Business Insider, some of the reasons for sky-high rent prices in New York City include a booming job market, the world’s largest urban economy, and numerous wealthy residents. The Big Apple isn’t all glitz and glamor, however. Around 1.5 million New Yorkers live below the poverty line. That means that they have to choose between living in low-quality apartments, living far away (meaning commuting to work is even more of a time-consuming hassle), or they have to pay far more on rent than they can allow themselves.

‘The Balance’ explains that the rule of thumb when it comes to rent means that you should be spending roughly 30% of your monthly income on your rent. That leaves 70% of your earnings for food, transportation, clothing, and all the other things, large and small, that make up a person’s life.

However, ‘The Balance’ points out that the rule of thumb doesn’t work all the time. For example, it doesn’t account for inflation, income stagnation, or rising rent prices, which are all important factors to consider. What’s more, the rule isn’t personalized, meaning that how much you should be spending on rent might differ vastly if you have any debt, the realities of the local real estate market, as well as your own financial goals.

So if you’re looking to save more money, you’d choose to spend a smaller fraction of your earnings on rent. Meanwhile, if you live in an expensive city like NYC, you might have to fork over more of your hard-earned cash.

Earlier, I spoke to Cameron Knowlton and Tatum Kelly about rent prices in New York. They told Bored Panda that, for example, $1,650 per month “is very inexpensive” for the city. However, you have to consider what you’re getting for the price. For instance, paying even a couple of hundred dollars more might let you upgrade from a cramped studio to a far more spacious apartment.

“NY is a densely populated city with incredibly high demand,” they said.