Are you aware of how beneficial it is to own a pet? These days, life’s flooded with stress and anxiety. We constantly pressure ourselves until it eventually becomes the new norm—however, having a furry companion relaxes people and melts the worries away. In fact, previous studies have shown that having pets helps people lower their blood pressure and cholesterol levels. Plus, pets are great at listening and keeping secrets, so you’ll always have someone to chat to about your day! 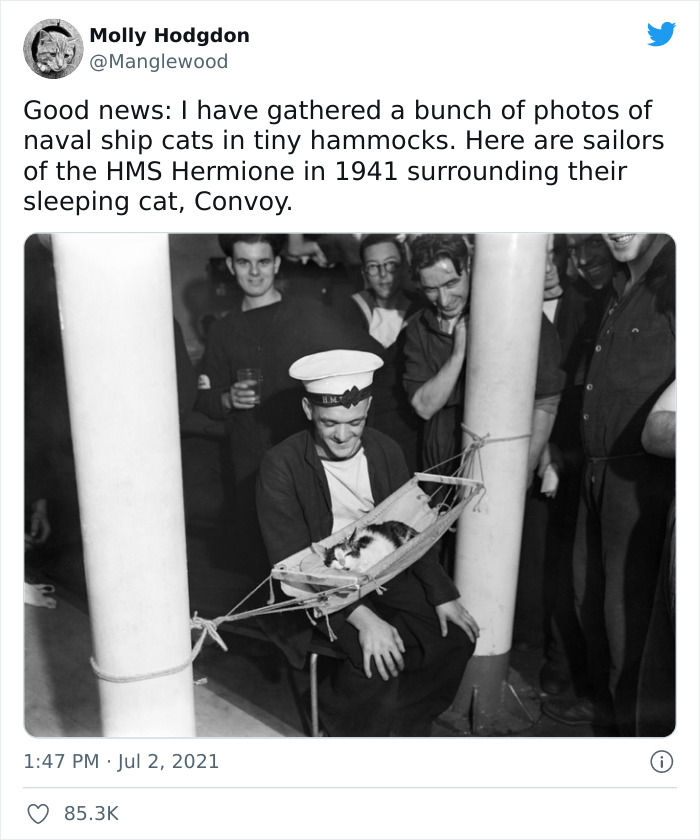 A Twitter user that goes by the name @Manglewood was kind enough to bless our eyes with an adorable thread. They’ve gathered several archive photos of the naval ships’ cats in their tiny hammocks. Not many of us are actually aware of this matter, but cats are great sailing partners. 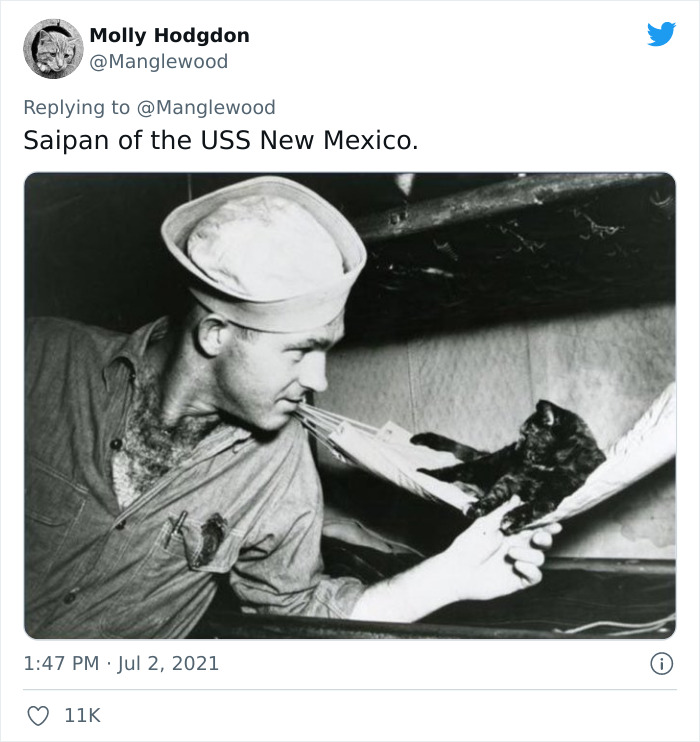 Back in the days, it was very common to have a cat aboard, as they’d protect the ship and its cargo from rodents, preventing chewed ropes and electric wires, as well as a number of diseases that would spread through those small gnawing mammals. 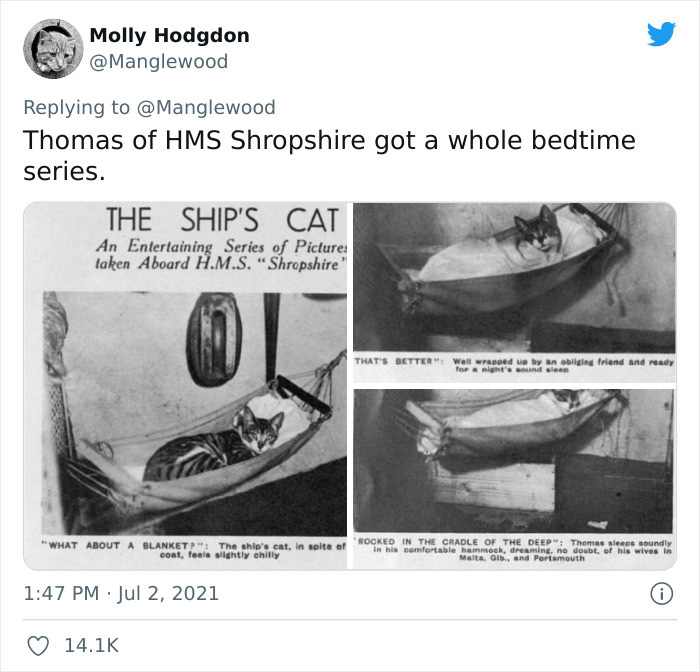 An example would include rat fleas that transmit the plague, plus it’s also believed that rats on ships might have been the reason why the Black Death became a pandemic. 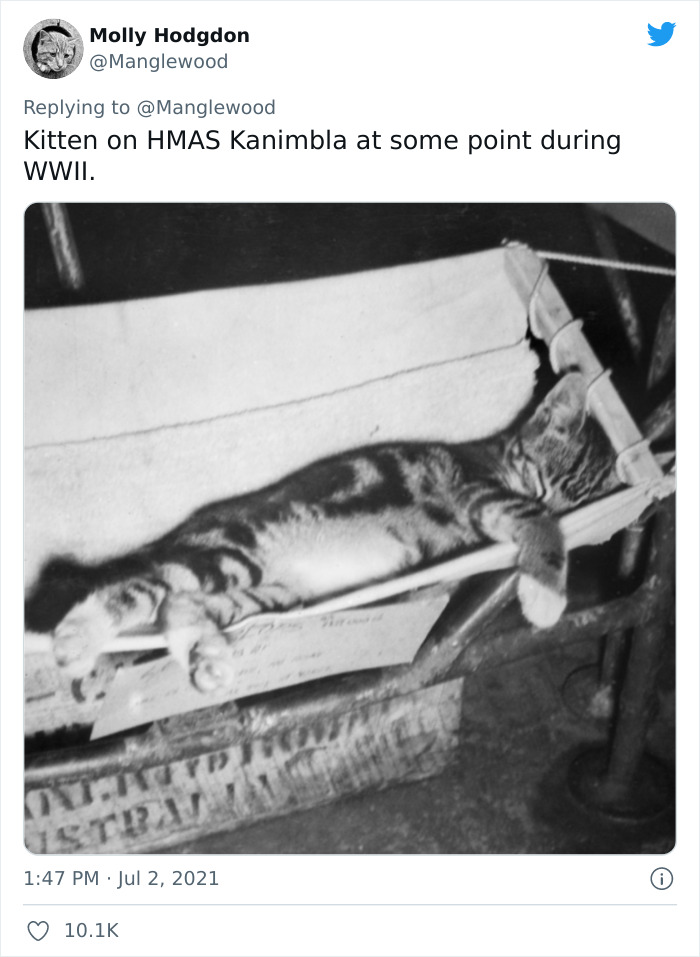 Superstition also played a part in having a cat aboard, as people believed that they bring good luck. 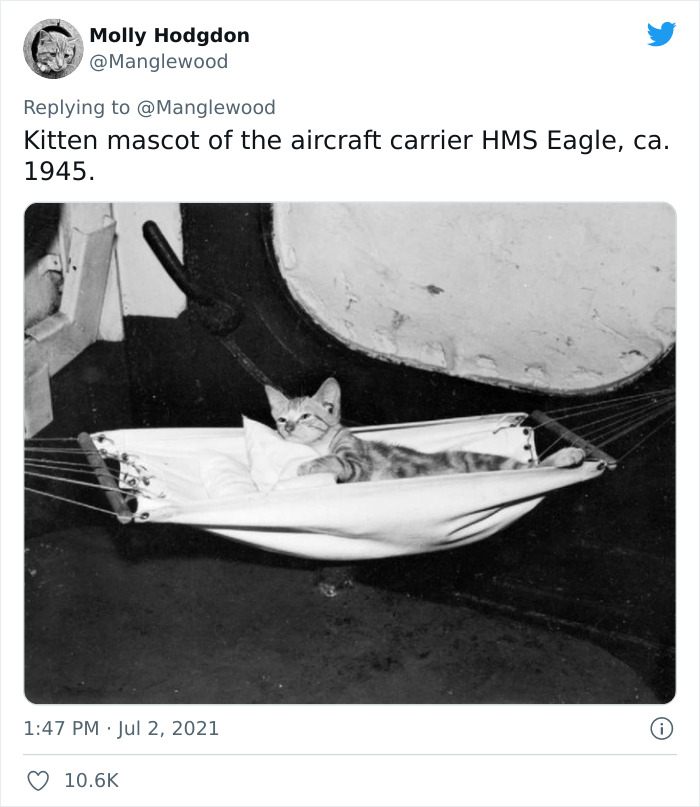 For example, sailors’ wives would keep a black cat at home as they thought that it’d use its powers, which would serve as some sort of protection for their husbands at the sea. 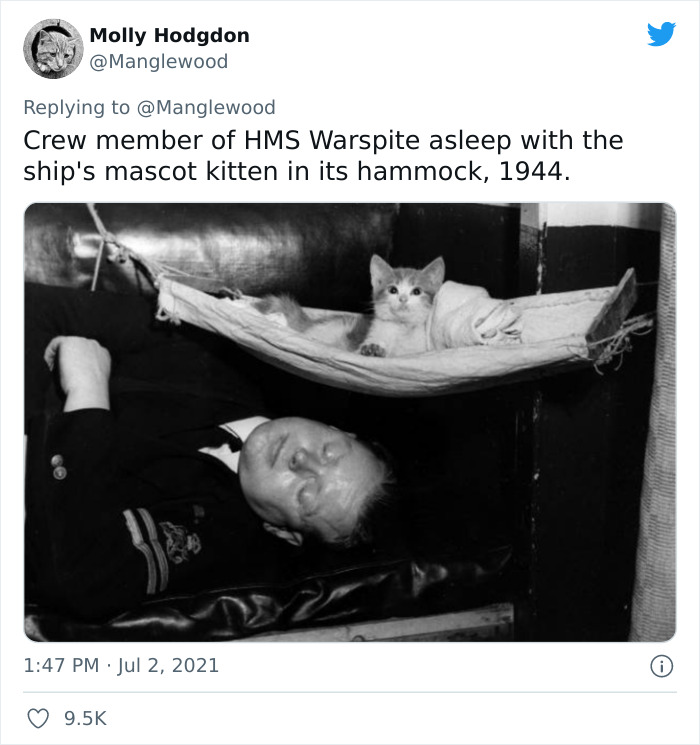 Sailors themselves considered it to be a lucky sign if a cat would come upon the deck and unlucky if it would only come halfway and then turn around. 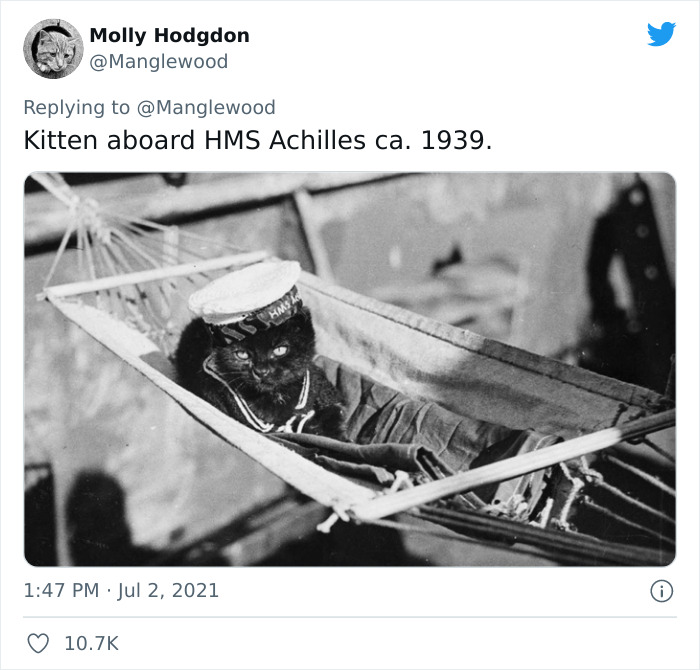 Many others also thought that a cat’s sharp eyesight would help them out during a shipwreck at night, as they could easily detect distant lights. 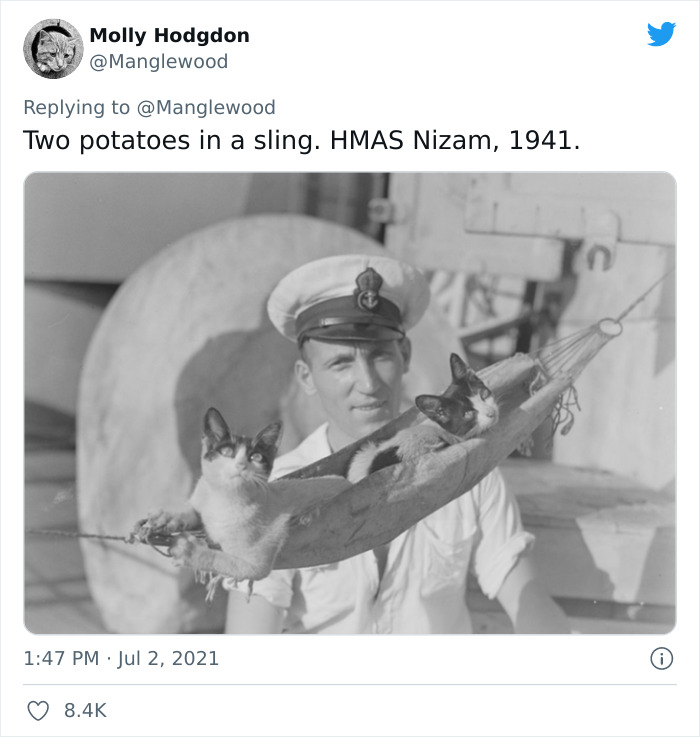 The Twitter thread went viral soon after, getting over 85k likes and over 22k retweets 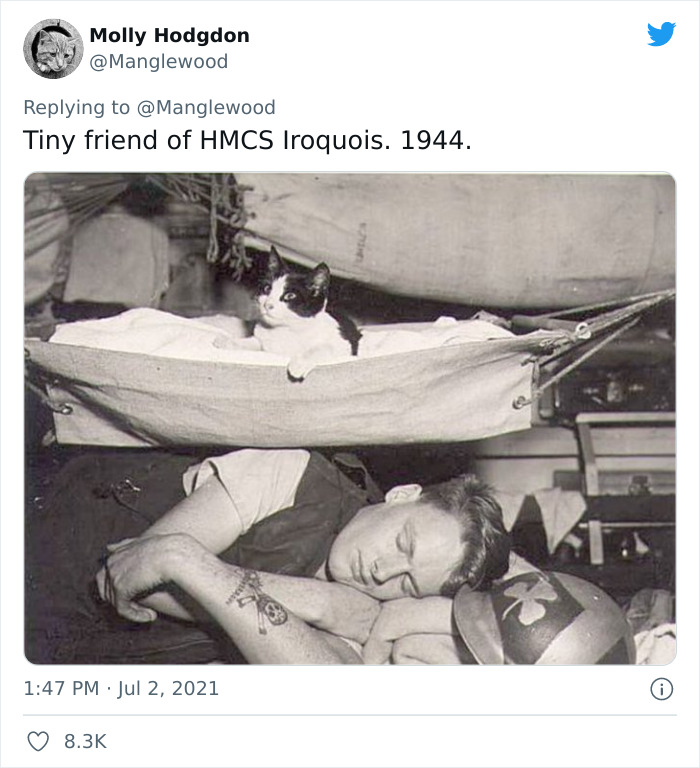 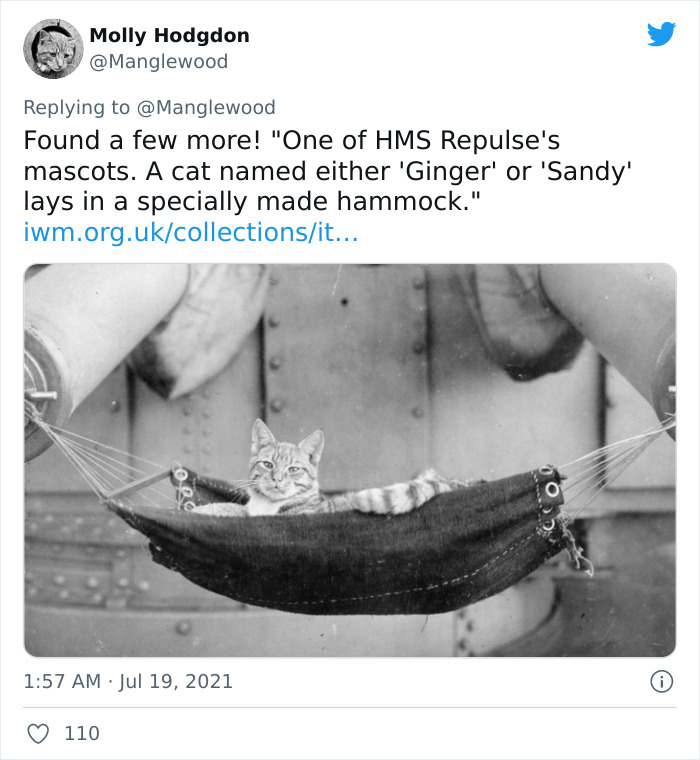 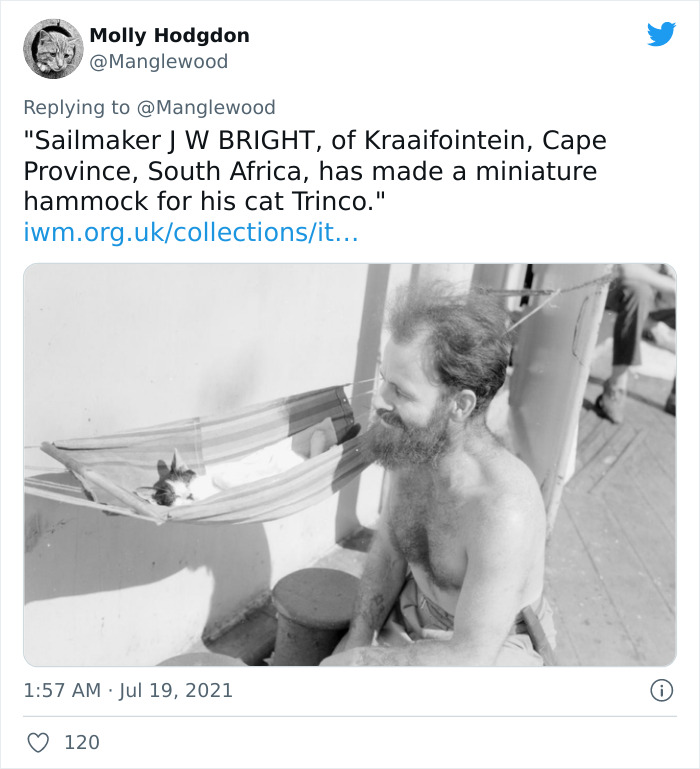 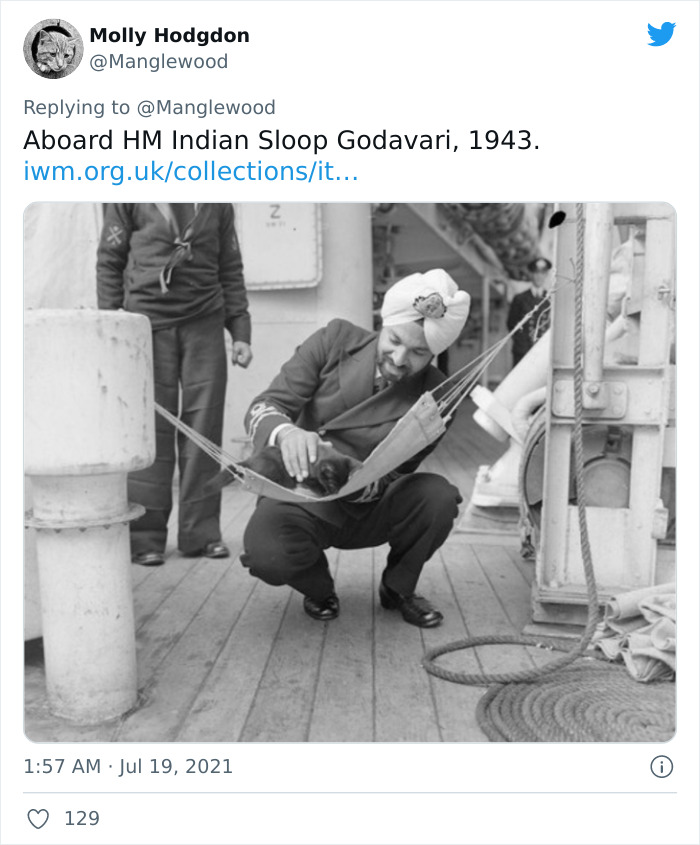 Most of these photos were actually taken around WWII 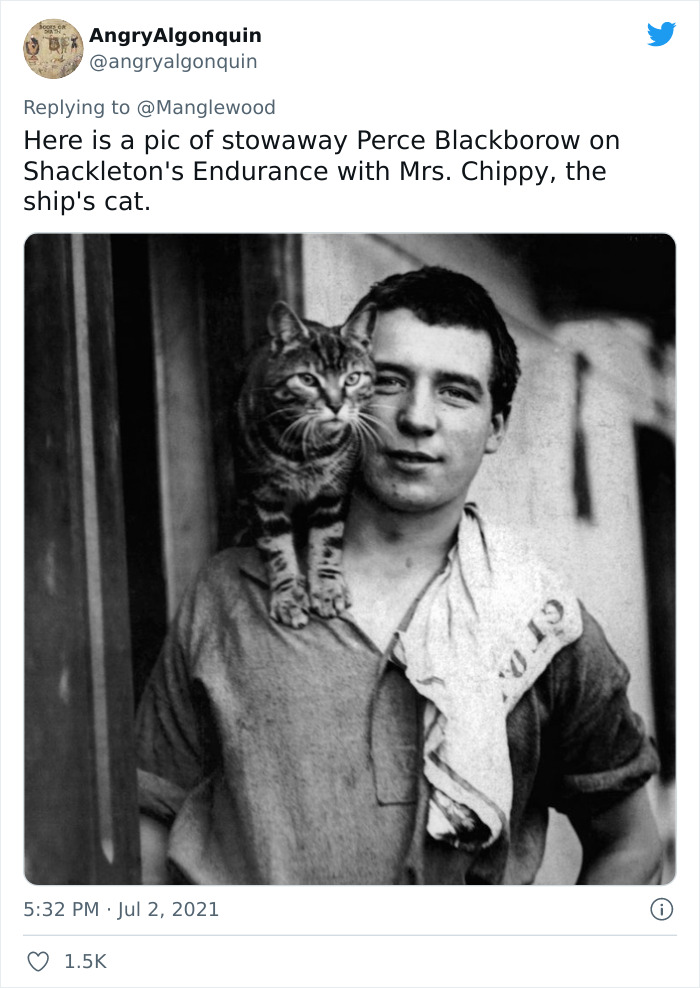 Talking about a shipwreck—there was a cat named Oscar on a German battleship. When the ship sunk, Oscar survived and got picked up by a different craft. He relived the same story three times until it was decided to give him a permanent home on land. And once Oscar got assigned to a new place, he was given a new nickname—Unsinkable Sam. 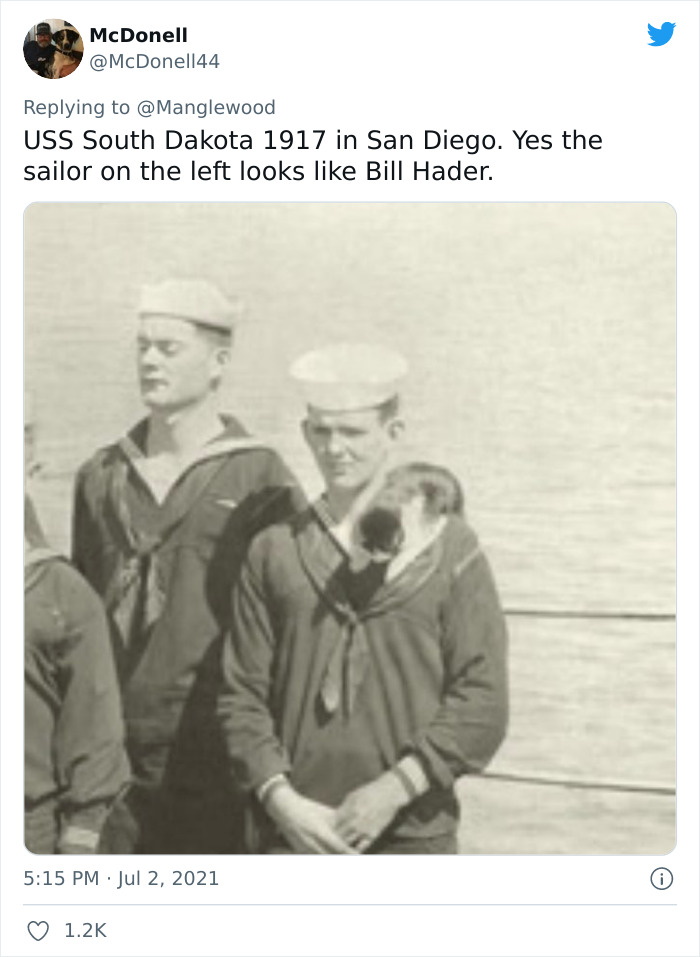 However, since 1975, the Royal Navy doesn’t allow cats or any other pets to ride aboard anymore due to hygiene concerns.

Here are the honorable mentions from the thread 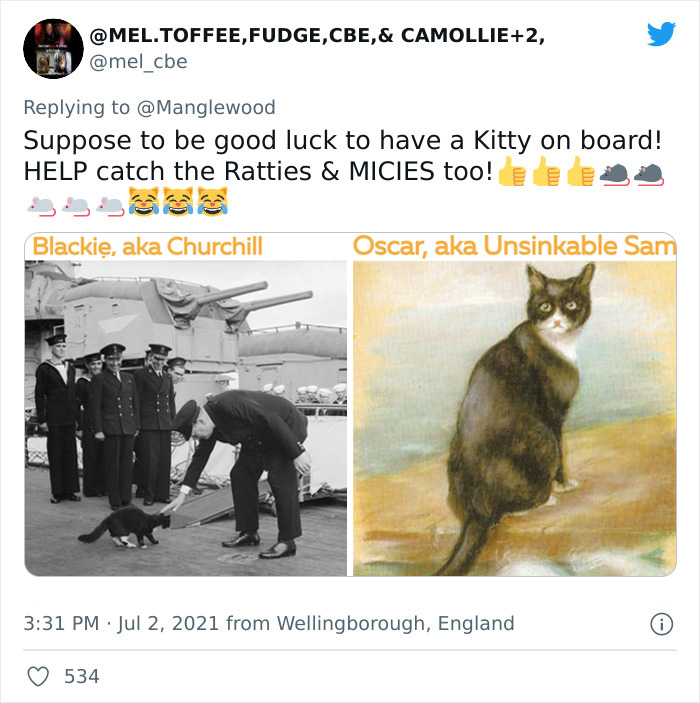 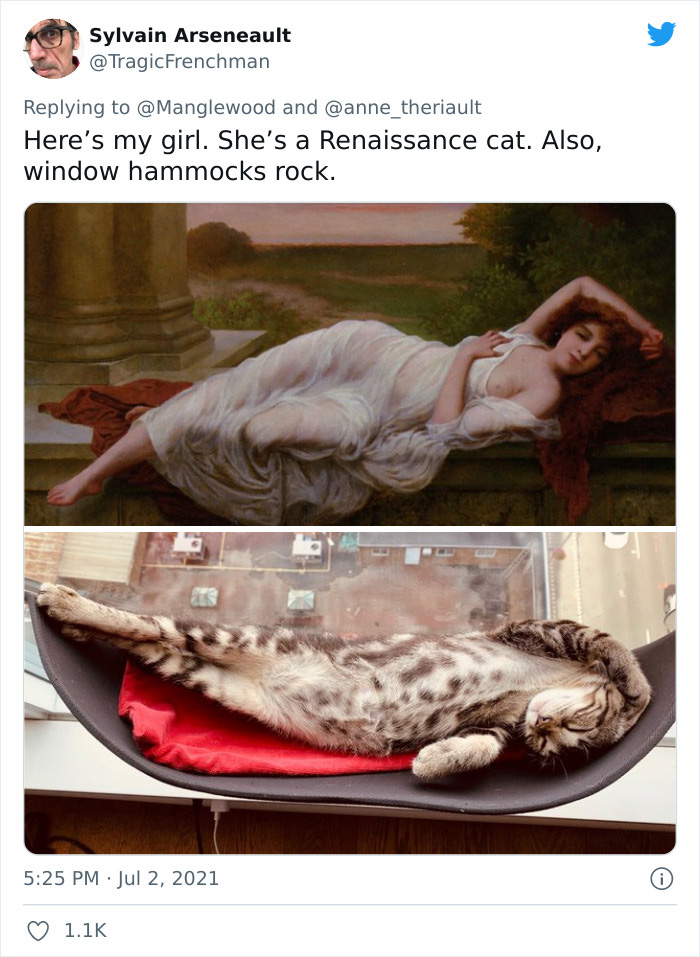 Some Twitter folks were so inspired by the post that they decided to reply with their own pictures. 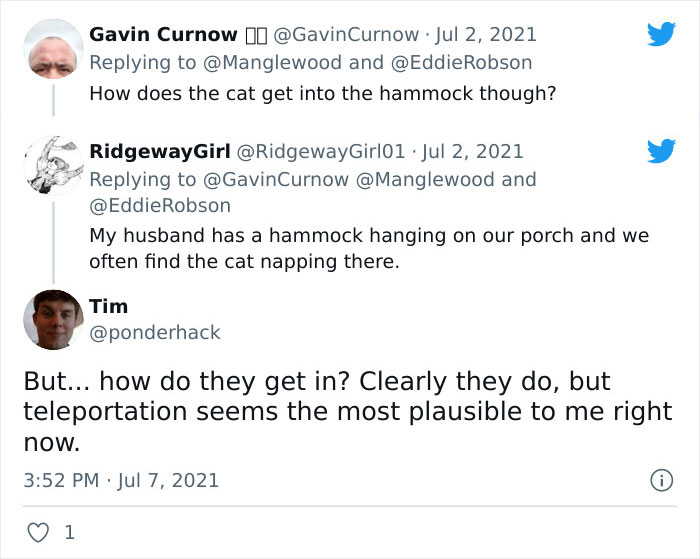 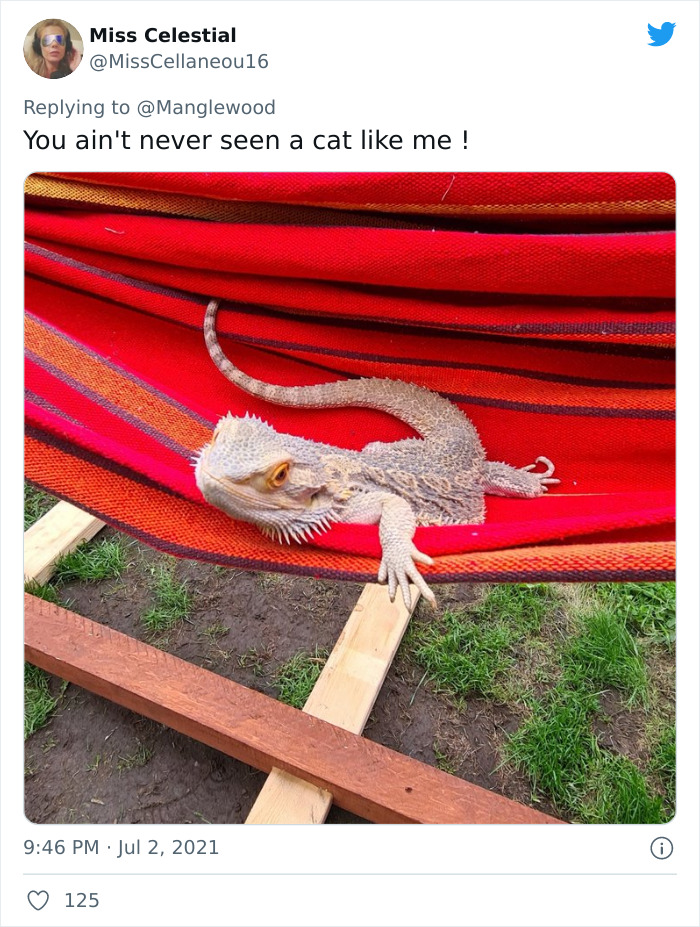 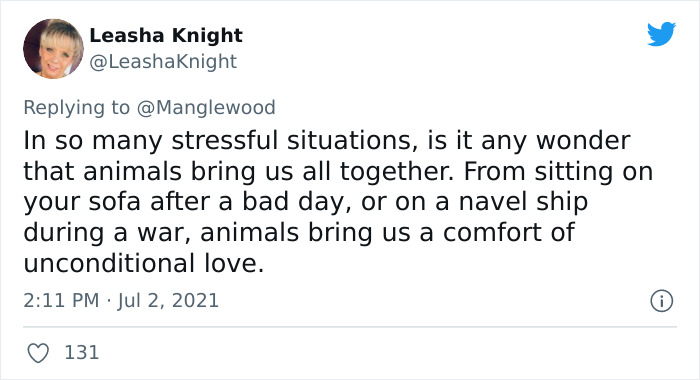 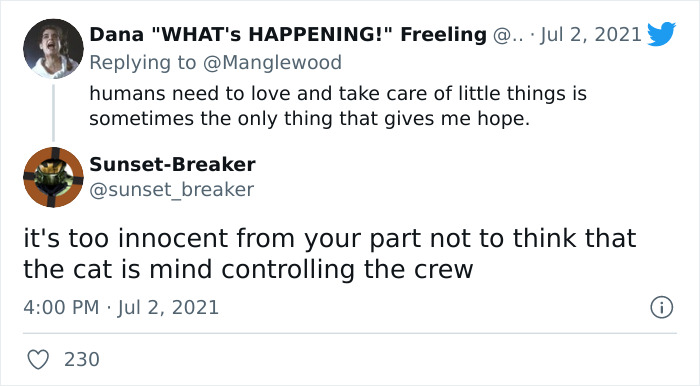 Some were thinking about how the cats were definitely mind-controlling the crew. 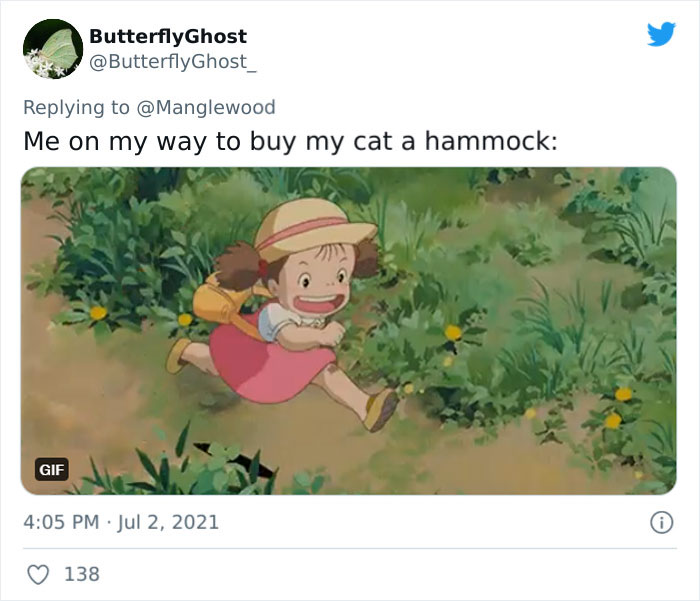 The post was warmly welcomed as it received 85K likes and almost 23K retweets. Bored Panda hopes that you enjoyed reading this article and is eager to know if you’ll be DIYing a hammock for your cat!

Share. Facebook Twitter Pinterest LinkedIn Tumblr WhatsApp Email
Previous ArticleThis Online Group Is Dedicated To Collecting Makeup Fails, And Here Are 208 Of The Worst Ones (New Pics)
Next Article Folks Are Cracking Up At These ‘Alternative’ Names For Common Things As Said By Kids (33 Tweets)