Even though we’ve come a long way since the pandemic started and we got over the initial panic when countries closed their borders and practically shut down all businesses to make people stay at home to not spread the virus, some restrictions are still in place. Like the requirement to wear masks, which are a very easy and cheap way to control the spread of the virus.

In many places in the world, people who don’t wear masks don’t get served or even let in to some establishments. And there is a group of people who think that this means that their rights are restricted, not understanding that sometimes you sacrifice the convenience of not having anything on your face in order to possibly save someone from contracting a deadly virus.

Such a group of people came to a restaurant in North Carolina and when they were refused service, they went to Google Reviews and left one hell of message that the restaurant owner put on a T-shirt. 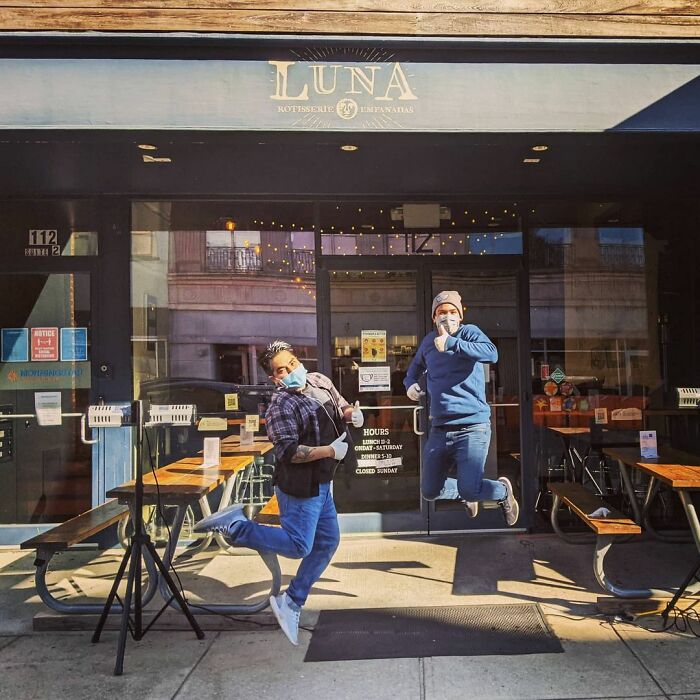 The restaurant Luna Rotisserie in Carrboro, North Carolina shared a post on their Instagram telling a story of how back in spring, when the first mask mandate in all indoor public settings was announced, a group of people came in and demanded to be let in without masks.

The staff weren’t willing to risk the safety of their other clients and refused but offered seats in the outdoor patio. According to the restaurant, the group became aggressive but eventually left; however, they weren’t going to let it go. Later the business received a string of negative 1-star reviews and one of them was so hilarious you would want to put it on a T-shirt.

The restaurant explained that a group of anti-maskers were upset at not being let in without masks, so they left a ridiculous review on Google 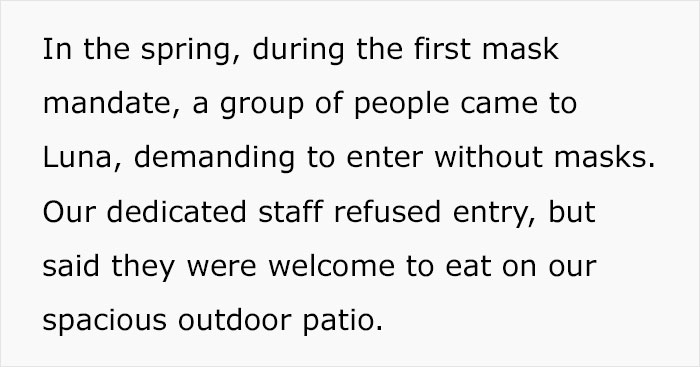 One of the people in the group wrote in the Google reviews, “This place is full of Satanic activity. As free breathing humans, we were discriminated against, the wait staff refused to serve our laughing, smiling faces. I cannot believe the treatment we received here, as if we were below them. If you like freedom, go elsewhere!!”

The client was frustrated that the restaurant was obeying the law and requiring people who come inside to wear a mask because they thought it was an infringement of their freedom, not considering that they might cause a string of events that could lead to someone possibly dying. 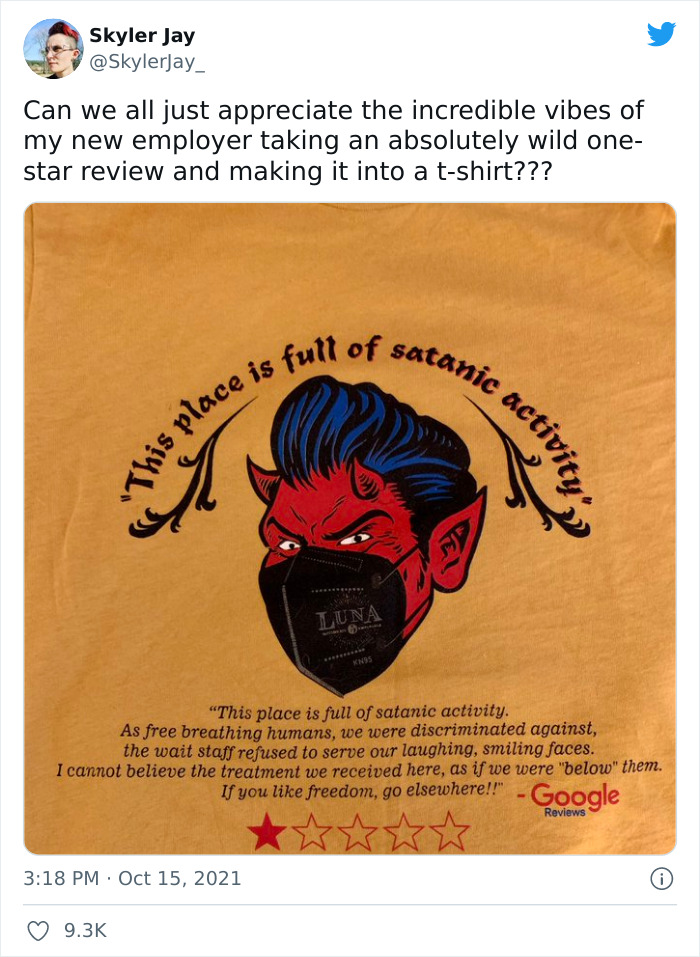 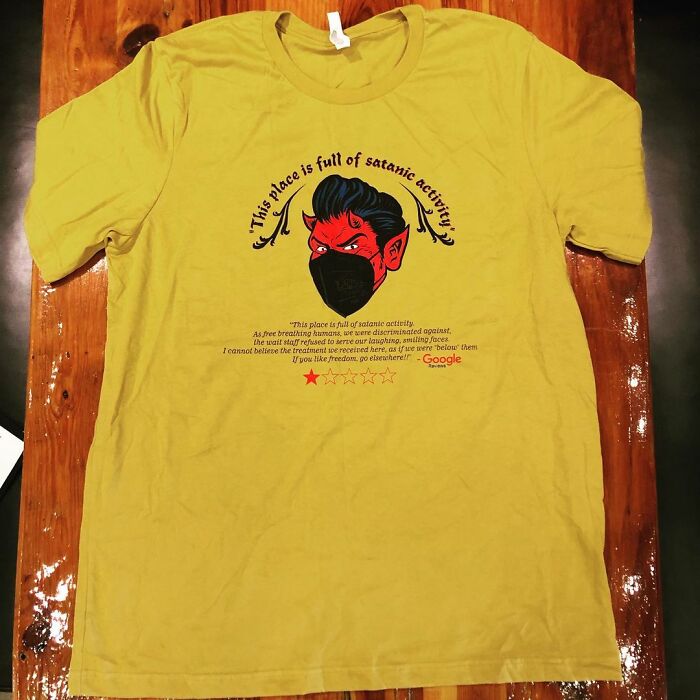 Even though the situation is serious and anti-maskers in all countries are considered to be wounds of society, the owner of Luna Rotisserie tried to make out the best of this experience and slapped the hilarious review accusing them of glorifying the devil on a T-shirt.

What is even better, there is a devil in the design and he is wearing a mask with the restaurant’s logo on it, making the T-shirt even funnier, providing another layer of irony.

At first the T-shirt was meant for the staff and family members, but the clients started asking for it too. But when a member of the staff, Skyler Jay, shared a photo of the print on their Twitter, it went quite viral. 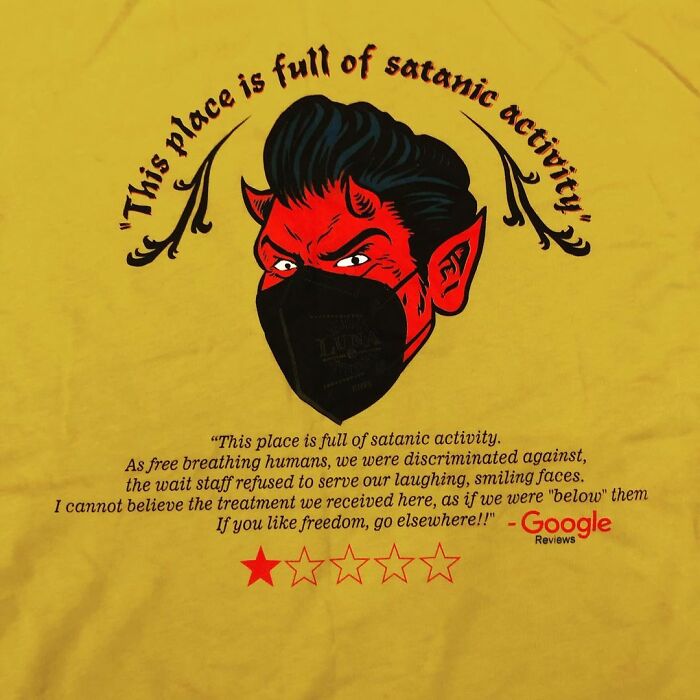 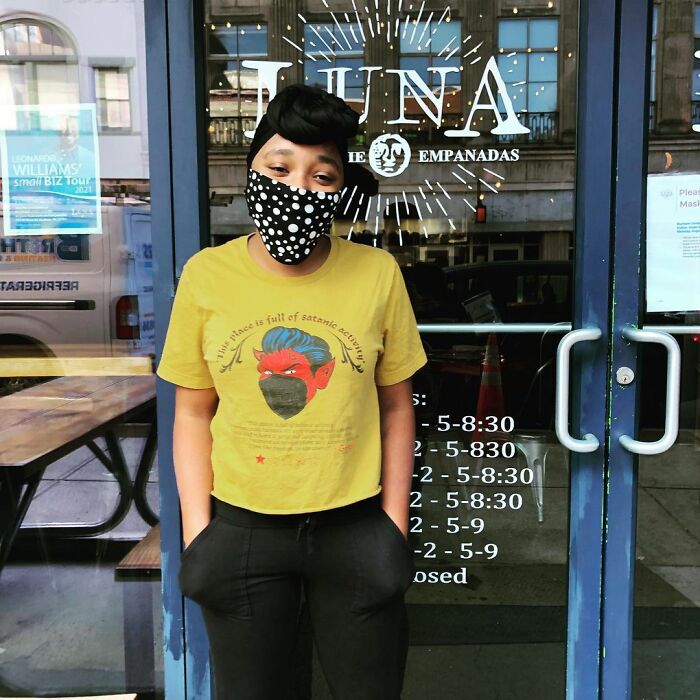 People who saw the T-shirt were amazed by the creativity and the outlook the owner of the restaurant had. Commenters were saying they wanted to both visit the place and order a T-shirt for themselves. Actually, the comments were overwhelmingly positive and it shows that anti-maskers constitute only a small part of society, it’s just that they scream the loudest.

What do you think of the restaurant’s idea to put one of their reviews on a T-shirt? Do you think that it’s a fun way to deal with anti-maskers? Or do you think it might be harmful to bring attention to this kind of commentary? Leave us your thoughts and reactions in the comments section! 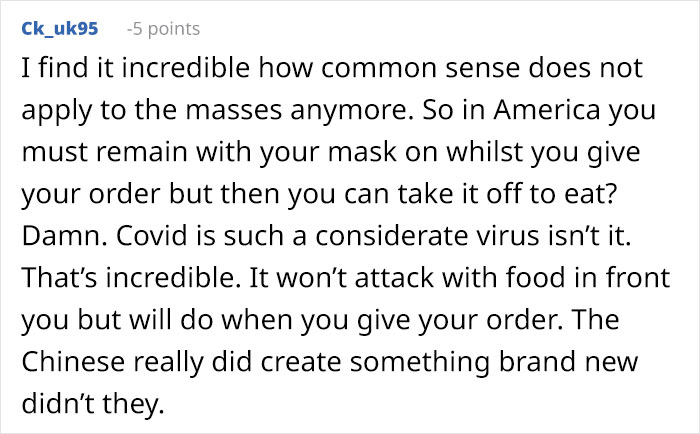