This Store Called A Prospective Employee For An Interview, Told Them That They Lied About The Job Location And Salary On The Listing


Usually you worry about advertisements being fake when you are buying something because there are so many scams online, you have to be really careful to not give away your money to a random person not selling anything and looking for an easy profit. There is less worry about false information in a job description, but apparently it does happen, even though it really doesn’t do any good for a company’s image.

Reddit user BesottedCoot was a victim of false advertisement and the whole situation is filled with so much drama that you won’t believe what happens next. The Redditor got a job interview and turns out they lied in it so that the current deli manager wouldn’t find out they wanted to fire him. 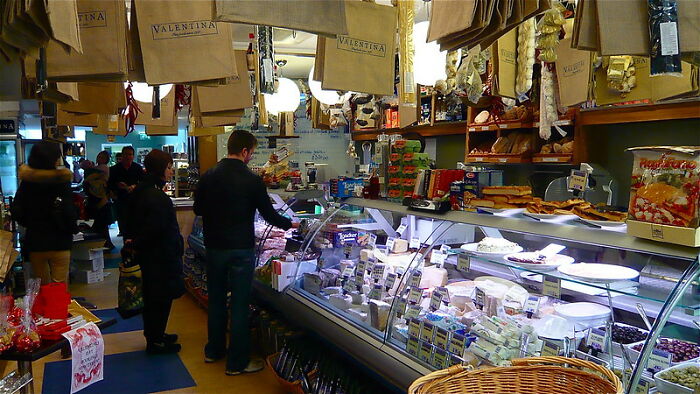 The Original Poster (OP) has 6 years of deli experience and another 2 as a manager, so they were looking for a similar job that wasn’t too far from home and accessible by public transport.

The person was offered a job interview at one place in North Dublin that would have been a 30 minute train journey away from home, so they agreed to have a conversation. However, the area manager asked to meet in a different location in South Dublin, which was the first obstacle. The OP had to ask their husband, who took a morning off from his work, to take them to the location because it was not an easy location to reach by bus.

When BesottedCoot arrived, the first thing the interviewer told them was that the location they were currently at would be the actual workplace. The explanation for lying in the job listing was because they didn’t want the current deli manager to find out he was being fired, so they put in a different location.

Bored Panda reached out to BesottedCoot and we asked if there were any weird things they noticed. And they actually did. The interviewer “made it a point to mention that most of the employees were foreign, like it would be an issue for someone who was Irish (of course it is not). The interviewer also mentioned they were incredibly busy and DESPERATE for staff, but couldn’t pay me any more than 12 because they didn’t have the same business post COVID lockdowns, which makes no sense.” It is worth noting that the job description said the pay would be €15 ($17) per hour.

Turns out, they lied in the job description because they didn’t want the current manager to find out he was being fired 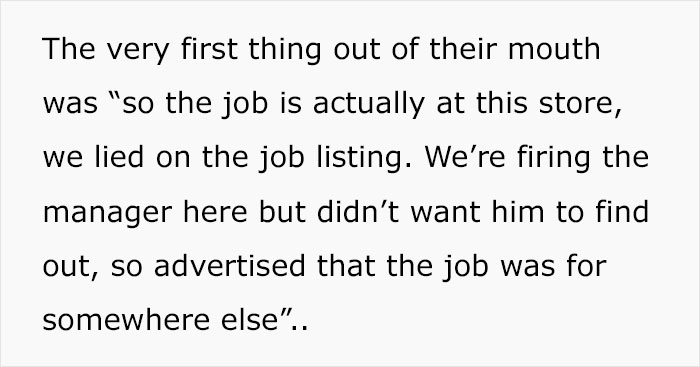 The person who was supposed to be fired was actually working at the time of the job interview and the OP was told not to speak to him as he still didn’t know he would be losing his job.

We asked if the OP confronted the people there for lying in the job description or expressing their opinion about how they felt about going behind an employee’s back; BesottedCoot said that they just wanted to get out as quickly as possible because of how bizarre everything felt and that they were upset that the interview didn’t end up fruitful.

Also, they said they wouldn’t pay the amount indicated in the advertisement as they couldn’t afford it

There is more! The OP contacted the manager they were supposed to replace. BesottedCoot described how the guy reacted to the news, “He was very taken aback by it all and quite frustrated, though not at me. He said that he was angry but not surprised because the company were treating him very poorly (unpaid wages, overworked, treating him differently to other employees). He seemed upset but I think me telling him actually gave him a push to confront them about it.” In the post, the OP mentioned that he was a dad of 4 working 70 hours a week, which means 14 hours every day and not being paid for all his hours on top of that.

The man confronted his boss about this and the area manager said that BesottedCoot was a liar and was making everything up. Now the Redditor is waiting for another update from the manager as he will be talking with his boss and owner of the store.

What do you think of this story? Do you have your own crazy job interview experiences? Leave your reactions and stories in the comments! 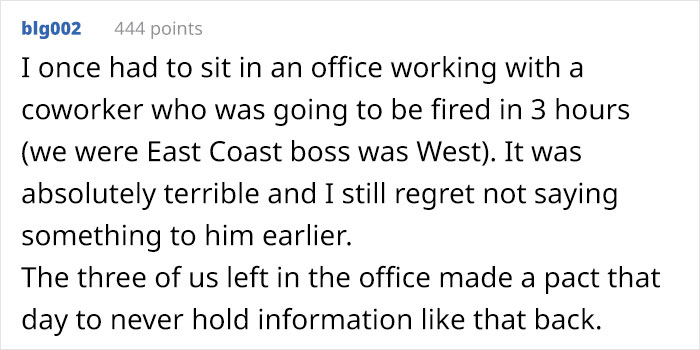 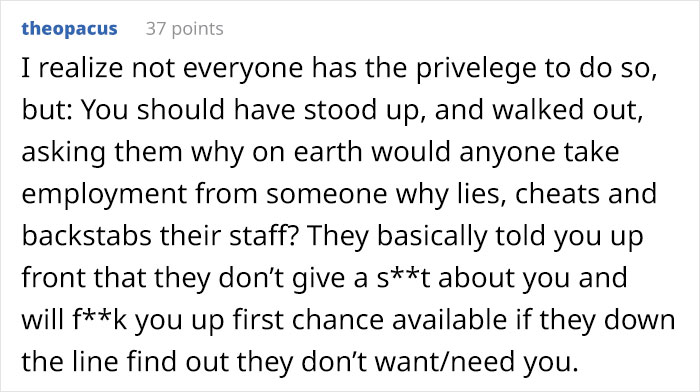