Attending a wedding should be a fun event as it is an opportunity to dress up, maybe meet people you haven’t seen in a long time, and just have fun in general. It is also the day when a person you care about decides to have this big celebration of finding their love, so it should be all around an enjoyable day.

But weddings are also known to be events with a lot of drama surrounding them as the organizers are often tired and stressed, wanting everything to be perfect. Sometimes it can lead to serious conflicts, as Redditor BlueRoses95 shared. She went to her friend’s wedding and before it even started, she got in a fight with the bride over a necklace. 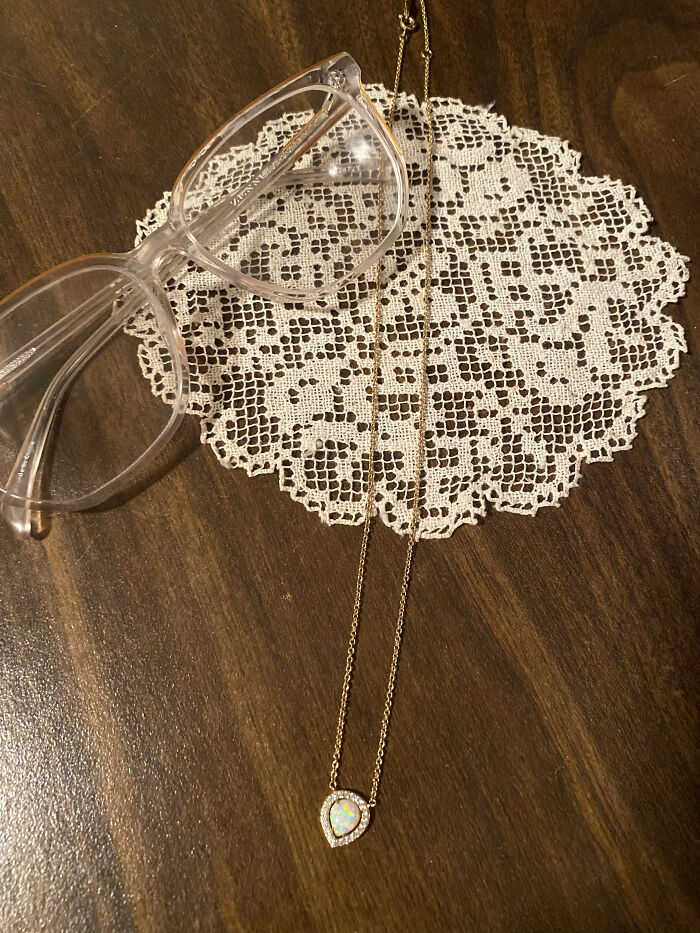 The Original Poster (OP) is a 31-year-old woman who was invited to her high school friend’s wedding and was asked to be one of her bridesmaids. She knew that she wouldn’t know any people in the party well, except for the bride’s immediate family, but she decided to come anyway to support her friend who is named Mary for the purposes of the story.

BlueRoses95 was planning on coming with her own fiancé, but he got sick with Covid right before they were supposed to leave, so that meant the OP had to go alone as she tested negative and they don’t live together. 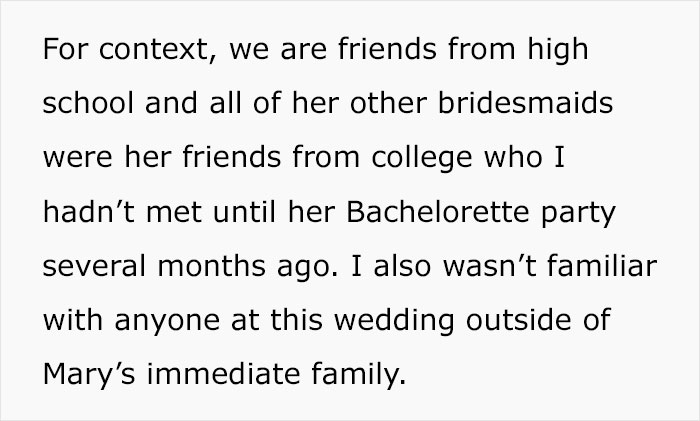 An important detail in the story is how the woman got her necklace. A couple of months before the wedding, she and her fiancé celebrated their 5th anniversary. To mark the occasion, the fiancé gifted the woman a necklace that he thought she could wear at the wedding as it complemented her bridesmaid dress.

The OP asked Mary if it was alright if she wore her own jewelry and the bride wasn’t opposed to that, so BlueRoses95 was happy to wear it as in some way, it represented her fiancé who couldn’t make it to the wedding. 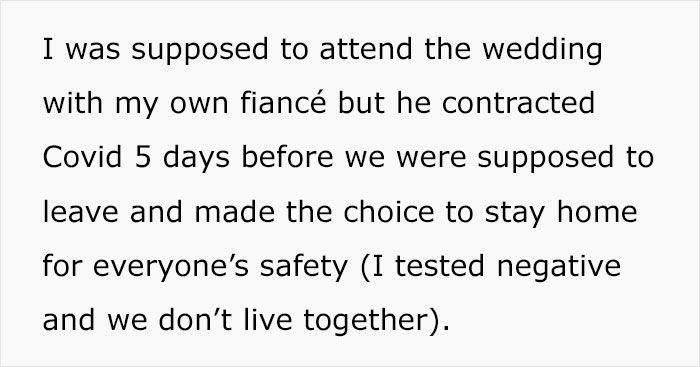 Unfortunately, the fiancé couldn’t go to the wedding because he contracted Covid, so the bridesmaid went alone

The drama started when the bride saw the necklace and fell in love with it. So much so that she asked if they could switch their necklaces. Everyone was enthusiastic about the thought because it would be something borrowed.

There is an old wedding tradition originating from England’s Victorian Era that says a bride should wear “something old, something new, something borrowed, something blue, and a sixpence in her shoe” as it will bring luck to her life.

The bride liked the necklace so much she asked to switch them for photos, but the bridesmaid refused as it was a gift 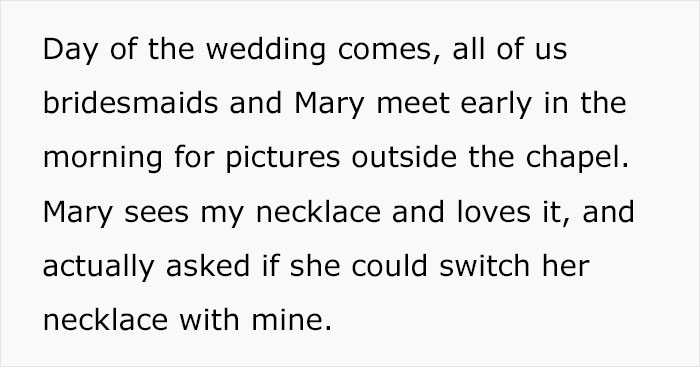 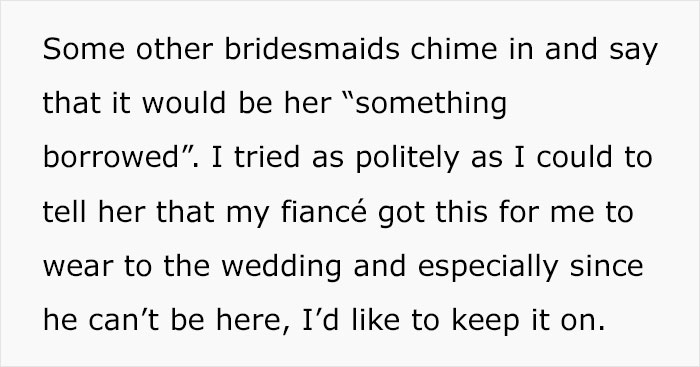 That is why everyone thought that it would be really nice if the OP could give the necklace to the bride. But she wasn’t willing to do that as it was an anniversary gift, so Mary asked if she could at least take it off for the photos because it was more beautiful than her own jewelry. The OP refused again because she wanted her fiancé to see her in the necklace when she shared the photos with him.

That made Mary and the other bridesmaids get angry with her and the celebration from then on wasn’t fun at all with Mary’s friends giving her dirty looks and being unfriendly. Later, Mary’s sister came up to the OP and told her how rude of her it was to upset her friend like that on such an important day.

The OP posted this story a week after the incident and she couldn’t stop thinking about it. After all, Mary was her friend and she made her feel bad at her wedding. So she is asking if she was really that big of a jerk.

What do you think? Was the OP in the right to refuse to give Mary the necklace as it was an anniversary gift? Or the OP should have been more accommodating on her friend’s big day? Let us know your thoughts! 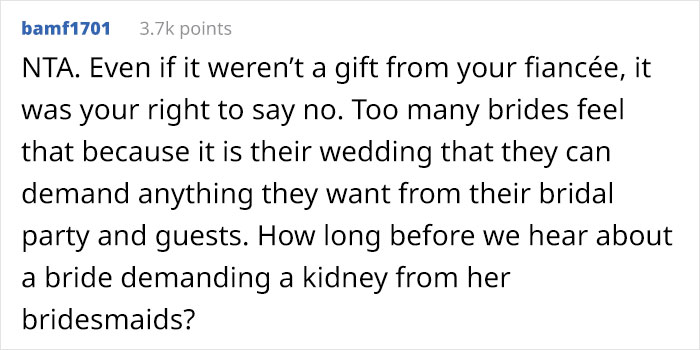 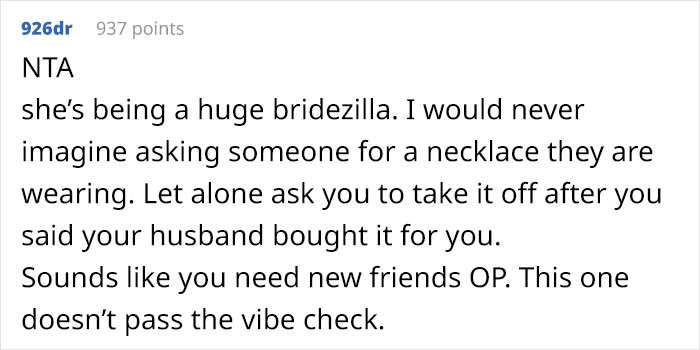 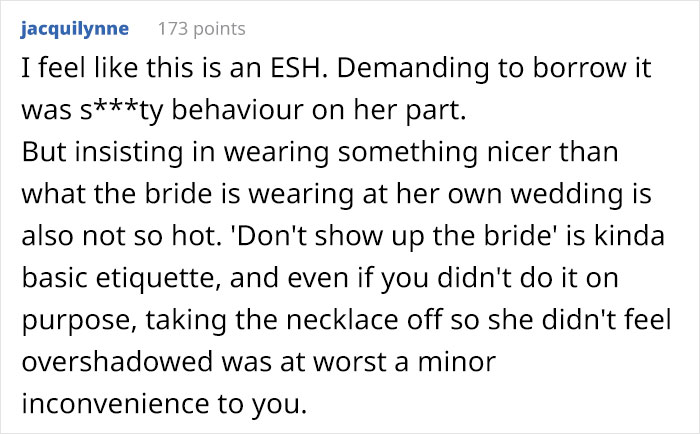