“It Is So Disturbing”: Woman On TikTok Sheds Light On How The Bodies Of Fitness Models Can Be Altered Before Photoshoots


People have the tendency to reject anything that is irregular or doesn’t fit the image of what they consider to be normal. It is really hurtful when that image is of a person because despite how many times we repeat that appearance doesn’t matter, at the end of the day, people still value it.

People look at others and compare themselves, finding what they think are flaws in their own appearances. They might try to fix themselves and get hurt in the process or they will be left with a heart full of hatred towards themselves.

It doesn’t help that now it is so easy to compare yourself with others because you can follow their lives on social media. But what you are comparing yourselves with is a non-existent body. Photos and even videos can be edited, plus enhancements can be made in real life too. TikToker jessicaemilyquinn showed a video of a fitness photoshoot in which the model can be seen putting in pads to make her bottom look fuller and it opened up people’s eyes. 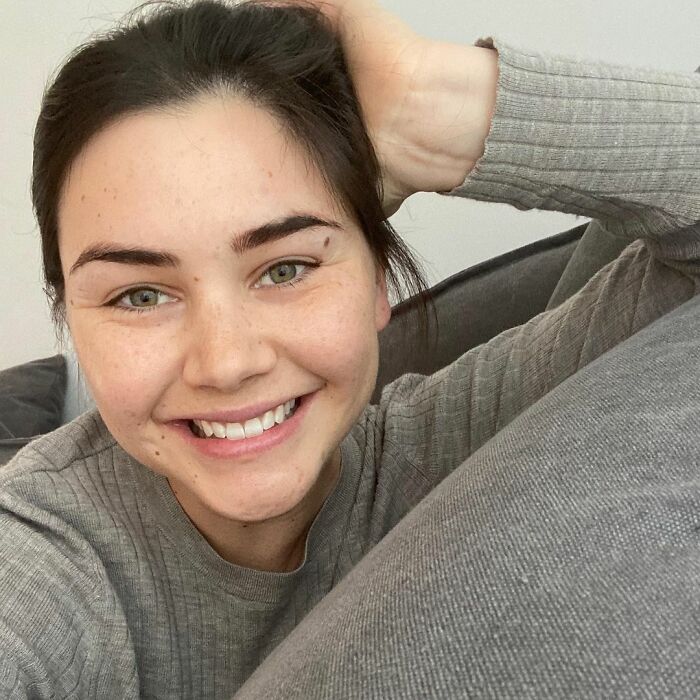 The TikToker jessicaemilyquinn is also known as Jess Quinn and she is a cancer survivor, a model, an athlete and a body positivity advocate. She has a TikTok account with 176k followers and on Instagram she is followed by 190k people. On those platforms she spreads the message of self love and appreciation.

Due to a tumor in her leg, she had an operation called a rotationplasty, which is a surgical procedure in which a surgeon removes the middle part of the leg with the tumor and reattaches the lower part of the leg rotated 180 degrees. So the 29-year-old woman knows what it means to be different and not fit into beauty standards. Despite that, she doesn’t mind it and loves herself just how she is. 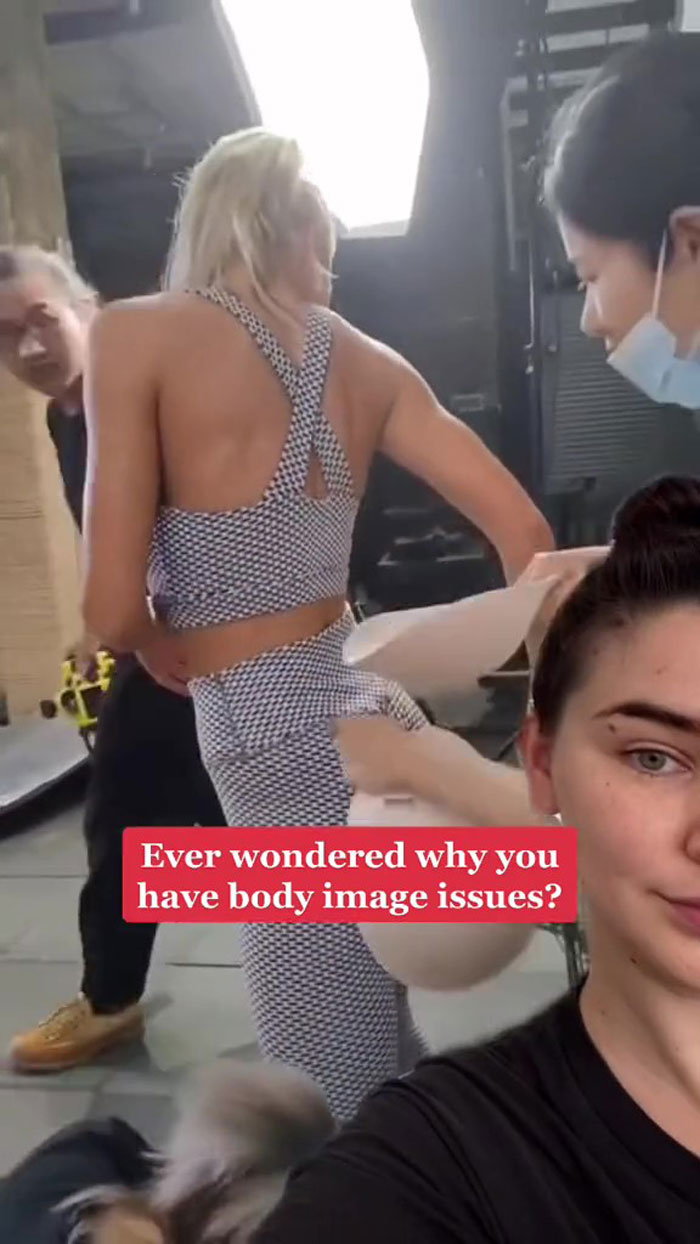 But she understands that it’s not the case for everyone. Actually, in another of her videos, she shares some statistics that shocked her. She found that 91 percent of women are unhappy with their bodies.

And she thinks that what contributes to that is bodies women see in photos and not realizing they are fake and don’t represent real life. It’s a public secret that models don’t look exactly the same in real life as they do in photos, but those images are everywhere and you can’t help but start thinking that this is what you’re supposed to look like, especially when they are so realistic.

Bored Panda reached out to Jess and she shared a little bit more of her thoughts about the topic. We asked if she thinks that people behind the photoshoots know how damaging their actions could be and the woman is convinced the answer is yes. She also adds, “I think some people will push back but having modelled a lot myself I can see how easy it is to get caught up in the shoot on the day and also not wanting to push back on the brand or company that hired you. But, I do think models have an opportunity to take responsibility and put their foot down on what they are and aren’t willing to do with their body.”

She said that this is not something new and she is aware of others doing it, but it doesn’t make it right 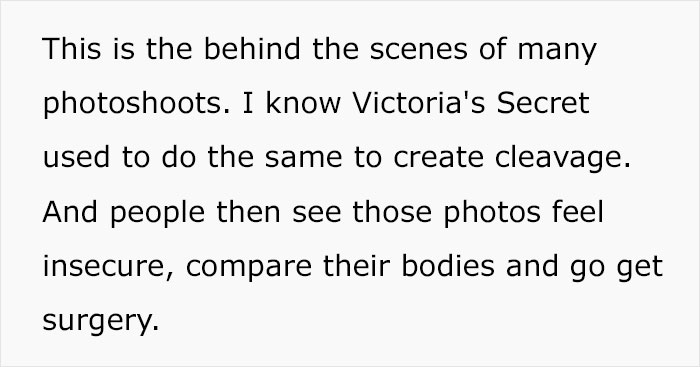 In the video Jess is showing, you can see that the fitness model is prepared for the photoshoot by inserting pads in her leggings to give her more curves. There have been so many times when celebrities and models were caught editing their photos to make their hips wider and waist smaller, but it can be detected.

It seems that professionals are trying to protect themselves from the sharp eyes of consumers by making the model’s figure look like they want to without needing to manipulate the image later. 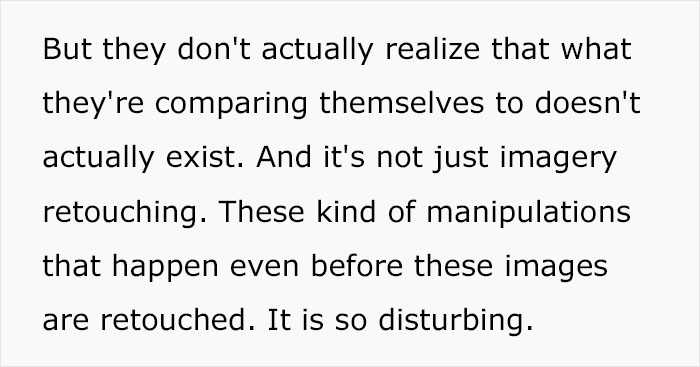 According to Jess, this behavior makes other women feel insecure, constantly think about what is wrong with their bodies and want plastic surgery. She feels that it is disturbing that faking a body type is normal and common.

A lot of people in the comments agreed that people behind photoshoots are not thinking about what consequences and influence their photos have. Especially when it is in the fitness industry, which shouldn’t show people bodies that are so hard to attain that fitness models themselves don’t have them. Of course, some of them do, but somehow the minority is represented by the media more than what an average body looks like. 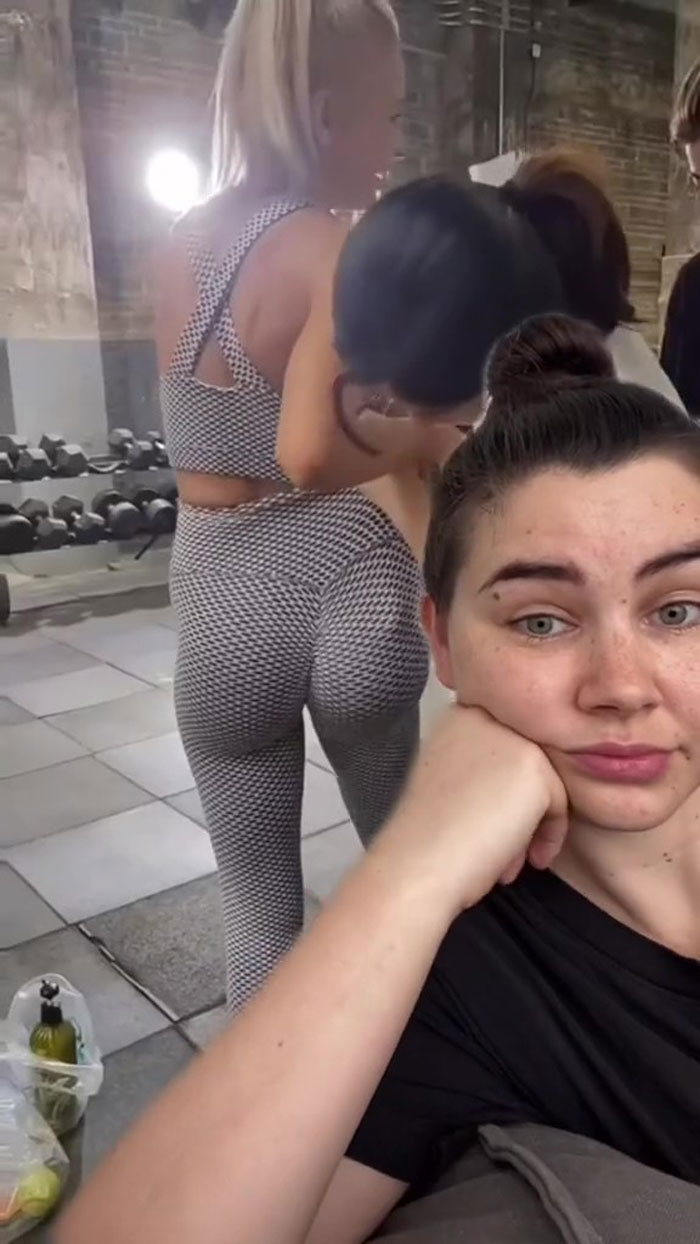 Jess comments more on what is the big deal of making models look different for photos: “We compare ourselves all day to what we see online, on social media and in magazines, billboards and on TV. We then judge ourselves based on that comparison. If we are seeing something that doesn’t actually exist in real like then we are comparing ourselves to a beauty standard that doesn’t even exist. By manipulating people and images to fit an ideal we are only putting unnecessary pressure on others.”

To those who have a simple answer of suggesting just choose not to compare, the woman has this to say: “It’s much more complex than that. Only 8% of a brand message makes its way to our conscious brand, the rest we rework in our subconscious so things are affecting us more than we realise. We also have spend so much time fighting for women to have equality, to be in the workforce but yet we are still pushing this message onto us that there is a certain way we should look and that being ‘beautiful’ (whatever trend that looks like at the time) is what’s important when that’s not true. I know for sure that I don’t want my niece growing up in a world where thinks her worth is in the way she looks and that she has to keep up with ‘beauty trends.’” 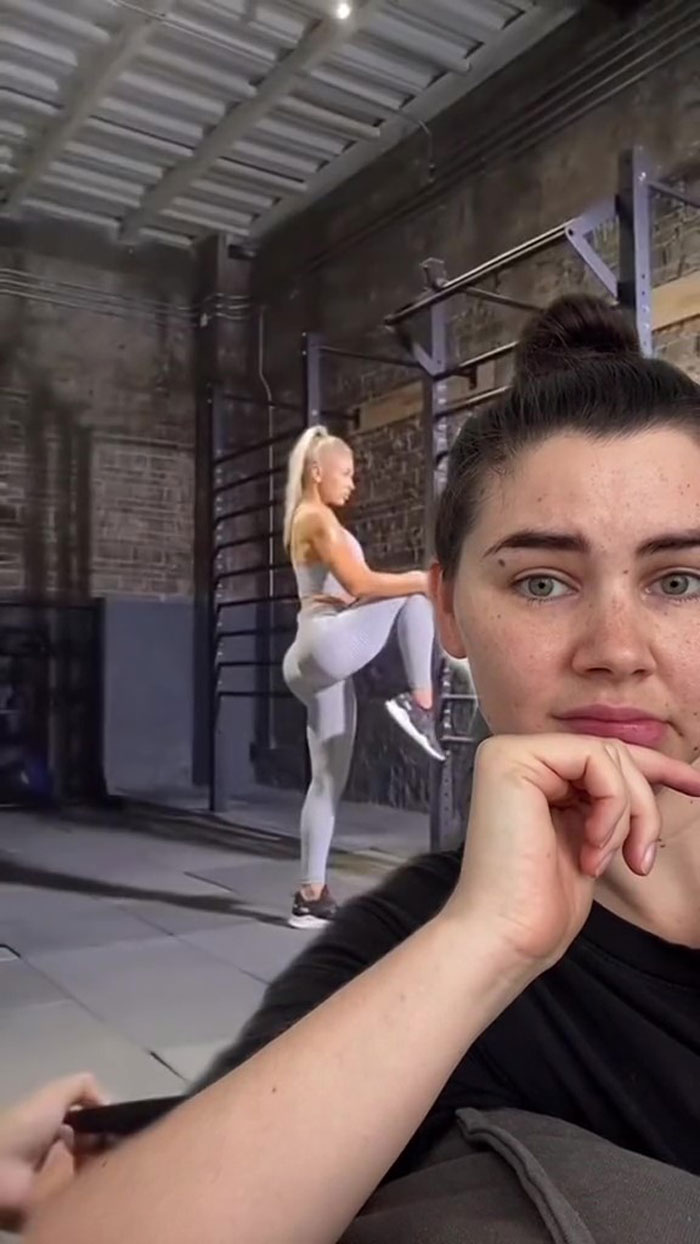 Another problem Jess sees is that beauty standards change, like fashion trends: “In the 90’s the trend was to be as skinny as possible, then we went through an athletic aesthetic and now it’s the Kardashian booty – if we are constantly manipulating our bodies to meet these ‘trends’ then we will never be happy in our own skin.”

Jess gives an example of how trends effect people: “I read an article once about a plastic surgeon who has women bringing in the Snapchat-filtered version of themselves and saying, ‘I want to look like this after my surgery’ – I just find that so heartbreaking that our world is so filtered and manipulated that we are comparing ourselves with our own filtered version. I just don’t think I’m going to get to my deathbed and really wish I had that surgery to manipulate my body.”

Below you will find the video in question

@jessicaemilyquinn##duet with @willard503 this is why we have body image issues. ##bodyimage ##insecure ##foryou♬ THICK AS THIEVES – Jack & Charly

The TikToker doesn’t oppose to plastic surgery altogether, but she thinks people have to try and not let the way they look control their lives. She is also if the opinion that it is possible to love your body and want to change it at the same time, “I think it boils down to what we let control us. I lost my leg to cancer when I was a kid and I spent years wanting to change my body. I didn’t wear shorts, I hid my leg away as much as I could but then I realised I had fought so hard for a life I wasn’t truly living. So, I stopped. I stopped letting the way I look control my life and I think that’s a decision we can all make. Is it easy? No. But maybe if we stop filtering ourselves and fooling each other and show what humans really look like then we won’t make it so hard for each other to accept ourselves. ”

Videos are also not protected from editing, so they don’t always show the truth either 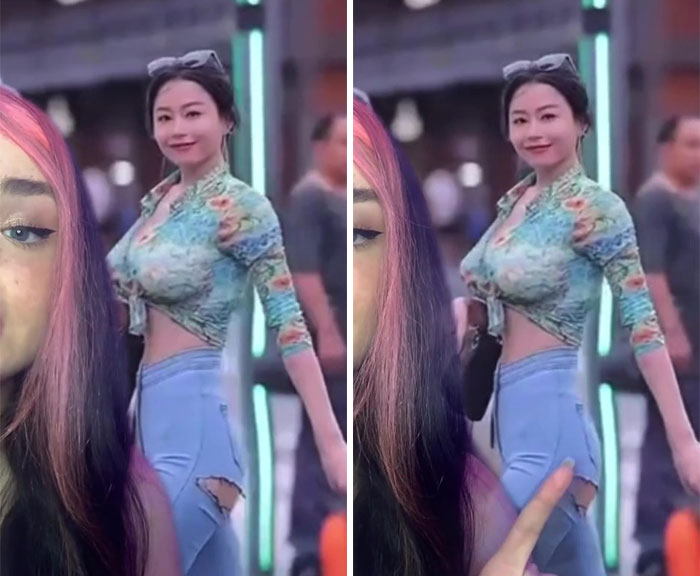 This is not the first time Bored Panda has talked about body image on social media. In another article, we talked about how the technology is so advanced that it can edit bodies in real time. And we’re not talking about Instagram filters that most often are quite obvious, but about the subtle changes that make a big difference.

In that article, we discussed a video of a woman who looks really tall and very slender, but after a closer look, you can notice a pole in the background that is distorted when the woman passes it. That proves that her waist is taken in and that tricks people into thinking that they should look like this because it’s what is admired and desired. 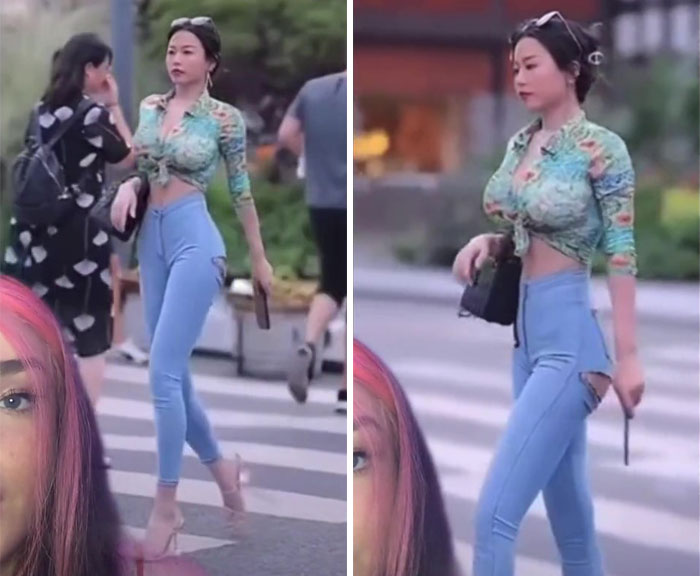 These are just a few examples that mess with people’s minds and make them feel unhappy about their appearances and disappointed when their hard work in the gym doesn’t give the results they expected. That can lead to more serious mental and physical health issues that is why Jess wants more people to know what happens behind-the-scenes and to make them understand that their bodies are fine just the way they are.

What do you think of this issue? Did the video of the fitness model putting in pads for photos surprise you? Maybe you think this is not that big of a crime? Do the photoshopped images make you feel insecure or can you distinguish between real life and the different life that is depicted in photos and videos? Leave us your thoughts in the comments!