This Teacher Went Viral With 3.2M Views For Sharing How Underpaid Educators Are


When you start going to school, teachers become like second parents to you, especially in elementary school when you spend the whole day with the same teacher. Not only that, but they give you knowledge, they introduce you to the secrets of the world and help you understand what your interests are. In a way, they have to be good psychologists, be able to react to unexpected situations, be fair and have many other important qualities.

With such big responsibilities of being such a big influence in a child’s life, they surely must be well rewarded for that. Unfortunately, that is not the case, as proved by this teacher from Cleveland, Ohio who disclosed that he earned  $31,000 in a year as a 4th grade teacher and that is before paying taxes.

A teacher went viral on TikTok when he revealed that his wage as a 4th grade teacher is $31,000 a year, which is about $14 an hour 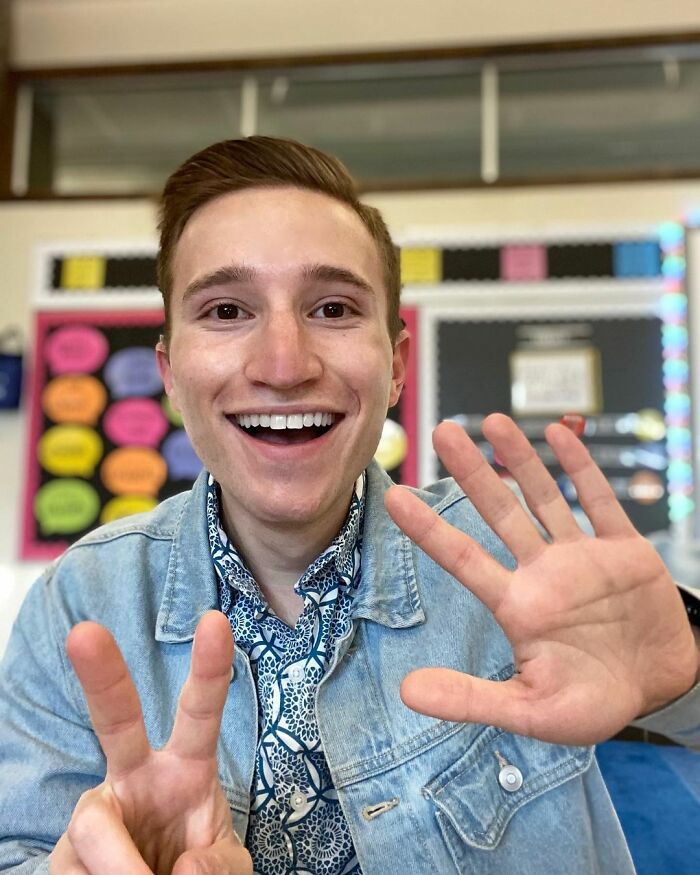 The teacher’s name is Kyle Cohen, who recently got his master’s degree in educational leadership. He is now teaching the 4th grade and he is the kind of teacher who hopes to be a positive change in the education system.

He uses his social media to talk about teaching, being an inspiration to others and sharing the issues his profession has to deal with. He has platforms on TikTok, Instagram and YouTube and invites you to hear what he has to say.

In the video that went viral on TikTok, the teacher wanted to share how he and his colleagues are quite underpaid. In the video, he discloses that his annual earnings were $31,000. Keeping in mind that Mr. Cohen has a college degree and came to this job with experience and has to teach a class of 16 students who also have a variety of special needs, the amount seems quite humble. 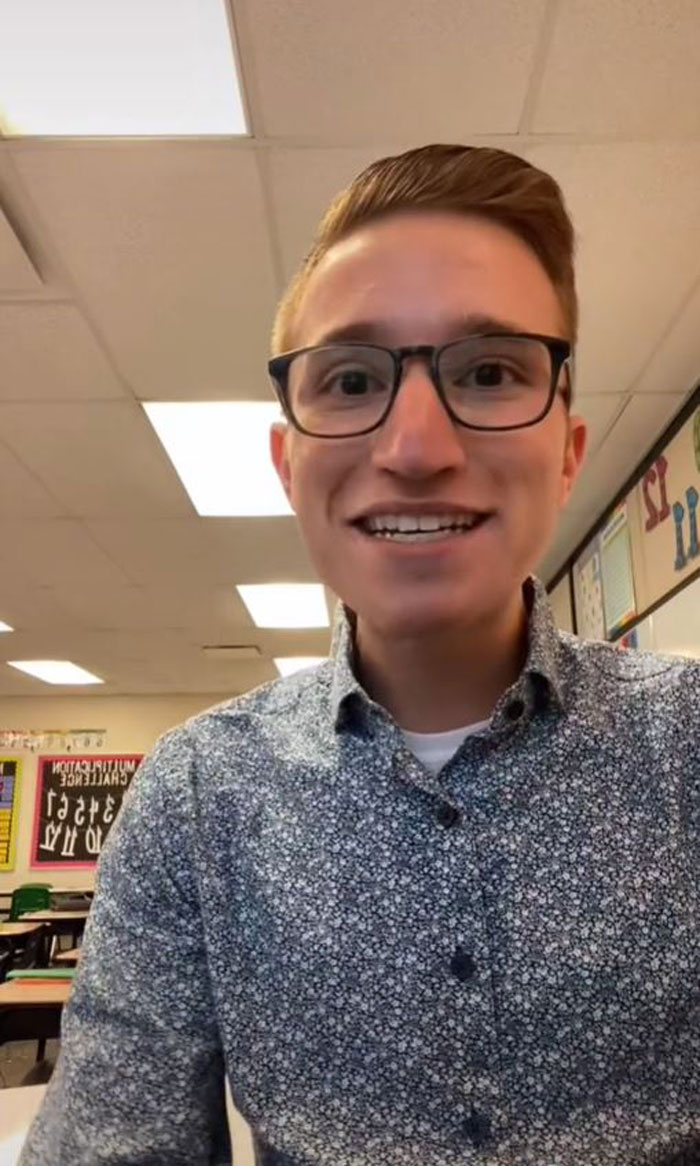 The video went viral with 1 million views and we wanted to ask Mr. Cohen what his reaction was when he saw that number. He said, “TikTok. Is. Crazy. In 24 hours one video was viewed over 1 million times. It’s impossible for me to even wrap my head around. It’s exciting to think that my message is being heard by so many. Teachers deserve the best.”

Mr. Cohen also told us that it is impossible to hide anything from 4th graders so they know everything about it and the teacher is happy that the response was only positive. 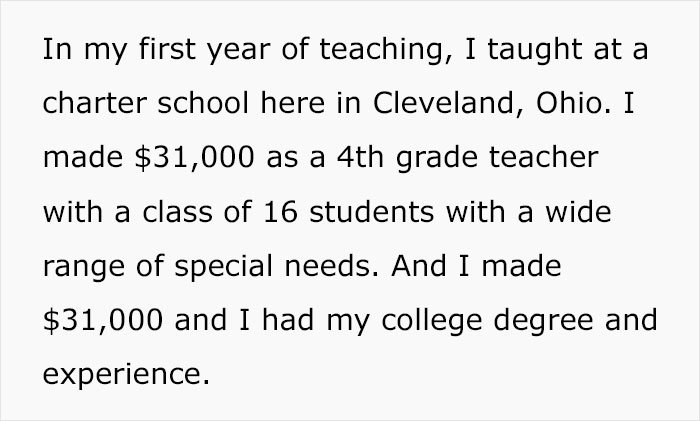 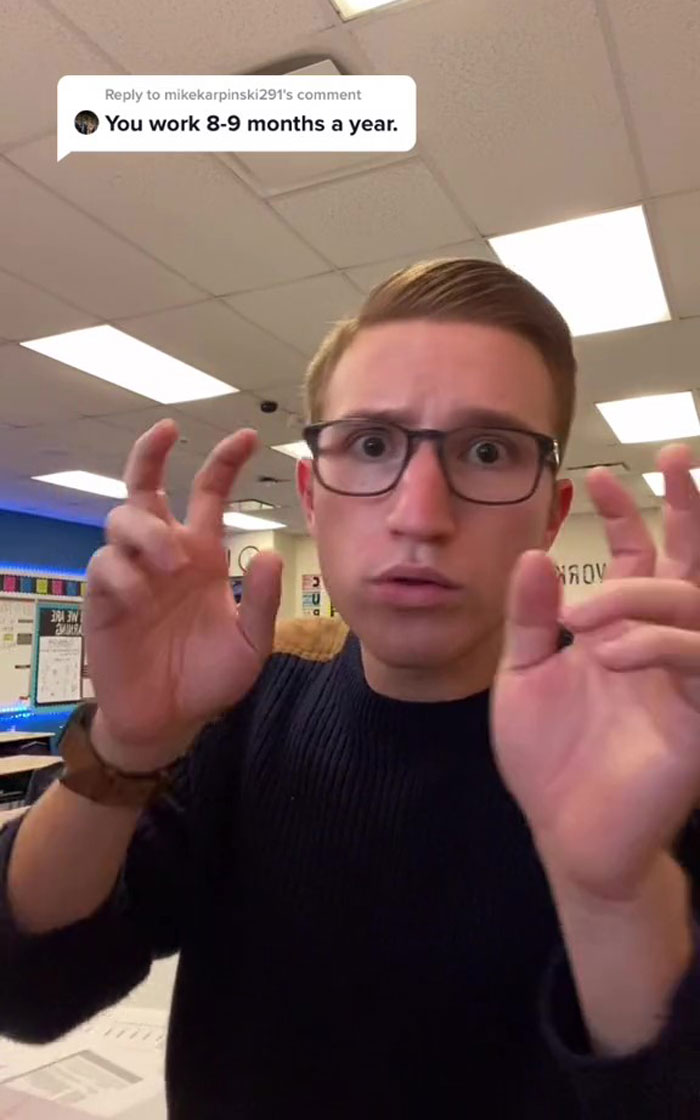 If you look through Mr. Cohen’s social media, you will see that he started posting not that long ago. The teacher started making content online in hopes to “start some real conversations. Our teachers (and students!) deserve the best and it is the unfortunate reality that we are far from making this dream a reality.”

The teacher explained that back in March of last year when everything shut down and students had to adapt to a new learning system, people finally started to realize what a big role a teacher plays in a student’s life. But now children are back in physical schools and the conversation has died out. Mr. Cohen aims to change that and chose social media to do it. 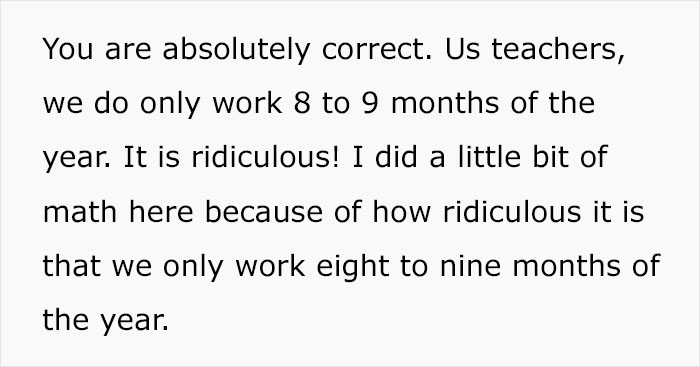 Seems like his efforts are bringing results as he was able to reach so many people with the TikTok video. Because so many people saw the video, a lot of them wanted to say their piece about it. Mr. Cohen wanted to address one of the comments, which was a person suggesting that the pay is fair because teachers don’t work all year round. It seems that the follow-up video was even more interesting to TikTok users than the first one, garnering 3.2M views.

So the teacher took out his calculator to put things into perspective. Firstly, his working hours are from 7 in the morning until 5 in the evening, which is 10 hours a day. So in a week, he works for 50 hours, and in a month, he works about 200 hours.

So Mr. Cohen made another video explaining that he actually works a lot and he calculated that he roughly spends 60 hours a week working

That’s not all. Mr. Cohen says that he often has to participate in a lot of events and go to meetings with families and similar activities. That adds another 10 hours in a week but the teacher thinks he’s being generous and is only calculating the minimum.

After adding up all the numbers, it turns out, this teacher works roughly 2,160 hours in those 9 months. Now for the moment of truth. When he divides his salary by the number of hours worked, we find out the hourly pay is just above $14.

Because teaching includes not only lessons but preparation for them, events and meetings that take place in the evenings 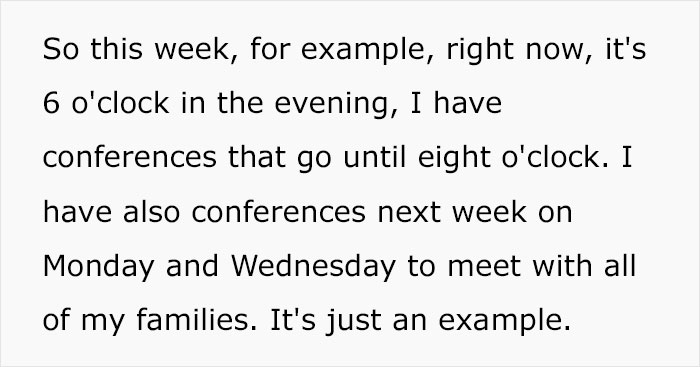 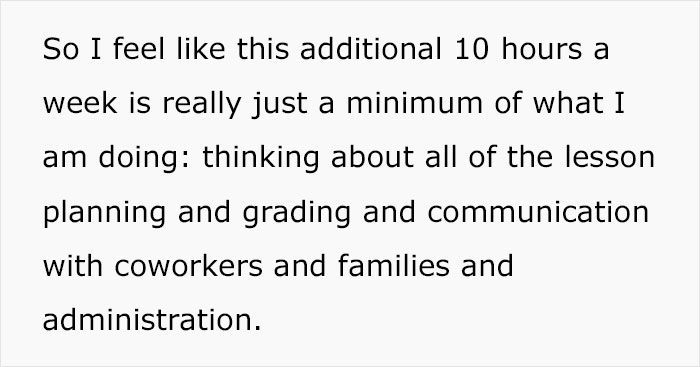 That means Mr. Cohen gets paid less than double the federal minimum wage, which is $8.80 per hour in Ohio where he is working. It is still significantly more than the minimum wage and the teacher doesn’t want to come across as ungrateful, but he still thinks that a conversation about teacher salaries must be louder.

Also, not all teachers earn the same amount. Understandably, teachers with more experience and those who have worked at a school for longer earn more, but there is actually a big difference in teachers’ paychecks from state to state.

So in the end, his salary isn’t looking that impressive at $14 an hour, even taking into account that he works about 9 months out of the 12

According to a report done to investigate what is the average salary of a teacher just beginning to work, it was $41,163. The NEA actually advocates for making the wage for starting teachers at least $40,000, but they acknowledge that there is still a lot of work to do and are aware of the fact that some teachers, like Kyle Cohen, are underpaid.

The teacher still loves his job and is grateful for it, but he still thinks that educators don’t get fair compensation for their work 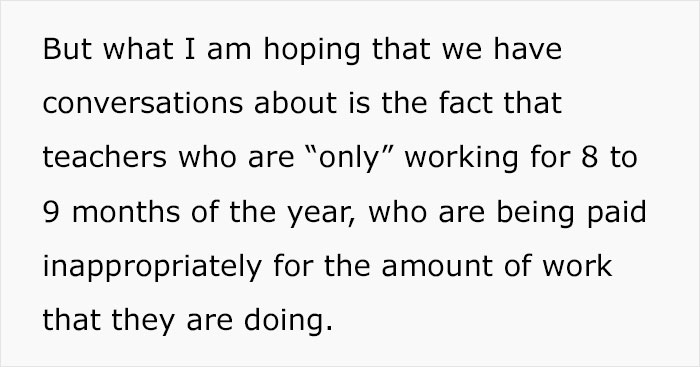 Not only the wages are different. Mr. Cohen points out that “It is the unfortunate reality that we live in a country where a student in one zip code could have a dramatically different educational experience from a student in a neighboring zip code.”

When asked what can be done to help the teachers that consequently improve the quality of education, Mr. Cohen says, “We need to address these inequities while simultaneously addressing the inappropriate pay teachers are earning. This change will not happen overnight, but it is absolutely vital in order to provide all students in this country with an education they deserve.”

Unfortunately, the teacher doesn’t feel that there is enough action taken to reach that goal. He says that it will take a lot of joint effort to make changes to a system that has been like that for years.

Mr. Cohen thinks that “This problem is so much larger than schools and teachers. We need to come together as a nation to reevaluate what public education looks like (and we need to invite teachers to the table to have these conversations!).”

Below you can watch the viral video for yourself

What do you think of this topic? Do you think that teachers get paid enough and their wages are fairly consistent with the amount they have to do? Or are you of the opinion that they should get more in return for their responsibilities? We would like to hear what is on your mind!

Share. Facebook Twitter Pinterest LinkedIn Tumblr WhatsApp Email
Previous Article“It Is So Disturbing”: Woman On TikTok Sheds Light On How The Bodies Of Fitness Models Can Be Altered Before Photoshoots
Next Article “Gifted Students, What Was It Like Growing Up As The Smart Kid? Has It Affected Your Adult Life In Any Way?” (50 Answers)