Pushing away the tide of ignorance is something teachers have been doing ever since the dawn of time, but it’s not exclusive to teachers—every one of us is more or less responsible for ensuring that said ignorance doesn’t lead to bad things happening to good people.

And this one woman has been doing just that, albeit not necessarily through education as much as it was a clever clap-back at people perpetrating anti-vaccinationism. Is that a word? You get the point! 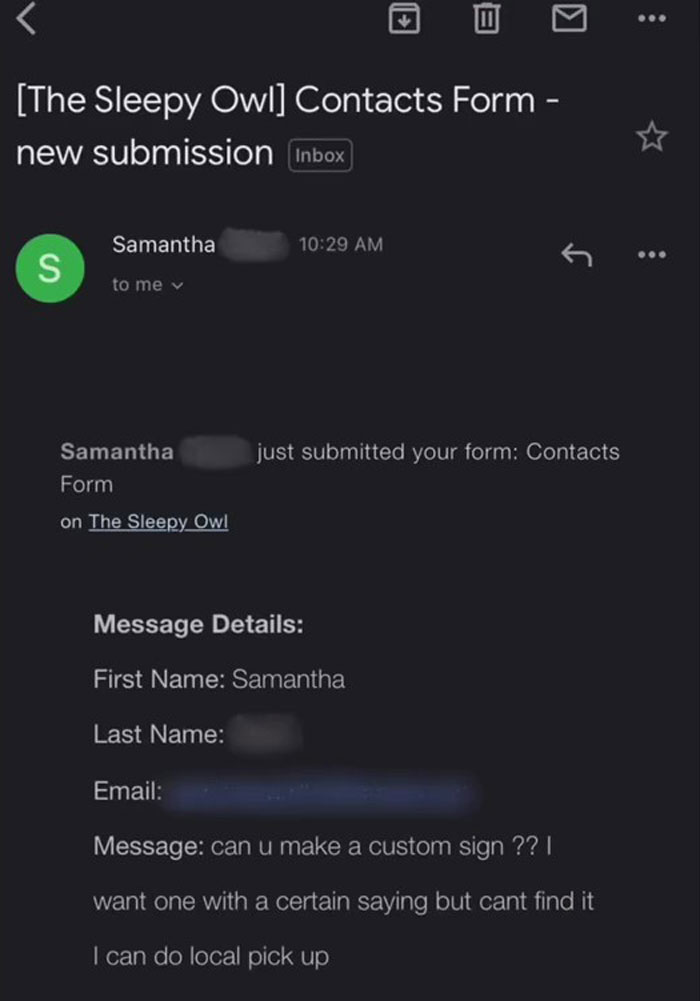 Meet Lexi, an arts and crafts guru from Knoxville, Tennessee who creates everything from pictures to doormats to witty signs. And quite recently she got a request from a client named Samantha to create a very particular custom sign.

In particular, it was supposed to be one of those round signs and it should have said “welcome unvacinated [sic!] and unafraid” using a “pretty” font to be hung on the customer’s front door by Thanksgiving.

Now, while there are surely people who would have just taken the order, performed it, and would’ve been on their way, Lexi was more conscious about serving such a client. After all, doing this would have meant supporting the anti-vax cause, and that’s something Lexi did not agree with.

Lexi Rhodes of the Sleepy Owl got a request for an anti-vax sign, and that’s something she does not agree with 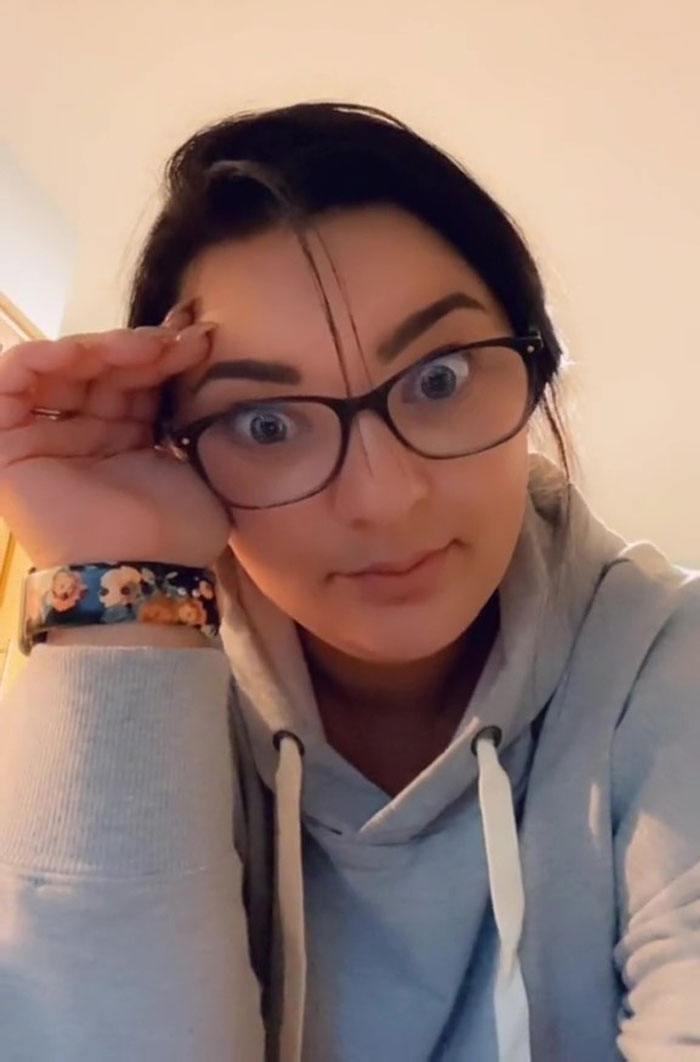 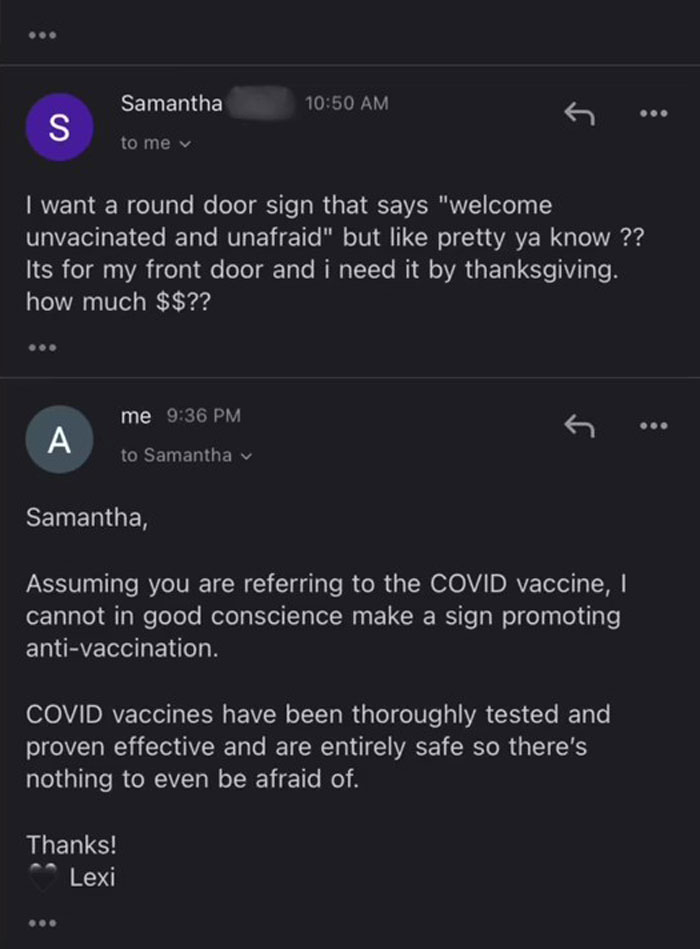 You’d think a polite ‘no’ would suffice, but nope, the client just turned hella rude 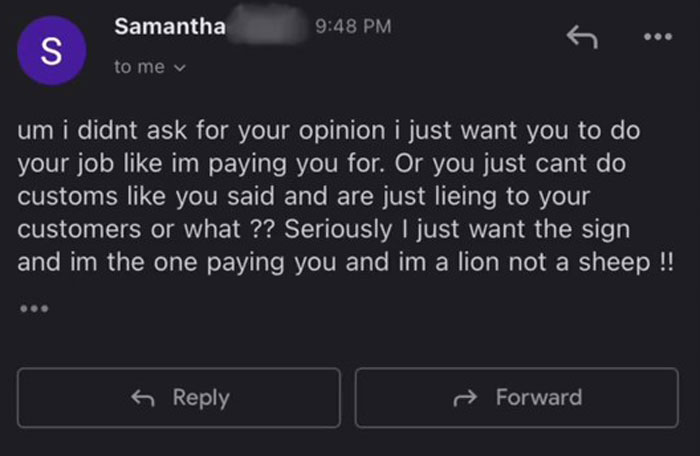 “My initial reaction to the potential client’s request was, quite literally, an eye roll,” elaborated Lexi in an interview with Bored Panda. “I immediately knew I would not make the requested sign, so my next thoughts were related to determining how to best proceed in denying her request. “

So, after Lexi politely responded, Samantha seemed to have turned somewhat hostile and said she didn’t ask for Lexi’s opinion—“i just want you to do your job like im paying you for” [sic!] For the record, she hadn’t paid yet, but that’s beside the point.

But Lexi was having none of it and she ‘maliciously complied’ by actually creating a round door sign that said what Samantha wanted it to say… and then some.

So, as a response, Lexi ‘maliciously complied’ to the request and added a little bit more to it 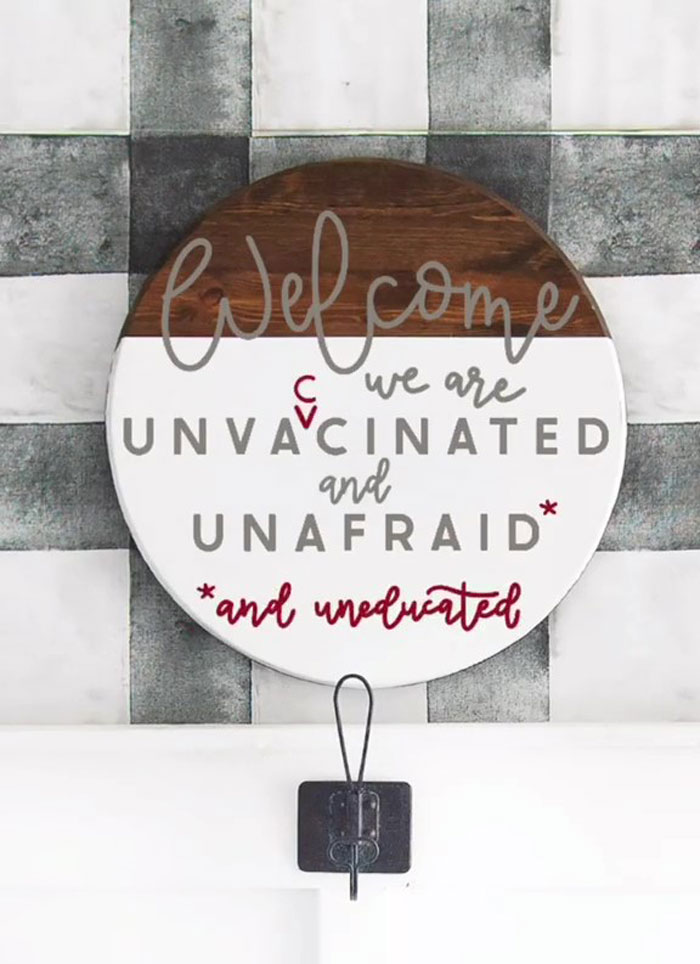 And yes, she replied to the client, as you can see in the screenshot 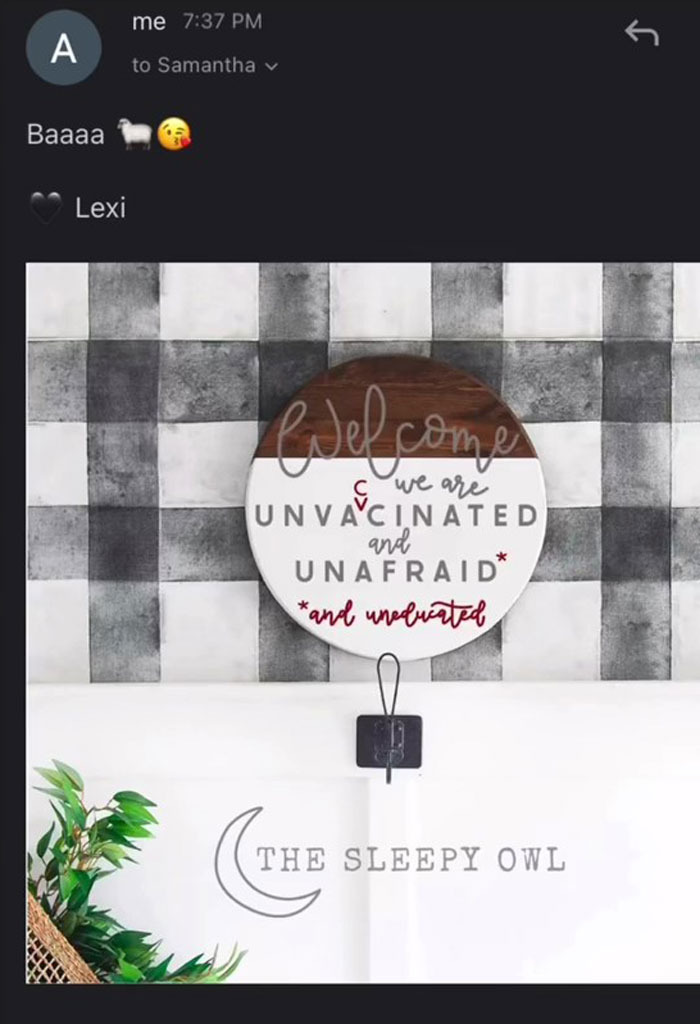 “I have been very vocal in regards to the hope that the COVID vaccines bring us to help end this global pandemic and my support of them. After all, I am a mother to a special-needs child (4 years old and not yet of age to be vaccinated) that relies on in-person services and I have personally experienced loss from this deadly virus, as not long before I received Samantha’s request, my grandmother died from COVID,” elaborated Lexi.

She continued: “I had been mostly silent within my business on my standpoint, but this request gave me the push I may have needed to make my stance known. I felt my initial response to her was direct and finite, so I was honestly surprised to hear back from her at all. Though this was the first request I had received to make a sign promoting anti-vaccination, this was not the first time that I have been treated poorly by a potential client. So, when she responded to my refusal in the manner in which she did, I felt I needed to be more clear in how I prefer to conduct business, which is simply making products that adhere to my ethical standards and working with clients that share a mutual respect for the process and everyone involved.”

You can check out the video here

@thesleepyowlhomeJust because I ✨can✨ make something doesn’t mean I will. #karen #customerservice #pettybetty #refusework #smallbusiness #maker #covid #vaccineswork #sheep #ba♬ Act 2: In the Hall of the Mountain King – Edvard Grieg

Overall, people online have been supportive of Lexi, despite there being some hate

So, the sign ended up saying “Welcome. We are unvac[c]inated and unafraid.” with a little asterisk at the end clarifying “and uneducated.” The design was soon slapped onto the reply message on GMail and sent to Samantha.

And, to add insult to injury, this move ended up very beneficial for Lexi’s crafts business as seen in this video where online shop purchases kept coming and coming.

“Overall, my decision to publicize the interaction on TikTok has been one of the best business decisions I have ever made,” elaborated Lexi. “Though I have received a fair amount of nasty and threatening messages and emails, I have received far more messages of support and I have so many new clients that have brought meaning into my work that I didn’t even know was missing.”

Unfortunately, the insults didn’t stop there as Lexi got a couple more letters, one from someone who’s unvaccinated, but educated, saying “your an idiot,” to which Lexi responded with “*you’re”, and another one here claiming the vaccine is not fully tested. We’ll just stop there. But these few drops of hate were nothing compared to the sea of support Lexi got from TikTok.

“I wasn’t very surprised at the amount of views the video generated [352k as of this article], as vaccination standpoints are often a trending topic on TikTok. I was, however, incredibly surprised by the response to the video, from both sides,” explained Lexi.

Needless to say, the business was booming afterwards and Lexi was greeted with an inbox full of requests after this little clap-back

“Most surprising was the amount of people that had taken time from their day to stop what they were doing to send me an email or message to express their support and share their stories and simply spread their kindness. In the beginning, it was quite overwhelming, as I had never received so many emails and orders at one time before. I struggled to prioritize and respond to everyone but, once I laid out a clear path forward, I’ve managed quite well and have enjoyed the new opportunities and learning experiences this has offered me.”

You can check out the video and read the comments here, and you can also check out Lexi’s store, where she has all of the ‘no to anti-vax’ designs on sale. But before you run off to the other side of the internet, tell us your thoughts on this in the comment section below!