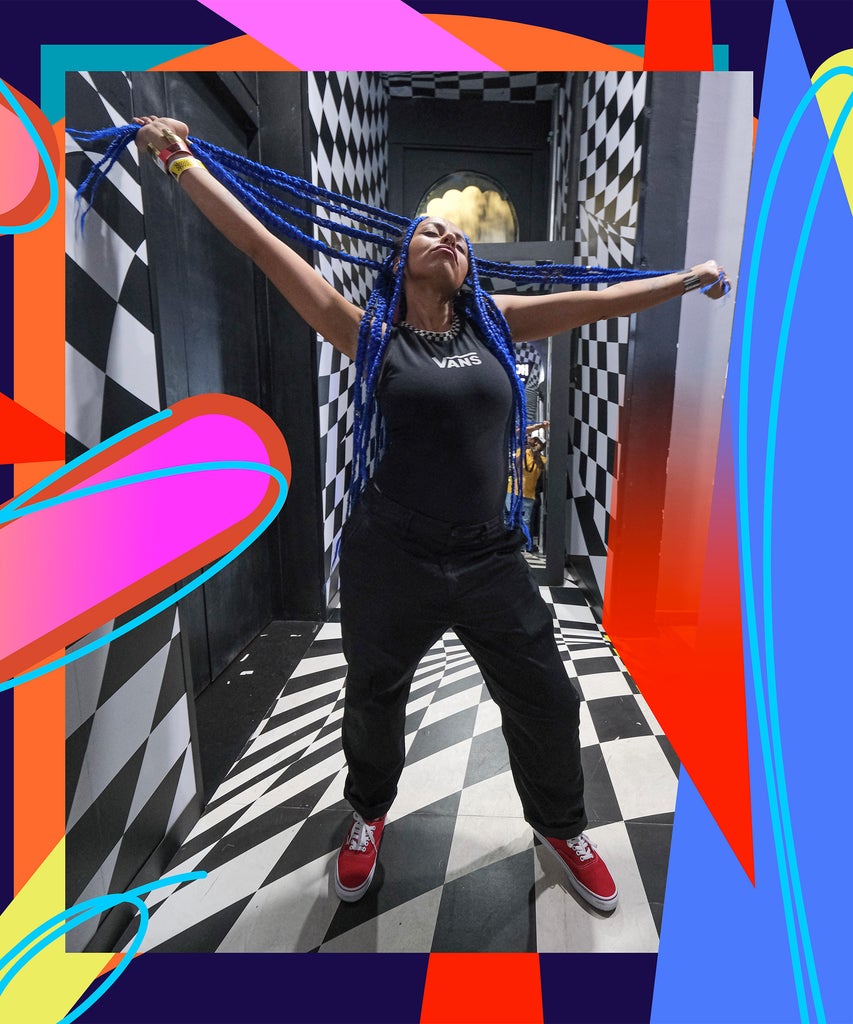 Growing up in São Paulo, Brazil, the largest city in the South American country and the fourth-biggest metropolis in the world, Joy Sales was influenced by a diverse set of cultures and spiritual practices all around her, at all times. Today, these sounds, styles, and traditions can be heard in the emerging singer-songwriter’s music.

Merging traditional hip-hop beats and R&B rifts with the sonic rituals of umbanda — a widely practiced Afro-Brazilian religion that blends African traditions with Roman Catholicism, Spiritism, and Indigenous tenets — Sales’ discography sounds like the streets of São Paulo and speaks to daily life in Sampa. In “Força de Dandara,” her single titled after the Black warrior in colonial Brazil of the same name — she depicts Black pride, strength, and liberation.

“When you grow up around a blend of cultures and religions, you can’t filter what you hear or feel,” the 33-year-old artist tells Refinery29 Somos over Zoom about the role that her global position has had on her sound.

In March, her homegrown strains reached international ears when Sales opened for Colombian-Canadian songstress Jessie Reyez at Mexico City’s recently-opened House of Vans venue. While the Afro-Brasileira contest winner of Vans’ “Share the Stage” competition performs in Portuguese, she says the feeling that her music elicits needs no translation. “I create to heal myself and others. I tap into all of this energy inside me: the softness, anger, feminism, and femininity. Through my music, I find healing, and I want to be able to transmit that energy to my listeners sonically,” Sales adds.

But making it as a Black queer singer in Brazil isn’t without its challenges. As Sales continues to develop as an artist, she experiences the same racial and socioeconomic disadvantages that many young Black creatives face in a blatantly Eurocentric society and music industry. “Here, unless you come from an advantaged socioeconomic background, artists have to work two jobs to survive,” she says candidly. “Music is created for love, not income. Black artists, especially, always have to wait for their turn.”

This has been true for Sales’ favorite performers, Juçara Marçal, who, like Sales, bridges Afro-Brazilian folk sounds with more popular music genres like hip-hop, rock, and electronic, as well as the late samba singer Clementina de Jesus. “Juçara and Clementina inspire me beyond their artistry because of their social and political influence. They are national figures of Afro-Brazilian culture.” But despite their importance to Brazilian music, culture, and history, both artists often worked side (and full-time) jobs throughout their careers in order to survive. Marça, for instance, started her music career in 1990, but she didn’t retire from teaching until 2015. Meanwhile, de Jesus worked for decades as a maid before being discovered at the age of 62.

This problem isn’t exclusive to music artists, either. The 2002 cult favorite “City of God,” which depicts the lives of kids growing up in the favelas of Rio de Janeiro, is one of the most globally renowned films in the history of Brazilian cinema. However, 20 years after the film picked up international awards and recognition, the majority of its primarily Black cast continues to live in the same low-income communities that they did while filming. In 2015, a documentary titled “City of God – 10 Years Later” gained widespread attention for revealing the current living conditions of the actors in the film. “The narrator and protagonist in ‘City of God’ drives for Uber, while some of his white cast-mates went on to become Hollywood stars,” Sales says. “When Afro-Brazilians are given the same opportunities as their white colleagues, the outcomes are different. The music industry, and mainstream media, doesn’t prioritize or appreciate Black talent in the same way,” she says.

Knowing how difficult it is for young Black talent to make lasting and profitable waves in her home country, it’s hard for Salas to not feel discouraged. But as an international audience swayed to her original music in Mexico City, she says her motivation has been restored. Leaving Mexico, Salas is inspired by the connections she made and feels energized to continue growing her platform with newfound support. “As a 33-year-old Black woman from the suburbs of Brazil, this opportunity felt like my final one,” she says. “But it brought me a new perspective. I was able to perform for my biggest crowd yet, while sharing my truth.”

For Sales, winning the Vans contest was only the beginning. Next, she wants to collaborate with the artist who helped make it happen. “Seeing Jessie Reyez perform was love at first sight,” she says. For organizers, Sales’ presence at the show, and the life-altering encouragement she received onstage, was a reminder of the power of visibility for young Black creatives.