Pre-Silicon Valley – This is True 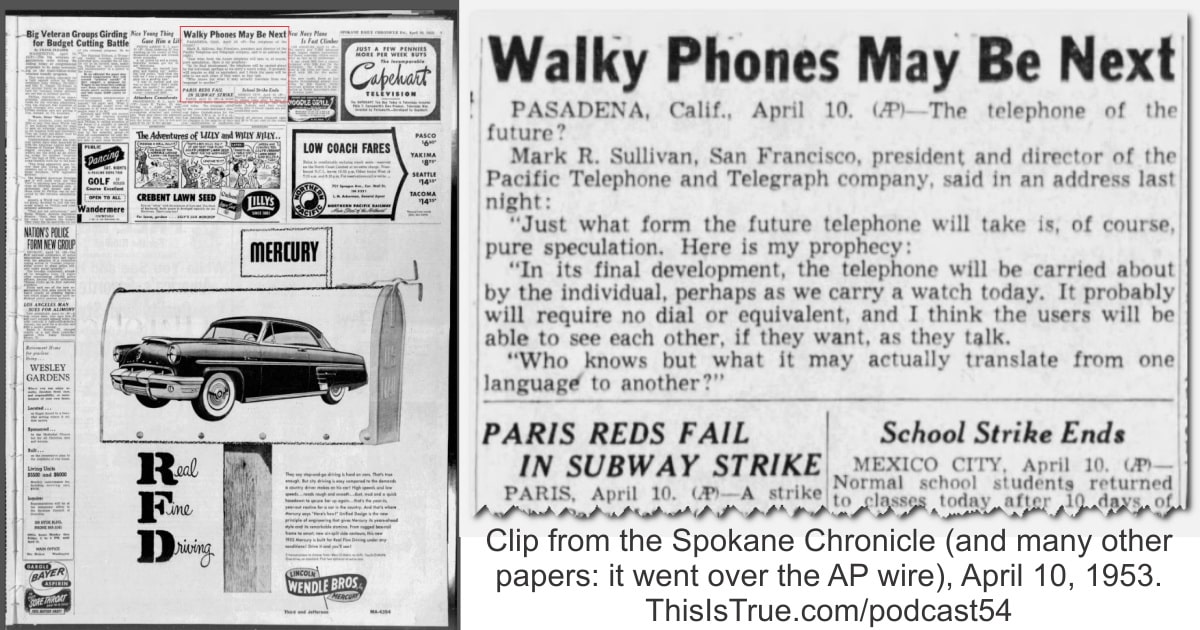 
In This Episode: A news story going around on social media sounds too amazing to be true. So I’m going to dig into the idea that the smartphone was invented in 1953. The back story is even more impressive: it nicely demonstrates that you don’t need a college education to have Uncommon Sense.

There’s a ridiculously short article going around on social media that seems to say that the smartphone, with drop-dead astounding capabilities for the year 1953, was first described at that time by a telephone company executive.

On my birthday (but before I was born!), April 10, 1953, the Associated Press sent a remarkably brief and remarkably astounding article to its member newspapers. The Spokane, Washington, Chronicle was one of many newspapers that ran it, and I have a clip from that paper from an online newspaper archive. There are examples of the same identical article from other newspapers too, so we can be very confident that this isn’t some sort of hoax.

Typically in those days, the newspaper’s copy editor would write the headline, and in the Chronicle, the headline was, “Walky Phones May Be Next” — which probably conjured up the image of a telephone walking around.

That’s not exactly what the editor meant: in the early 1940s, a new kind of two-way radio had come out, which the U.S. military used in World War II. It was small enough to hold in your hand, and the soldiers dubbed it the “walkie talkie”.

The article, in which the Associated Press wondered might describe “the telephone of the future,” quotes Mark R. Sullivan of San Francisco, California. He was the president of Pacific Telephone at the time. The article says he gave a speech the night before — but didn’t say where, other than Pasadena, near Los Angeles, or who he was speaking to — and quoted several sentences from his talk. And I’ll read Sullivan’s remarks verbatim:

Just what form the future telephone will take is, of course, pure speculation. Here is my prophesy:

In its final development, the telephone will be carried about by the individual, perhaps as we carry a watch today. It probably will require no dial or equivalent, and I think the users will be able to see each other, if they want, as they talk.

Who knows but what it may actually translate from one language to another?”

Sullivan was born in 1896, and before being the president of Ma Bell’s west coast operating company, he was a vice president at the mothership: the American Telephone and Telegraph Company, or AT&T, in New York, holding that position from 1942 to 1945. Then he was promoted to be the president of The Chesapeake and Potomac Telephone Companies, based in Washington, D.C., from 1945 to 1947. And in 1947 he took over the operation of the Pacific Telephone and Telegraph Company.

The social media crowd has been wowed — and no doubt many of them read the 66-year-old article …on their smartphones. But at least some of them were also skeptical: both Snopes and Truth of Fiction dot com checked it out, and declared it true.

In April 1953, Mark R. Sullivan was in his prime at 57 years old. I have a photo of him on the Show Page, which is from an AT&T advertisement in the Columbia Daily Spectator from January 14, 1947. The ad boasts that the 17 operating company presidents shown “started at the bottom,” and noted Sullivan started as a (and they put this in italics) a clerk, and when he was first hired by the company in 1912, he made $50 a month.

Here’s the point of the ad: “One of the traditions” of the telephone company, it said, “is that its executives come up from the ranks.” And, it says, “The Bell System aims to keep the opportunity for advancement open to all.” Though to be sure… “all” in this case means white men.

According to the directory “Eminent Californians 1953”, published in Palo Alto, which is at the southern end of the San Francisco peninsula, Mr. Sullivan “received his education in the public schools of San Francisco,” and doesn’t mention any college.

So there’s his unremarkable background: he started at the phone company as a clerk when he was 16 years old, so he may not have even finished high school. Yet he moved his way up from clerk to inspector to manager to vice president and general manager to first vice president to vice president of AT&T to president of two AT&T operating companies. You might say he grew up at the phone company. And clearly, he paid attention to his job and the learning opportunities there. He didn’t need a college education to be successful, or to practice Uncommon Sense.

OK, so I mentioned the walkie talkie. Here’s something else that was part of the culture of that era: the Dick Tracy newspaper comic strip. Featuring tough and smart police detective Dick Tracy, the strip debuted in 1931 and, importantly, in 1946 Dick Tracy got a new tool to help him in his job: “the 2-Way Wrist Radio”, which became an iconic part of the strip, carefully called out many times by artist Chester Gould until …it turned into “the 2-Way Wrist TV” in 1964.

So it’s clear that the real technology of the day, and the popular (if you will) memes of the day, encouraged people to think outside the box. Sullivan, with his 41 years of experience with the telephone company at that point, wasn’t afraid to use his Uncommon Sense to foresee a pretty large chunk of what makes a smartphone a smartphone — and he did it in public with a reporter in the room:

And wouldn’t you know it, he worked in what’s now known as the seat of technological advancement, the Silicon Valley.

But little did he know that AT&T wouldn’t lead the way to the telephone he envisioned.

One of the other newspapers that ran the short news story was the Tacoma, Washington, News Tribune. That paper’s copy editor wrote a different headline on the story, and he also had some prophecy in his thinking. The headline is, “There’ll Be No Escape in [the] Future From Telephones” — and ain’t that the truth?!

If Sullivan was inspired by Chester Gould’s technology ideas, he wasn’t the only one. Engineer Martin Cooper was the inventor of the handheld cell phone in 1973, just 20 years after Sullivan made his “prophecy.” Cooper said he got his inspiration not from the Star Trek communicator, but from Dick Tracy’s Two-Way Wrist Radio.

The one thing I think Sullivan got wrong was in his introduction: “In its final development, the telephone will be….” If there’s one thing we should have learned in the past 66 years of technology development, is it keeps evolving: we’re nowhere near the telephone’s “final development” even today. Yet by applying Uncommon Sense to the problems of the day, technology can evolve in an imaginative leap, even if sometimes it takes awhile for reality to catch up with our creativity.

But of course, Sullivan was certainly not the only visionary from the past. Take this quote, for instance:

When wireless is perfectly applied the whole earth will be converted into a huge brain, which in fact it is, all things being particles of a real and rhythmic whole. We shall be able to communicate with one another instantly, irrespective of distance. Not only this, but through television and telephony we shall see and hear one another as perfectly as though we were face to face, despite intervening distances of thousands of miles; and the instruments through which we shall be able to do his will be amazingly simple compared with our present telephone. A man will be able to carry one in his vest pocket.

That is from an interview with Nikola Tesla for Collier’s magazine in January 1926, and seems to not just describe the smartphone, but the network behind it: the Internet. The name of the article is perhaps an idea for a future episode: “When Woman is Boss”.

Uncommon Sense? The needle is pegged! I have a feeling I’ll be talking more about Tesla in a future episode. How’s that for prophecy?

For photos, links to the newspaper clippings, and a place to comment, the Show Page for this episode is thisistrue.com/podcast54. And please remember to help keep the podcast going: contributions are why there are no commercials interrupting the episodes — and no ads on the web site. We need you to help too: there’s info on the Show Page.