Dear Landlord: I Cannot Be Held Responsible for the Coyote-Shaped Hole in the Wall 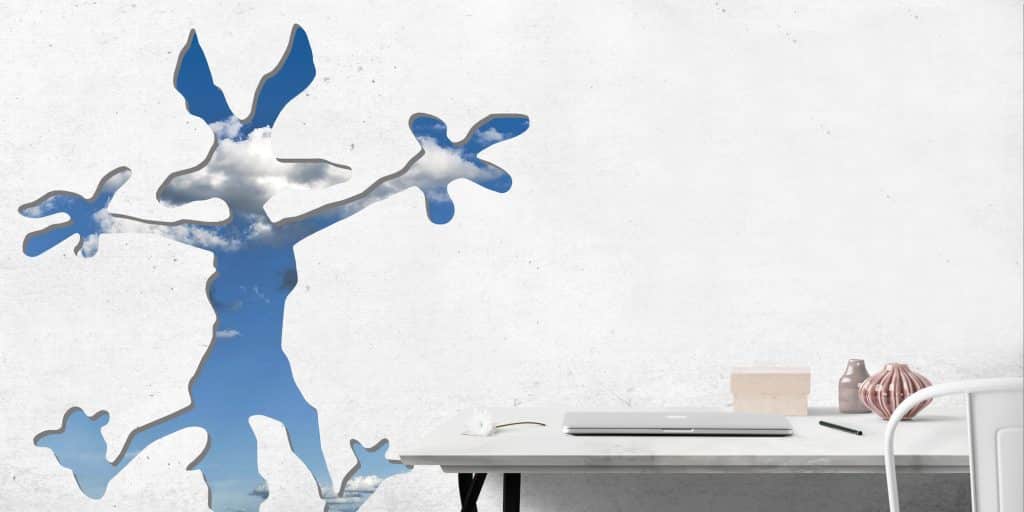 I am responding to the notice you slipped under the door of my apartment (3-B) yesterday morning detailing amounts owed for damages and repairs, this following your unannounced visit to my premises the previous afternoon.

As I explained then, the coyote-shaped hole in the wall is not my fault. It was caused by an erratic and impulsive predator (carnivorius twodimensium) that has been persistently entering my apartment thanks to lax building security as well as a seeming ability to punch in alarm codes and turn doorknobs.

In this instance, the coyote was blasted through said wall following a violent explosion of his own devising, a subject I will return to presently. Note that, though it is of significant size and indeed coyote-shaped, it is a clean hole with no otherwise structural damage and should not be difficult to repair, though again I must insist I am not responsible.

Yes, I own a roadrunner (apartmentpeticus imbecilicius), but when I signed the lease, I specifically asked you if I could keep a bird, and you assured me that this would be acceptable as long as it was clean and quiet. Except for the occasional, care-free “beep-beep” and a whooshing sound as it races fleet-footed from room to room, I believe my roadrunner has been an ideal pet.

Perhaps I should be seeking reparations from you, for at no time prior to signing the lease did you lead me to understand that I would be beset by an overly tenacious coyote with an insatiable lust for bird flesh and surprisingly refined engineering skills.

Which leads me to your second item: I have not, as you claim, extended the balcony and transformed it into an entirely new room. Despite the fact that you were somehow able to walk into this “room” during your surprise inspection, I assure you it was merely a drawing of a room placed at the edge of the balcony by the devious coyote, a fact I discovered following your departure when I too attempted to enter the space, only to burst through the canvas. There was a second when I was suspended midair that I must say was thrilling, though the feeling was fleeting as I plummeted three floors to the parking lot below, terrifying Mrs. Bernbaum and her Bichon Frise. Luckily I was not seriously harmed by the fall nor by the impact of the subsequent anvil, the provenance of which remains a mystery.

Returning to the subject of explosions, you unfortunately did not escape unscathed from the apartment after you casually approached my upright piano and began picking out the tune of “Believe Me If All Those Endearing Young Charms,” only, upon striking treble C, to be blown to what must be described as “smithereenies.” I assure you I had no idea the piano was loaded. I have been playing that song regularly without mishap. Or perhaps I was playing it wrong.

Again, I am sure it is that cunning coyote who is to blame for this destruction of property and injury to your person. But, as you are undoubtedly now aware, the damage is temporary, and your scorched face has returned to its usual shade of puce and piano keys no longer dangle melodiously from your mouth.

I am sorry you stepped in the quick-drying cement by the front door on your way to the hospital. I had no idea it was there. Again: coyote. I was able to recover your shoes and will return them to you at your convenience.

Also: the giant slingshot at the entrance to the bedroom is not mine.

I recognize that the noise of gunshots, explosions, rocket sleds, speeding trains, firecrackers, tornadoes, and jet-propelled pogo sticks is disturbing to the neighbors, but this coyote is relentless and clearly has endless financial resources. Regarding this, I have asked Gus at the front desk not to sign for any more packages addressed to a Mr. Coyote.

Throughout all this mayhem, my roadrunner has miraculously remained placidly unmolested. While I cannot be held responsible for damage caused to the apartment by a deranged predator and his Rube Goldberg-esque contraptions, I am, however, willing to do my part. I will be attempting to capture the coyote myself by installing an Acme brand Varmint-Catch’M 3000.

What could possibly go wrong?