Mama & Me: An Ode To The Grandmother Who Loved Me When My Mother Couldn’t 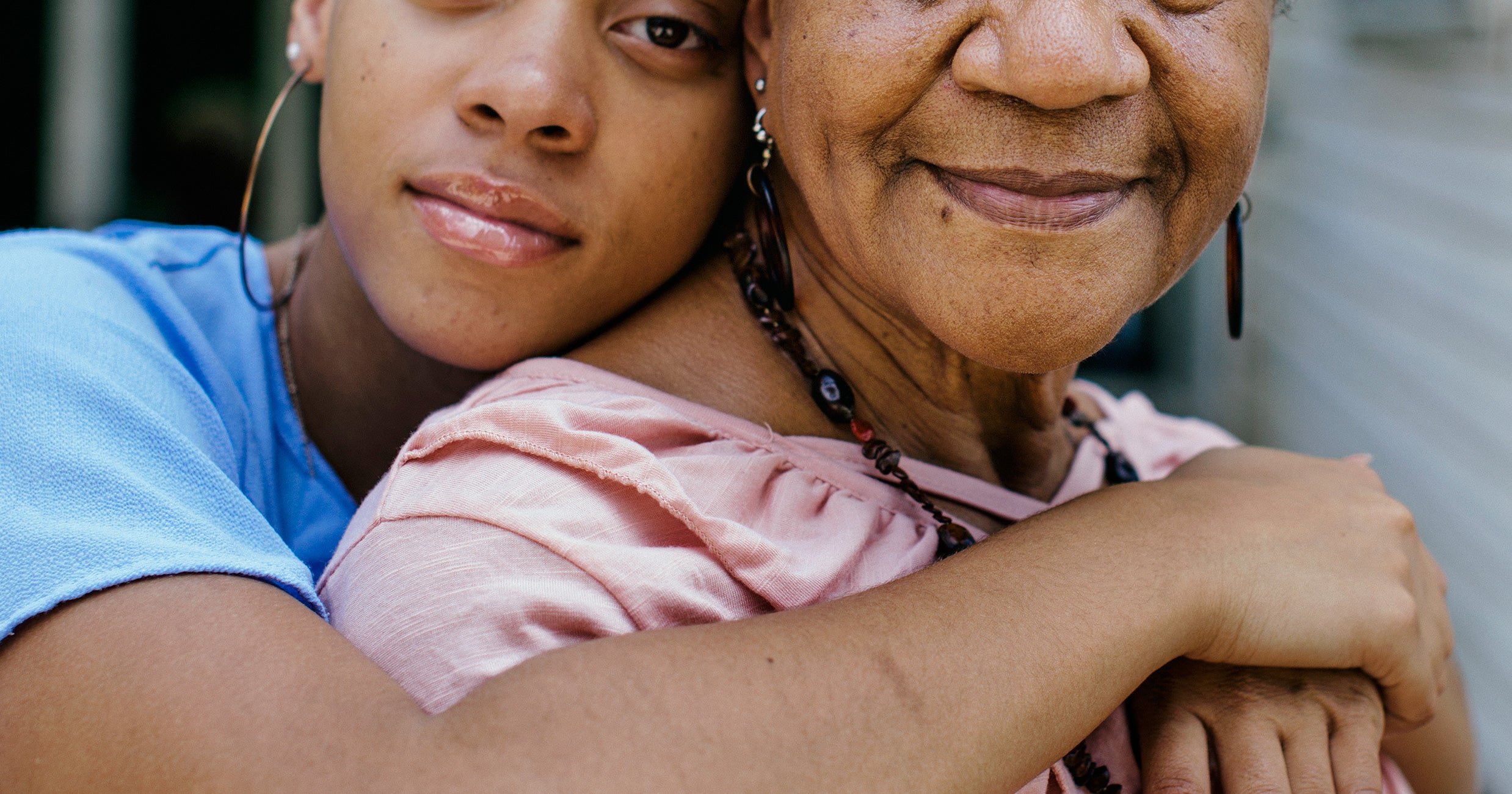 I’ve spent my entire life yearning for love. In cocktail conversations and other interactions in which I’m trying to be charming, I like to blame this quality on being a Libra. If you believe in horoscopes, like I do, you’ll know that people born under the sign of the scales are known for being romantics. But deep down I know that the roots of my longing for love are probably more pedestrian: I was born of a single mother and a wayward Jamaican father.

He lived in the United Kingdom and worked there as a teacher for most of my life, only occasionally visiting Jamaica — where I lived until I moved to the U.S. at 22 years old — and rarely visiting me. His parenting mostly took the form of him periodically gifting me books, like my first boxset of The Chronicles of Narnia and an early edition of Harry Potter and the Philosopher’s Stone he gave me when I visited him one summer in London. I was nine then, and it’s still the most time I ever spent with my father in my life. My best guess is that both he and my mother passed their ennui genetically on to me, since he died of alcoholism when I was 19 and my childhood was marked by her depression. My first feeling of being loved came from my grandmother, who sheltered and cared for me after my mother ran me out of her house.

I see my mother most often in memories where she is irritated with me for being excessively sentimental. Two memories stand out: In the first, I’m around the age of 14 and struggling to get used to having a period, far removed from the days I read Are You There God? It’s Me, Margaret and empathized deeply with the protagonist’s desire for that aspect of her womanhood (it didn’t take me long to realize that menstrual cramps, like most so-called markers of ‘womanhood’, really suck). I visited my mother at the office where she worked off Nelson Mandela Highway, a wide road in Jamaica where the country’s old and present day capital cities Spanish Town and Kingston begin to meet. My belly was aching with painful cramps which felt like angry fists pummeling me on the inside. My mother met me in the building’s restroom and I started crying when I saw her, instinctively seeking sympathy. I remember reaching out for a hug and her shrugging me off.

The second memory is a little more blurry. I’m around 12 or 13 and I’m sitting at a desktop computer. It was the early 2000s, and that computer was like my own magical closet door to a world which I quickly became obsessed with: the internet. I remember that my mother walked by and noticed a scrap of paper lying next to me on which I’d scribbled the beginnings of a poem or song imbued with my characteristic sentimentality. My amateurish words on that paper really pissed my mother off.

“That’s all you can think about!” she spat derisively, “Love.”

I’m in the kitchen of my fourth floor walk up apartment on a cold Chicago night frying slices of sweet ripe plantain in hot oil, when the smell suddenly transports me. It’s no longer the year 2022 and I’m no longer knocking on 32. I’m 18 years old and I live in Jamaica with my grandmother — or “Mama” as I call her. More specifically, I live with Mama in a ghetto known as Six, a ramshackle community made up of a looped lane lined with the corrugated zinc fences and ply board houses that typify Jamaican slums. I’m a student at the University of the West Indies, a campus that’s miles of morning traffic away from where we live in Spanish Town. As the dawn rises, I prepare for my long commute — and so does Mama to make me breakfast. My cell phone’s alarm is beaten to the task of breaking my sleep by the sound of Mama’s ancient stereo. At around 5 a.m. each morning, she’ll switch it on with the dial solidly tuned to radio frequency 94FM. The station belongs to a media company where I will go on to work after graduating with a degree in journalism.

But I don’t know that yet, and Mama’s old stereo reliably creaks on with traffic announcements and banter by DJs in between repetitions of the station’s slogan — real Jamaican radio — as my grandmother’s voice carries a tune of praise. Mornings always find Mama cooking breakfast for me in her humble kitchen while also singing words of thanksgiving. Sometimes she warbles a recognizable gospel standard, but most often just a song of her own making.

When I was born to my then-teenage mother, Mama’s house was a one-room board shack and the kitchen didn’t exist. But though my mother made it her life’s goal to move beyond it, my grandmother never abandoned the home she made on the margins. Over the years she’s added concrete walls and roofs and eventually built a modest verandah she now relaxes on and listens to radio in the evenings.

I’ve always admired Mama’s ambitious and enterprising spirit, but back then I was especially grateful for it. Shortly before I was due to graduate from high school, my mother drove through the potholes and gutters that pepper Six and stopped in front of her mother’s front gate to unload a bag of my clothes and a dusty twin mattress on the curb, leaving it all — and me — behind.

The night before that unceremonious goodbye my mother had come from work, pulled into the driveway of the nicely situated home in a working class community where I lived with her and my little sister, saw the light of the TV extinguish as I hurriedly turned it off and went to my room to avoid a berating from her for having it on in the first place, and confronted me with an outpouring of rage that ended with her promising to kill me. I have given up trying to understand the logic of a mind that would seek to destroy their own offspring with that degree of loathing, but I remember that the child and adult inside of me that night was scared shitless of the possibility that she would deliver on her promise. So I left her house and ran to Mama’s.

Mama’s house is where I found sanctuary.

The kitchen in this house doesn’t have nice flooring like the one I ran from in the night, but it boasts a linoleum floor that Mama keeps clean as if it were the finest of tiles. The white fridge is one I’ve known since the summers of childhood I spent with my cousins gorging on the sweet-juicy-sticky mangoes from Mama’s trees, and it’s still dotted with decorative plastic fruit magnets. A window with red-painted wooden shutters looks out to the chicken coop Mama built a couple years back so she could raise hens and sell their eggs for a little income. Mama’s meals are my favorite part of the day. She makes dinner nightly too: dishes like sumptuous stewed chicken and rice and peas with coconut milk made from scratch, but those are shared with others in the yard (another aunt and her daughter, who live in a house steps from my grandmother’s kitchen door).

Breakfast is just for me.

Mama makes me fried dumplings; pillowy, golden balls of dough that pair perfectly with what she calls sweet-ting, an old-school Jamaican catch-all name for non-carb mains. Mama makes me breakfast sweet-ting like salted codfish cooked down with saucy plum tomatoes, green scallions, onions, and thyme, or a simple fried egg with some pinkish pork franks on the side, the former flecked with black pepper and the latter perfectly salty. Sometimes it’s cornmeal porridge laced with creamy condensed milk and gratings of fresh nutmeg — food that builds my body while also bolstering my learning mind.

My body was sustained by Mama’s phenomenal cooking, no question about it, and though I eventually graduated from university with first class honors, the highest they give, what those meals fed me was even more crucial to my development than having strong bones and a brain ready to learn.

When my first televised story premiered on Jamaica’s nationally broadcast primetime news, my perky face perched atop a microphone and my name in big letters on the brightly colored chyron, I came home to Mama’s house to a feast that left me bewildered. I don’t remember all the different dishes present, but I remember not understanding why they were all for me.

But then there was Mama’s smiling face with cheeks like mine, her dark skin and bright eyes,  her palms so familiar with work handing me a covered dinner plate and saying — the saying itself still necessary for me back then, the me who was so starved of the idea that I was worthy of anything — that she was proud of me.

Afrofuturist artist and thinker Rasheedah Phillips writes about the concept of Black womanist temporalities, essentially the idea that “what produces a feeling of home, rootedness, and protection is grounded in the experiences of our grandmothers and great grandmothers.” Though it sounds like science fiction, it’s a very real recognition of what those in the African diaspora have long known and felt in our bones: that the love and protection of a Black grandmother transcends boundaries of space and time.

Today I’m years and miles removed from that time and space in Jamaica, yet it’s Mama’s love I feel most strongly. It’s her maternal love that still sustains me.