We Do Not Sit Young Families Under Hulk’s Penis 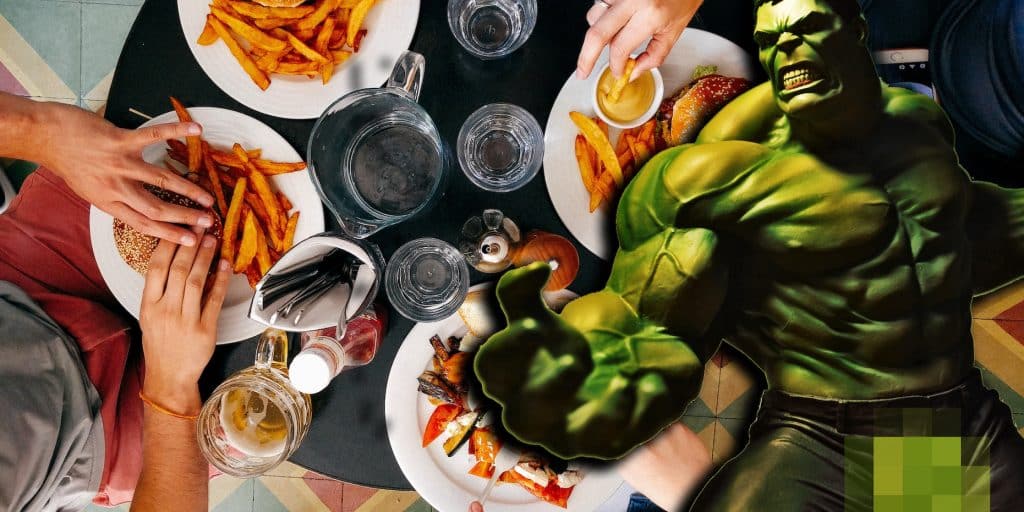 Once more, welcome to the team Andy!

You had a great first week but there were a few things Chad wanted me to put in writing so we can avoid any more misunderstandings on the floor.

Firstly, Hollywood World is not affiliated to Planet Hollywood. We just both happen to be restaurants. I guess some people might suggest that there is a slight overlap of themes but that’s about it. We actually have more in common with Chicken Hut or Cheesecake Warehouse if you want to really analyze it, so if anyone mentions Planet Hollywood you can just point that out. Since customer interaction is one of our special features you could even make a joke of it. Try saying, “Planet What?” or “Hey, it sounds like we should sue them!”

Now, about out exhibits. Our collection of treasures is second to none in the state. But it does require some knowledge and understanding of a few sensitive issues when seating guests in certain areas.

Even if the guests arrive in full Avengers outfits. Even if the seated party has kids dressed as the Hulk. In fact, especially if they have kids dressed as the Hulk. Young children do not have the capacity to contemplate the actuality of the Hulk’s monstrous penis and seeing angry and distressed parents trying to explain the giant veiny member that encompasses their entire vision for a whole meal is unpleasant for everyone.

Some things just can’t be fixed with free waffle fries.

The “reserved sign” placed on the table is also there to help you think, “should I sit these people here?” If there is a child in the party, then the answer is always NO.

In the meantime, there are six prime tables near the Batman wall for families and superhero fans. Adam West was the original and many would say, the best Batman. He was an avid collector of clay pipes from the Civil War era. As he was the original Batman, then it is absolutely not a stretch to say that they are Batman’s actual antique clay pipes. There are twenty-three of them scattered amongst the signed photos and ephemera. It’s a treasure hunt! Kids come in all hopped up on Spiderchap and Luke Jedi and what not and they leave knowing a lot about tobacco discoloration in Yankee pipe fragments from the Boston Kiln Factory. It’s a solid gold win-win.

If you can only find twenty-two, keep looking. Ok, here’s a hint, what’s that peeping out of Alfred’s tartan slippers?

There is one more seating issue you should be aware of. You should never sit anyone you think may be Jewish near all the stuff from the Indiana Jones films. People are very sensitive these days and this collection is prone to being misconstrued. There are replica whips up there. There is Sean Connery’s umbrella. There is even a fake cup of Christ. Yet all some people are able to focus on are all the swastikas. Go figure!

If in doubt about a group, we have Barbara Streisand’s bras in the corner along with Peter Dinklage’s codpiece from Game of Thrones. Popular pieces, super kosher.

This is a great place to work and a lot of it comes from our unique philosophy for customer interactions. People come and expect to be teased a little by you. You get to come to work and enjoy the rare license to exhibit a little spunk and moxie in your daily grind. This extends to “pretending” to be a little grumpy and put out by the labor of serving them. It’s a brilliant comic inversion of traditional service industry norms and values.

We have many high-value regulars who enjoy bringing new guests here to see the look on their faces when we throw the plastic straws on the table and ask them to “hurry up and order.” It’s light banter, it’s “pretend.”

“Don’t eat the napkins you fat cocksucker,” is not the tone we are going for. While you did say it with a big smile, I think, in this instance, you crossed the line into an actual insult.

Also, when you offered to bring the woman in the pink dress a bucket to eat from you did get some good laughs from the table. This was noted by Chad. However, repeating the joke three more times as you delivered drinks and food was taking it too far.

Finally trying to deliver their check in Odo’s Bucket, one of our most treasured exhibits, was totally, how should I say it… “beyond the pail.”

Get it? Yes, I too, a senior manager, am also allowed to joke around a bit!

But seriously, if you really had delivered the check in Odo’s Bucket you would have been fired. The exhibits are treasures and not props. It’s lucky you froze mid-floor in a fit of giggles and that it was only Chad that heard you say over and over through tears of laughter, “Because she really looks like a fucking pig.”

We know that marijuana is legal now and while we don’t condone its use by team members we are cool if you want to get a mild buzz on now and again. But you still have to be functional and productive on the floor. You still have to earn that $3.25 an hour. We want laughter. We don’t want a team member incapacitated by stoned hilarity which looks like you’re in the midst of a mental breakdown.

There are some things that not even a free Cherries Jubilee can fix.

Please take these friendly words as caring advice. We really do want you to grow and shine with us at Hollywood World.

This is also a written warning that has been sent to H.R.