Out of Thin Air – This is True 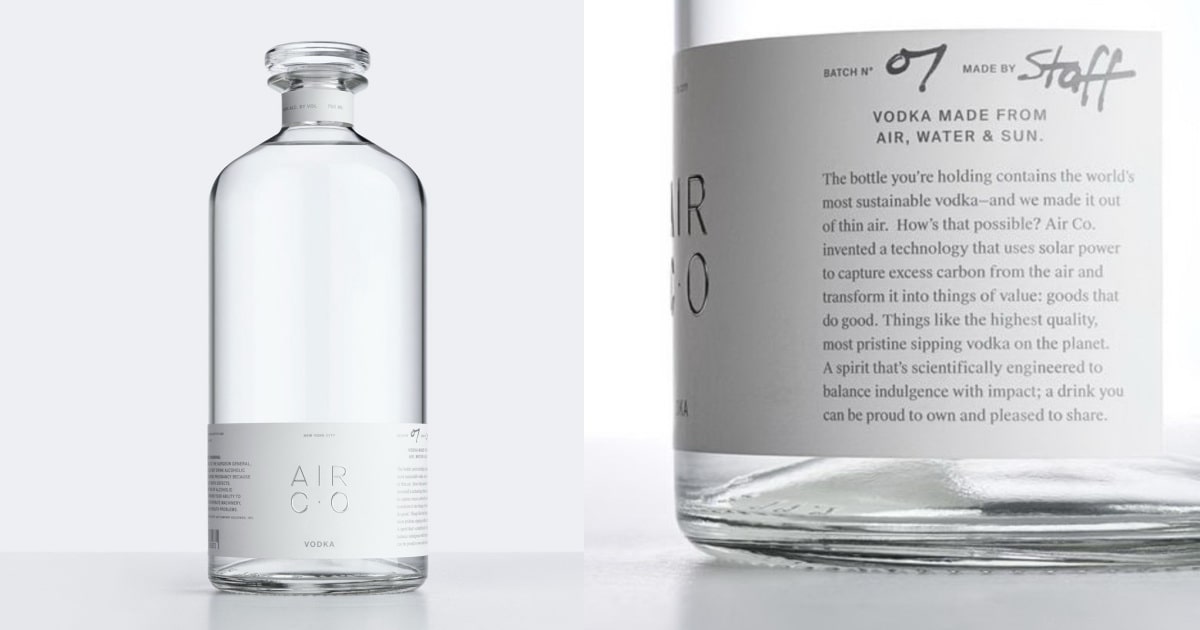 
In This Episode: Now here’s a fun example of Uncommon Sense in action — in the adult beverage category…?! You could call it another concept for “neutral spirits,” and it ties in with a very interesting early episode.

I was intrigued by the announcement of a newly launched vodka brand. There’s what, about a million vodka brands around the world? But this one is a wild example of Uncommon Sense in action. It involves “Air Company” and while they’re not really meaning to be a distillery, their first product, a proof of concept if you will, is indeed vodka.

“Vodka,” Wikipedia says, “is a clear distilled alcoholic beverage … composed primarily of water and ethanol…. Traditionally it is made by distilling the liquid from cereal grains or potatoes that have been fermented, though some modern brands use fruits or sugar as the base.”

Well, Air Company’s vodka …doesn’t fit that definition. Oh, it’s composed primarily of water and ethanol, but how they get there is the interesting part.

But I’m going to back up for a second since I didn’t explain what I meant that they’re not meaning to be a distillery — a maker of adult beverages. “We are a technology and lifestyle brand,” explains company cofounder Gregory Constantine, “producing consumer goods by capturing excess carbon from the air and transforming it into things of value — one product at a time.”

Well, that’s certainly intriguing whether you “believe in” climate change or not. Frankly, this sounds like magic. Carbon, in its pure form, again according to Wikipedia, is a simple chemical element — atomic number 6 — and the 15th most-abundant element on Earth. Depending on where it’s found, it ranges from a soft black powder to a brilliantly clear diamond.

Measurements of carbon dioxide in the Earth’s atmosphere have been rising since the dawn of the industrial age: researchers have been able to measure that by taking core samples of ice frozen in the planet’s polar ice caps. There’s an animated chart video of that on the Show Page.

But let’s get back to the vodka! Air Company say they want to produce “consumer goods by capturing excess carbon from the air and transforming it into things of value,” which is a wild concept, and here’s how that relates to vodka: they’re sucking carbon out of the atmosphere to run it through water to make ethanol, the chemical formula of which is C2H6O — two atoms of carbon, 6 of hydrogen, and one of oxygen. The carbon comes from atmospheric CO2 — carbon dioxide. The hydrogen and oxygen come from water, and the energy to make it happen comes from solar power. In the sense of contaminants, it’s probably the purest possible way to make vodka.

And since it sucks the carbon out of the air without using carbon-based fuel for the energy to make it happen, every bit of vodka they make is not merely “carbon neutral,” but carbon negative.

“The process uses the same principles as photosynthesis in plants,” says another company cofounder, Stafford Sheehan, “but does so more efficiently. We use carbon dioxide as one of the ingredients for our alcohol, rather than have it as an emission” — a waste product.

Their method, based partly on patent-protected technology and partly on trade-secret processes, uses no cereal grains, like rye, and no potatoes. No acres of plants to water, harvest, and boil in a still to make alcohol. Those staple foods can be used …as food.

A publicity stunt? Maybe, but the company, based in Brooklyn, is already selling their booze. At $65 a bottle it’s out of my price range, but so far they’re only selling it in New York anyway.

Sheehan is a Yale-educated Ph.D. with a background in chemistry, physics, and computer science. Their machine “can fit in any given bedroom,” he says, and “does the same role as traditional distilling, only faster and more efficient, with no impact to our environment, and all run on solar power.”

A bottle of their vodka, he says, pulls the same amount of carbon from the atmosphere as 7-1/2 trees. They’ve gotten attention from some big organizations, winning the United Nations Ideas4Change award in 2017, the 2019 NASA CO2 Conversion Challenge, and — guess what? — they’re a finalist for the current X Prize competition to convert CO2 emissions into valuable products, which is what clued me into the company: the X Prize was the subject of Episode 6 of this podcast, titled “The X Factor”, and I check in on their site from time to time to see what’s interesting. I’ll link to that competition from the Show Page.

That particular prize, by the way, is $20 million. In all, 38 teams from around the world entered, and in June after two years of testing, that field was narrowed down to 10 finalists — and then Air Company’s vodka was added to the finalist mix late in the game. The other 10, as described by the X Prize Foundation, are, in the order presented in their report:

“There’s a sense out there that climate change can’t be fixed,” said one of the contestants. “That’s something that we just adamantly disagree with.” And it sure looks like all the contestants are proving that it can not only be done, but it can stimulate huge economic benefits.

“Our long-term goal is to develop our own brand products in each category where we see an opportunity to disrupt the existing infrastructure,” says Air Company’s CEO, Gregory Constantine. “We are on a mission to change the world and save the planet. You have to start somewhere, and we are starting in vodka.”

The Show Page for this episode with links, photos, and more is thisistrue.com/podcast51, where you can also comment. If you’ve tried the new vodka, I want to know what you think of it!

Mind Triggers – This is True