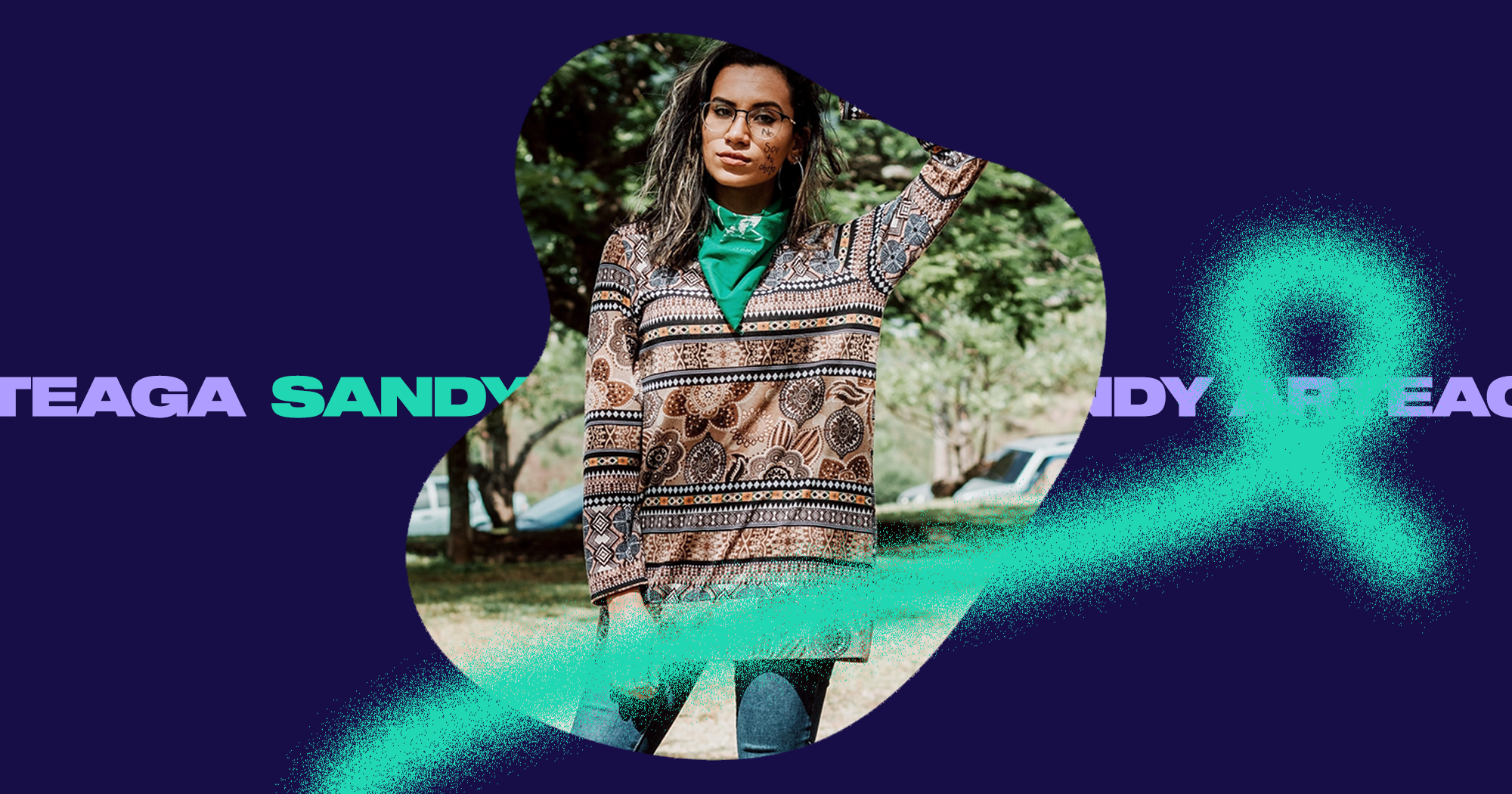 Gente Power is a monthly Somos series profiling the Latinx activists, cultural workers, educators, and movement leaders creating change in their communities and paying it forward for the next generation. This month, we’re talking with Honduran reproductive rights activist Sandy Arteaga.

Sandy Arteaga was 18 years old when she heard the story of Silvia Vanessa Izaguirre, a young medical student who was stopped by a group of men on her way home from vacation. When they attempted to rape her, she fought back and was killed. Arteaga, like Izaguirre did, lives in Honduras, a country with no protocol for the care and support of sexual assault survivors. At the time of Izaguirre’s murder, activists in the country had campaigned for years to establish a holistic plan for sexual assault survivors that included pregnancy prevention. Their opposition was able to delay their progress by citing the illegality of abortion in Honduras, and misleading the public by calling emergency contraception (EC) “the abortion pill.”

Throughout the Central American country, feminists like Arteaga have been fighting to reverse the ban on emergency contraception. It is a goal Arteaga, 22, has targeted as a member of Acción Jóven, where she spearheaded the collection of more than 700,000 signatures by canvassing on the ground for the legalization of EC. When President Xiomara Castro took office in January 2022, she promised to champion the rights of women and to legalize emergency contraceptives in her first 100 days in office. Though the deadline has lapsed, activists like Arteaga remain as focused and resolute as ever.

No one in Honduras’ feminist movement believed the election of the country’s first woman president would mean an automatic victory for women’s rights. After more than a century of political corruption, U.S. interventionism, and fascist military rule, the rights of women and girls have been strategically and effectively abolished. It’s going to take much more than one woman in power to reverse generations of harm.

Castro’s belief in the rights of women isn’t doubted. Instead, activists see the flailing administrative action as a direct result of a lack of women in her cabinet — only eight out of 35 members are women. In the previous administration, five out of 17 ministerial positions were held by women — as well as a recent political alignment with the conservative party, Savior Party of Honduras (PSH). PSH is known for their alliance with extreme right-wing religious groups and has repeatedly expressed their position against the reinstatement of EC. While Castro could issue the decree by executive order, to pass it would require the cooperation of the Minister of Public Health, Dr. José Manuel Matheu, who is a member of the PSH.

“From a very young age, I always understood our rights and that sometimes they are lacking in your country,” Arteaga, a philosophy student and leader at the National Autonomous University of Honduras, tells Refinery29 Somos. This is one of those times.

Honduras is one of the most dangerous places in the world to be a woman. According to Human Rights Watch, a woman is killed in the country every 22 hours. Even more, one in four women has been physically and/or sexually abused. Gender violence is directly tied to reproductive rights. At least 40% of pregnancies in Honduras are unplanned or unwanted. According to the Women’s Human Rights Observatory at the Center for Women’s Studies (CDM), more than 800 girls below the age of 14 became pregnant from sexual assault in 2017.

Like in many other Latin American countries, abortion is illegal in any and all circumstances, and the population lacks access to comprehensive sex education and family planning, with EC outlawed for more than a decade. After a conservative military coup d’état ousted Castro’s husband, then-President José Manuel Zelaya Rosales, in 2009, the future of reproductive rights became even more grim. In 2021, as momentum grew in favor of Castro’s Libre party, the Honduran National Congress moved to create a “constitutional shield” against abortion, preventing future administrations from legalizing it. The legislation also included same-gender marriage.

This reality makes Arteaga, a lifelong feminist, furious. In 2018, she co-founded a national movement called “Yo No Quiero Ser Violada.” Under this banner, women, girls, and LGBTQ+ allies from all over the country took to the streets that year, mobilizing protests and sit-ins, and calling out their abusers on posters and t-shirts. Despite threats and harassment, Arteaga was at the vanguard. Now, in addition to her struggle for EC, she is calling for the passage of the Comprehensive Law Proposal Against Violence Against Women, drafted by the Center for Women’s Rights, which would address and repeal the draconian laws implemented in the penal code, like three years of jail time for women who hemorrhage or miscarry.

Arteaga, now a public figure, also works as the spokesperson for the “Hablemos Lo Que Es” (Call It What It Is) campaign, which is currently applying pressure on the Honduran government to act on reproductive rights, and plans to work more directly with people with disabilities in the future. Arteaga witnessed the obstacles and marginalization of disabled communities through the experiences of her mother, who is deaf. “As a child, my first teachings — practically since I was born — were the rights of people with disabilities,” she says. “In Honduran sign language, certain words to talk about sexual, reproductive rights, or women’s rights do not exist. And now [we’re] making an investment in generating this language, which is very significant.”

The rights of women are under attack worldwide, but the political machinations of governmental bodies do not speak for the people. As with any movement, anywhere, the power lies with the people who are on the ground building community. Arteaga’s work has shown that while the majority of the Honduran population has been willfully misinformed, they ultimately believe in every person’s right to decide their own destiny.

This vision of humanity is the one Arteaga believes is possible in Honduras, no matter who holds the presidency. “I think my biggest dream would be to feel that as a Honduran I can live in a peaceful country,” she says. “It’s to not be afraid to go out on the street. It’s that the day I decide to become a mother — because I do hope to be a mother one day — I want to know that I did everything possible for my daughter to live in a culture and society that values freedom.”