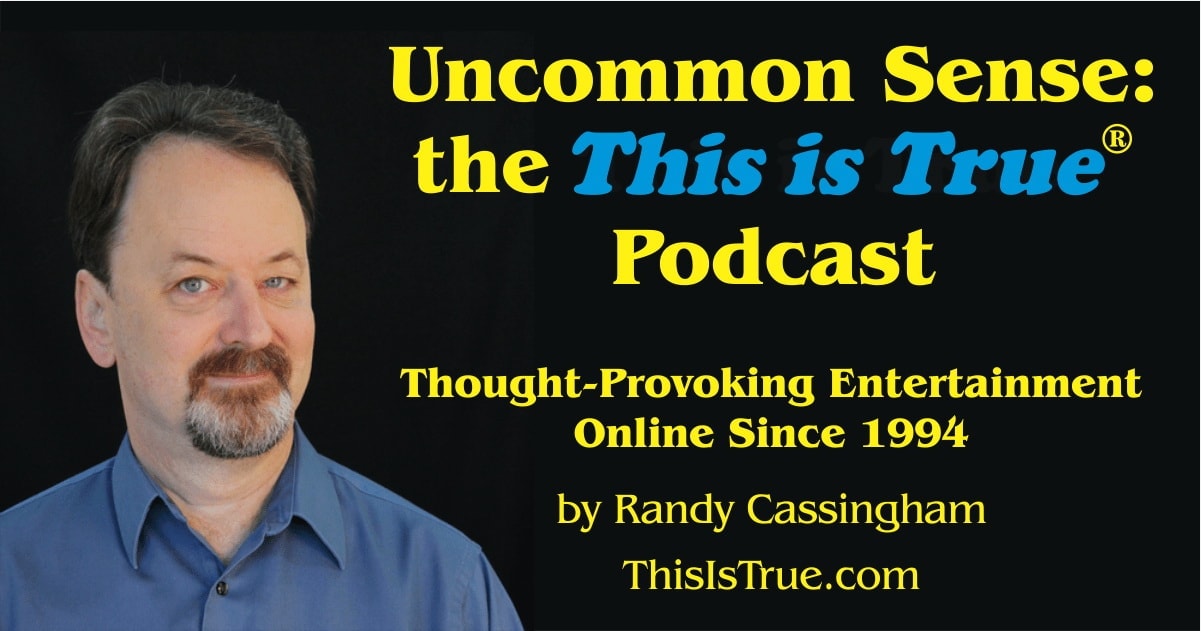 
In This Episode: Warren Buffett says the biggest impact on his massive success was one particular class he took. But it wasn’t part of his college or graduate school education. I’ll tell you what it is, for free.

In Episode 12, “Dreaming Big”, I talked about how self-made billionaire Warren Buffett was giving 99 percent of his fortune to charity when he dies. He couldn’t think of a better charity to give the bulk of it to than …Bill Gates — or really, the Gates Foundation, which is where nearly all of Bill Gates’ fortune is going too, when he dies.

The question is, how did Buffett get there? I mean, to the point where he can give away scores of billions of dollars?

It’s easy to answer “Uncommon Sense,” but without knowing the practical path, there’s nothing to gain insight from for all of us non-billionaires.

Buffett himself has given all sorts of advice over the years, particularly in his annual Letters to Shareholders. Shareholders of Buffett’s holding company that is, Berkshire Hathaway. There are books that collect them, though probably it’s faster to get a book that digests that advice by authors in the field — summaries which remove duplication. One that’s highly rated is, “University of Berkshire Hathaway: 30 Years of Lessons Learned from Warren Buffett & Charlie Munger at the Annual Shareholders Meeting” — long title! (And by the way, Charlie Munger is Buffett’s partner in the business, and its Vice Chairman.)

See the theme? “University” is what that author points to — or really, education. While that’s not the class I’m talking about, I’ll link to the book on the Show Page.

Yet this episode is not based on that book. Rather, it’s actually a brief story from another book that’s not about Buffett, but rather advice from numerous mentors including Buffett called “Getting There.” I’ll link to that one too.

The author of the latter book was surprised to discover that Buffett, like most of the population, was terrified of public speaking. “Just the thought of it made me physically ill,” he told her. “I would literally throw up.” He revealed that in college, he had some special criteria for choosing his classes: he only took classes where he didn’t have to give presentations to the class. He said he even avoided crowds, just in case he might have to talk to strangers. He graduated from the University of Nebraska at age 19, and then went to Columbia Business School.

While there, Buffett saw an ad in the newspaper for a Dale Carnegie public speaking class designed for college students. “I figured it would serve me well,” he says now. “I went to Midtown, signed up and gave them a check. But after I left, I swiftly stopped payment. I just couldn’t do it. I was that terrified.” Like most of the population!

After graduate school, Buffett returned to Omaha and took a job as stockbroker. “I knew that I had to be able to speak in front of people,” he said, “so again, I saw the ad in the paper and went down to sign up; but this time, I handed the instructor $100 in cash. I knew if I gave him the cash I’d show up.” And he did. He found that the others who signed up were also terrified of public speaking.

“There were about 30 other people in the class and we all had trouble saying our own names,” he remembers. “We met once a week for a dozen or so weeks. They would give us different types of speeches to practice and taught us psychological tricks to overcome our fears.” And here’s a key: he says, “There was that communal feeling that we were all in the same boat, and really helped one another get through the class.”

You could call it Uncommon Sense to take such a class, but that’s not quite there yet either. This is where he makes that leap: once he finished the class, he went to the University of Nebraska in Omaha and signed up to teach a class. When he was a student, he avoided any class where he would have to address others. Now he was signing up to do just that, and regularly, which he knew would give him immediate practice to solidify what he had learned, and keep him from back-sliding into his fear. He taught a night class on Investment Principles.

“I just kept doing it,” he says, regarding speaking to others, and teaching what he knows, “and now you can’t stop me from talking.”

“That $100 course gave me the most important degree I have. It’s certainly had the biggest impact in terms of my subsequent success.”

Why? “In graduate school,” he says, “you learn all this complicated stuff, but what’s really essential is being able to get others to follow your ideas. If you’re a salesperson, you want people to follow your advice. If you’re a management leader, you want them to follow you in business. Whatever you do, good communication skills are incredibly important and something that almost anybody can improve upon, both in writing and speaking.”

Of the two, I think writing ability beats speaking ability. Of course both are extremely important, but to give a speech, the first thing you need is, the speech! Someone has to write it. If you’re giving it, you had better have the skill to craft the speech so that it reflects what you really want to say. A “speech” by the way, may be someone on stage talking to an audience, but it could also be a salesman or consultant giving a presentation to just one person.

Not to mention that on the Internet, which is where most people past public school these days learn about new things, businesses that want to sell something communicate online, and mostly in writing. Even if you watch a video and decide you want to buy a product or service, you’ll probably click through to the business’s web site, where there’s text to tell you about what to do next. And that has to be written clearly, and well, to make the sale.

In other words, what prospective customers read there is a massive key to whether that business succeeds or fails.

And it’s not just for entrepreneurs. Smart employers want employees who can communicate clearly, which also helps them to better understand when someone communicates to them. The ability to convey ideas clearly, both in speech and in writing, is absolutely critical to success in the world, and that has become more true over time — the really good jobs go to the people who can do it well.

The best part, as Warren Buffett pointed out, is that good communication skills are “something that almost anybody can improve upon, both writing and speaking.” And while it’s never too late to improve those skills, it’s never too early to help your children, or grandchildren, move along that path. That’s a large part of how Uncommon Sense is developed.

“But Randy,” you might say. “You’re known as a writer, what about public speaking?” Indeed I have been a public speaker in the past, captivating some pretty large audiences. But yes, I need to develop that ability more not just to make this podcast better, but to go back out to speak to large audiences again. And to that end, I’ve started working with one of the best speaking coaches in the world. And I’m learning plenty. As I said, it’s never too late to improve such skills. You can find my speaker’s page at thisistrue.com/speaking.

The Show Page for this episode is thisistrue.com/podcast43, where you can find the links I mentioned, and a place to comment and communicate to other listeners and transcript readers …which is, by the way, done in writing.

I’m Randy Cassingham … and I’ll (yep!) talk at you later!