Rwanda deportation explained: Why are refugees being sent there and where is it in Africa? 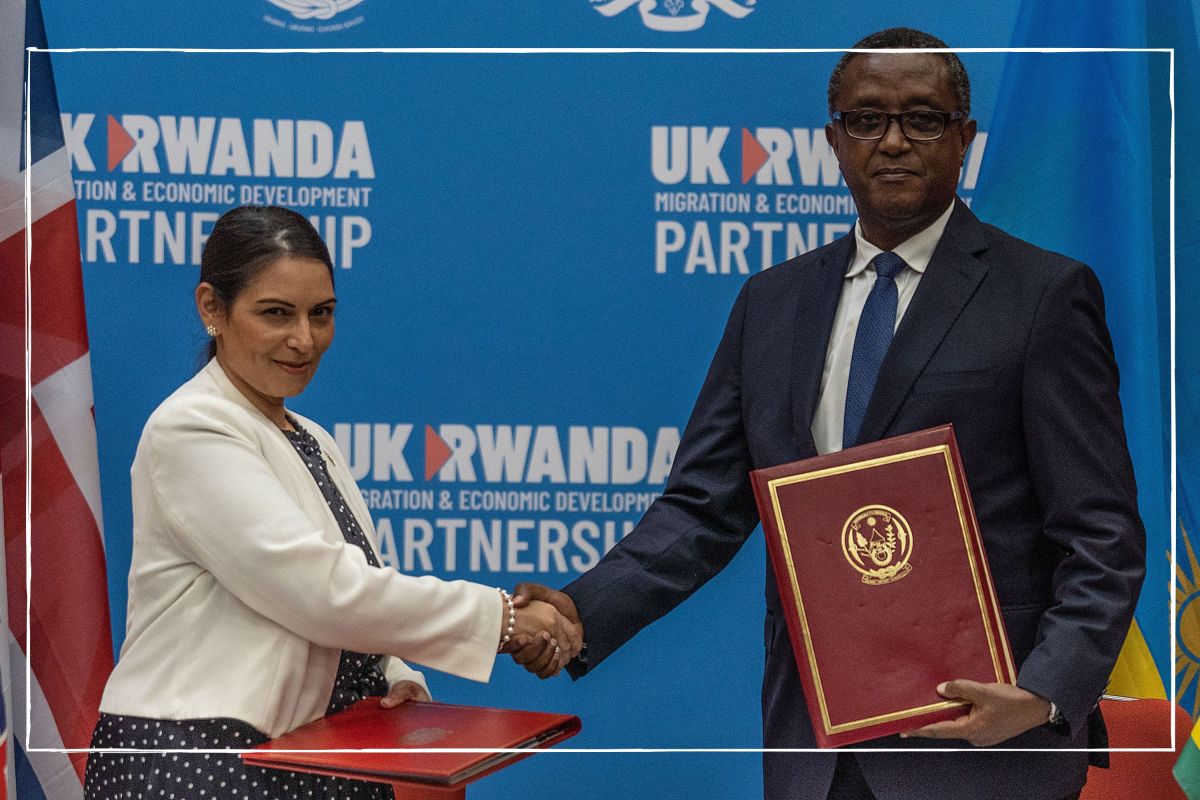 
With the first flight set to take off shortly, people are still getting their heads around the Rwanda deportation scheme and what it means.

Earlier this year the UK’s Tory government announced a new – and controversial – plan to help tackle Britain’s growing Immigration crisis. Spearheaded by Home Secretary Priti Patel, the Migration and Economic Development partnership saw the UK sign a formal deal with Rwanda, allowing the British government to deport refuges there who have entered the country illegally.

Figures from the Ministry of Defence claim that 3,599 asylum seekers crossed the channel in small boats between 18 April and 5 June this year. But whilst refugee numbers have increased in recent years, there are those who believe this radical plan to be immoral and in breach of human rights. We break down the scheme and answer people’s most-asked questions.

Why are refugees being sent to Rwanda?

In April 2022, Boris Johnson announced the Nationality and Borders Bill (opens in new tab) which will send refugees who have entered the UK illegally to Rwanda. According to the Prime Minister the deportation scheme hopes to tackle “illegal migration”, “clean up the abuse of our legal system” and “defeat the people smugglers”.

Operating as an initial five year trial, the Rwanda partnership will specificially send “people who have taken dangerous, unnecessary, and illegal journeys, including crossing the Channel” to enter Britain. The government confirmed that this will include anyone who has “arrived illegally since January 1st” of this year.

In return, Rwanda will provide safe asylum, legal aid and equal access to employment and other services to these new arrivals. The government confirmed that this “new life” will be “supported by the funding that we are providing”.

“I believe this plan is the right way forward, because the people smugglers must be stopped in order to save countless lives; and because tackling illegal migration is precisely the way to sustain a safe, legal and generous offer of sanctuary to those in need,” said Boris Johnson in his closing remarks.

Controversy and Court of Appeal

Over 160 charities and campaign groups have condemned the Rwanda deportation plan, with many calling it “unfair” and “unlawful”.

Charity Asylum Aid (opens in new tab) have called the plan “unfair” as it does not give enough time for those at risk of deportation to seek legal aid and appeal for their right to stay.

Several have taken legal action against the government to prevent plans from going ahead. A judge is set to formally decide whether the policy is lawful in July, but in the meantime attempts have been made to stop the first flights to Rwanda – which are set to take place before this full hearing begins.

Charities Care4Calais (opens in new tab) and Detention Action (opens in new tab), as well as the civil servants union PCS (representing Home Office and Border Force staff) submitted a last minute injunction to stop the first flight. However, the High Court rejected this injunction on Friday 10 June. And the Court of Appeal upheld the same verdict on Monday 13 June, stating that it was in the “public interest” for the government to carry out its policies.

🚨BREAKING🚨 Court of Appeal has rejected our appeal, meaning an injunction won’t be issued and tomorrow night the Home Secretary can force people seeking asylum on to a plane to #Rwanda. We are disappointed but our larger legal challenge against the policy will be heard in July.June 13, 2022

In a victory for the government, Boris Johnson told LBC: “I have the utmost respect for the legal profession but it is also important we stop criminal gangs.”

It’s not just charities who have condemned the Rwanda deportation policy, with a number of public figures also condemning the plan.

Leaders from the Church of England – including the Archbishop of Canterbury Justin Welby – signed an open letter in The Times (opens in new tab) calling it an “immoral policy that shames Britain”.

“The shame is our own, because our Christian heritage should inspire us to treat asylum seekers with compassion, fairness and justice, as we have for centuries,” the letter reads.

Filippo Grandi, head of the UN Refugee Agency also publicly stated plans were “all wrong” and could set a “catastrophic” precedent. Whilst The Times have reported (opens in new tab) that Prince Charles has criticised the scheme privately.

He allegedly called the policy “appalling” and is displeased with the timing too – as he’s set to travel to Rwanda later this month to represent the UK at the Commonwealth Heads of Government.

Protests in London continue to take place as the first flight for Rwanda is set to leave soon. Large groups of activists have gathered outside the Home Office to share their outrage over the scheme.

We’re outside the Home Office to stand against this government’s cruel plan to send people fleeing torture & war to Rwanda #StopTheFlights pic.twitter.com/fFW9uUpXj6June 13, 2022

How many refugees will be sent to Rwanda?

Unveiling the plans in April, Prime Minister Boris Johnson suggested there was no limit on the number of refugees that could be sent to Rwanda. “The deal we have done is uncapped and Rwanda will have the capacity to resettle tens of thousands of people in the years ahead,” he wrote.

The Home Office told the BBC that 37 people were originally destined to be on board the first flight to Rwanda. However, this number is now believed to be under 10.

According to charity Care4Calais, the current number of passengers is now 7.

BREAKING: Correction – ONE more Rwanda deportees has had their ticket cancelled. The current total number with tickets for tomorrow’s flight is seven.June 13, 2022

Where is Rwanda in Africa?

Rwanda is located in east-central Africa, just south of the Equator line. It is a Republic completely landlocked – with Uganda to the north, Tanzania to the east, Burundi to the south, and the Democratic Republic of the Congo to the west.

As of 2020, the World Bank (opens in new tab)put the population at 13 million people. There are three recognised languages in Rwanda – Kinyarwanda, French and English.

When is the first flight to Rwanda?

The UK’s Foreign Secretary Liz Truss has confirmed that the first flight containing refugees being sent to Rwanda will take place on the evening of Tuesday 14 June 2022.

In an interview with Sky News (opens in new tab), she confirmed: “We are expecting to send the flight later today. I can’t say exactly how many people will be on the flight.” The media outlet and charity Care4Calais has however reported that they understand 7 people will be on board.

The first flight is reportedly costing more than £500,000 to operate, according to the BBC (opens in new tab) and Sky News.

Multiple flight operators estimate the average flight time from UK to Rwanda takes 8 hours and 57 minutes. The flight arrives into the Kigali International Airport (the capital city of Rwanda).

The Home Office has confirmed that the government is investing £120 million into the Rwanda deportation deal, with this money helping “the economic development and growth of Rwanda”.

Home Office minister Tom Pursglove has said that this “payment upfront” is likely to be followed by further contributions to Rwanda as it continues to assist Britain with asylum cases.

Defending this, he said that the overall cost would be “similar to the amount of money we are spending on this currently” and that “longer term, by getting this under control, it should help us to save money”.

According to a statement on the government website: “The partnership forms part of the New Plan for Immigration, the government’s response to overhaul the asylum system – which is currently costing the UK taxpayer £1.5 billion a year – to create a fair but firm immigration system.”

Labour’s shadow home secretary Yvette Cooper has argued against these figures, arguing that the sum is likely to be “substantially higher”. This is in addition to Labour’s shadow culture secretary Lucy Powell, who told Sky News: “We think this policy is unworkable… it’s incredibly expensive. It’s going to cost possibly over a million pounds per unsuccessful or successful refugee going to Rwanda.”