Nakia’s Speech From Ms. Marvel Episode 2 Is Something We’ve Never Seen On TV 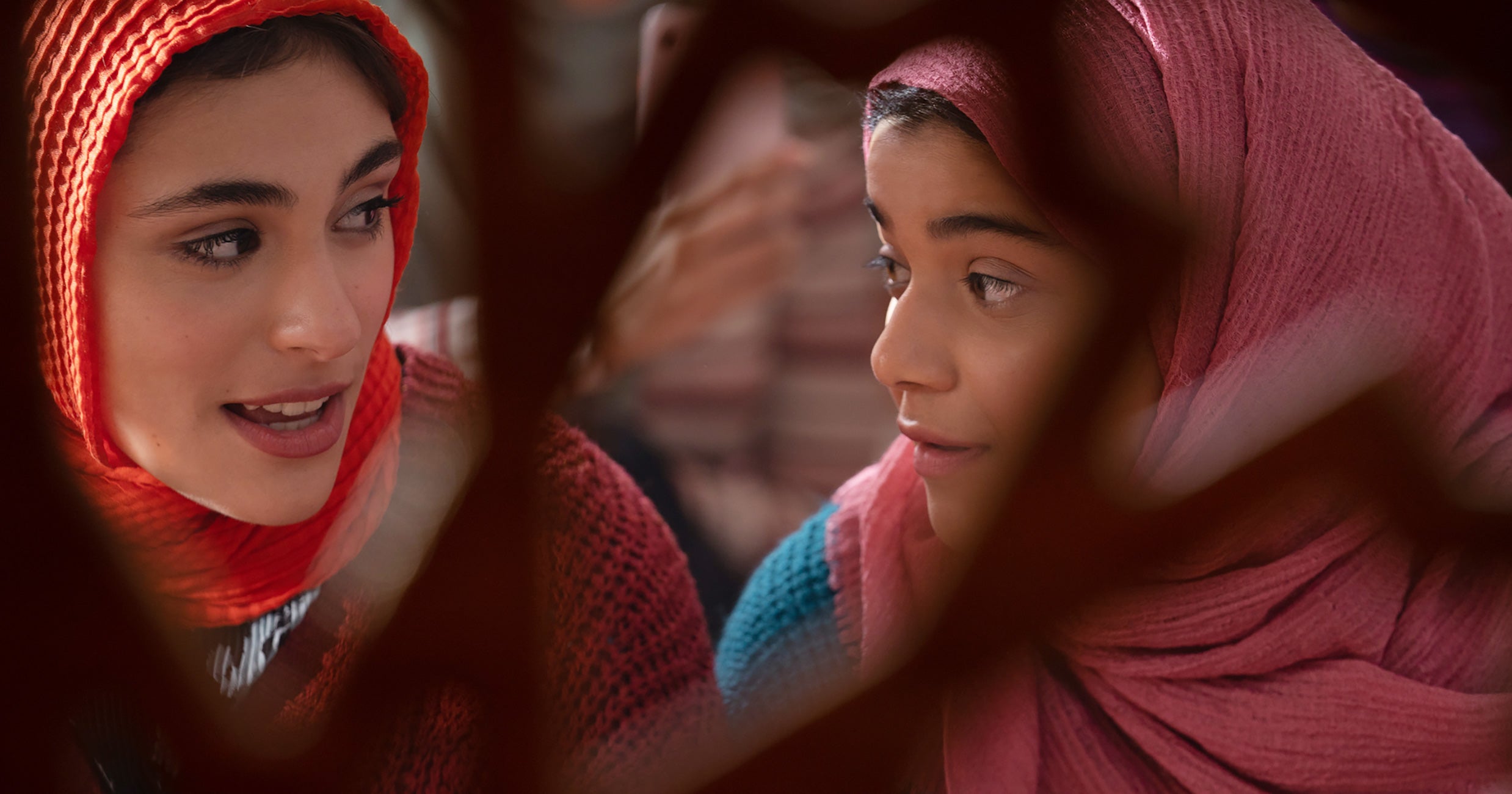 Spoilers Ahead. In the second episode of Disney+’s Ms. Marvel — an already groundbreaking series for its depiction of the Marvel Cinematic Universe’s first Muslim superhero — comes a pretty revelatory moment in the most unlikely of places: a high school bathroom.

After a mishap where she nearly reveals that she has powers, Kamala Khan (Iman Vellani) laments to her BFF Nakia Bahadir (Yasmeen Fletcher), “Everything’s just changing really fast, Nax. I feel like I can’t keep up.” On the surface — at least to Nakia, who has no idea her Pakistani American friend from Jersey City is a literal superhero — she’s talking about growing up and finding her place as a young adult, a time when you’re rife with emotions, stress, and hormones. To Kamala, and to us who know the truth, she’s talking about dealing with and harnessing the responsibilities that come with finding out you can walk on air and protect yourself with a shield. It’s a relatable moment even for someone who doesn’t have superhuman powers — the idea of struggling to fit in.

But then Nakia, who wears a hijab in both the comics and the series, takes the moment further, relating Kamala’s search for a place in the world to her own struggle to find purpose, as someone who’s growing up between two cultures and has chosen to wear a hijab. The experience, as Nakia explains, has been far from a walk in the park. “Easy? It’s definitely not easy,” she tells Kamala. “My whole life I’ve either been too white for some people or too ethnic for others, and it’s been this very uncomfortable, sucky in-between. When I first put [my hijab] on, I was hoping to shut some people up, but I kind of realized I don’t need to prove anything to anybody. When I put this on, I feel like me — like I have a purpose.”

It’s a subtle moment, shared between two friends hugging among the graffiti and stale smell of a girl’s school bathroom, but it — like Kamala — is über powerful, addressing a reality and experience not talked about enough on screen in western culture, the struggle to grow up in the in between. The conversation equates Nakia’s hijab and identity with Kamala’s superpowers, reframing a religious head covering often vilified in western cultures in a positive and powerful light (as many of those who actually wear one have always seen). And more importantly, purposefully so.

For many years in pop culture, this hasn’t really been the case. Historically, young South Asian and Middle Eastern women — if they’ve been depicted on screen at all — have had to grapple with pretty limiting and sometimes straight up offensive representations. Often, the trope is the same: a young brown girl is depicted as meek, nerdy, voiceless, and essentially powerless, usually against the wills and desires of her family. It doesn’t really matter where geographically or culturally she’s from. The throughline is that she’s brown as the wide spectrum of individual cultures are, of course, all conflated. We saw it from an early age and to a pretty big extreme with Disney princess Jasmine, who’s kidnapped and locked away by Jafar. Or, the woman on our TV is unable to fully embrace her culture without assimilating to the dominant western culture, like Jess Bhamra in Bend It Like Beckham. Thankfully these depictions have started to change, with the premiere of shows like Never Have I Ever, Ramy ,and Sort Of.

“Growing up, not only women of color, but women in general were made to feel really small and invisible and told to be quiet and that their voices only matter when people tell them that their voices matter,” Yasmeen Fletcher tells Refinery29. “That was a really big thing for me growing up, that I didn’t feel like if I said anything, anybody would be listening because there was another guy that was saying the same thing a little bit louder.”

Blending two cultures — and never feeling like she was fully either — “it put me in a very small box and it took a very long time for me to feel comfortable enough to break out of it,” she says. Seeing a character like Nakia on screen when the 19-year-old actress was younger would have been monumental. Fletcher, an OG fan of the comics (Nakia was always her favorite), is still finding her footing and her confidence in that, even with the support of older family members who’ve given her the encouragement and confidence to be more open about talking about her experience.

That’s why, for Iman Vellani, who plays Kamala, this scene in the bathroom, an emotional filming day for both actresses, is really the baseline of the show. “We all feel like we’re kind of in between worlds, me being part Canadian, part Pakistani; in Pakistan, I wouldn’t be considered Pakistani, but in Canada, I’m not seen as fully Canadian either. So it’s a constant struggle.”

The themes of the show, Vellani says, are about separating labels and expectations, and becoming your own, authentic self, someone who isn’t defined by all their labels, but ultimately embraces the diverse parts and aspects of their identity. Because that’s just who they are. For Kamala, that’s a 16-year-old, driver’s license-less teen with supernatural superpowers. And for Nakia, it’s a Lebanese American, hijab-wearing teen who’s running for president of her local mosque.

Ultimately there’s power in identity. What makes this particular scene so breathtaking is the parallel between Kamala’s superpowers and Nakia’s identity, as seen through her hijab. Like Kamala’s Ms. Marvel cape, Nakia’s hijab is a similar source of power, a means for her to portray her true self and something that makes her feel special and gives her purpose in the world. It’s a subtle yet powerful framing that’s different from the many narratives we tend to see around Muslim characters — which often frame religious garments like hijabs as oppressive (and let’s not even touch super racist depictions like in the second Sex In The City movie).

This idea of brownness as power isn’t unique to this scene alone. The object that gives Kamala her powers is a bangle from her nani, a literal and physical connection to her culture and heritage. Kamala’s other friend Bruno also pushes back on the idea that brown girls from Jersey City can’t save the world, explicitly telling her: “Sure they do. You’re Kamala Khan. If you wanna save the world, then you’re going to save the world.”

But conversations about identity on screen are more important than ever because people are still showing hate toward diversity and power on their screens. Since Ms. Marvel premiered in early June to critical acclaim and a 97% score on Rotten Tomatoes, it has been “review bombed,” a trolling practice where online users give a show negative reviews en masse to bring down its rating score. The thing is Ms. Marvel is good — in fact, it’s great, and that’s coming from someone who doesn’t stan Marvel. The underlying message seems to be that people are upset with the idea of a Muslim, South Asian girl at the helm of the latest offering from the world’s most successful film and TV franchise.

“Seeing that [Kamala] has such a healthy relationship with her family and her culture, it’s really refreshing to see,” Vellani says, “especially because many times in Hollywood the only time I ever see young Muslims on screen, they’re trying to get away from their culture, or their religion, or their parents. It’s something that’s holding them back from finding their true self. But in this case, we actually see her using that as something that motivates her and really acts as a moral code. I think that’s so wonderful.”

Ms. Marvel Isn't Something I Dreamed Would Exist