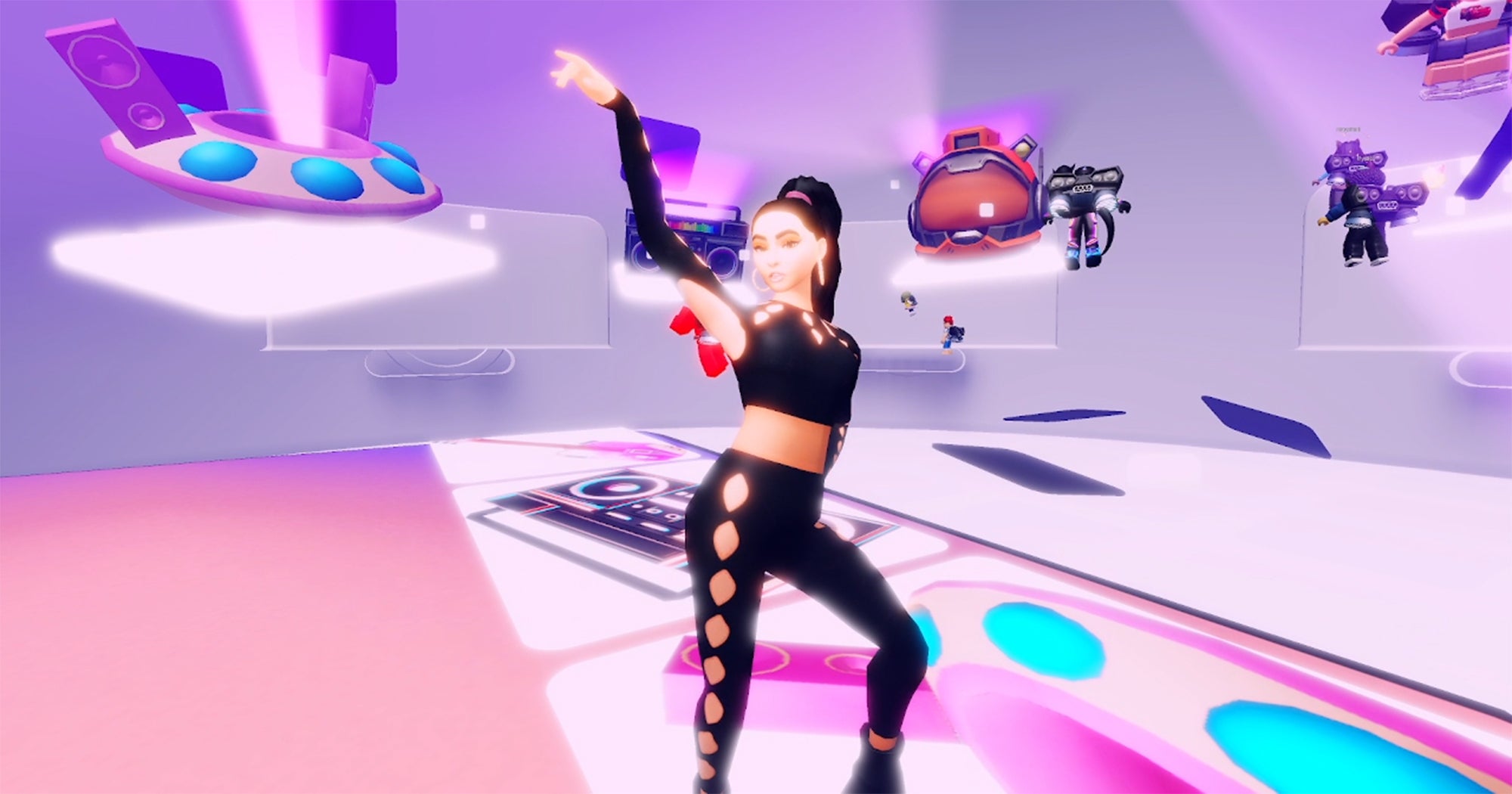 “Is this purgatory?” someone asks in the Samsung Superstar Galaxy chat as a colossal, digital manifestation of English hyperpop queen Charli XCX cycles through five of her most popular songs. No, fellow Roblox user, this isn’t purgatory. This is a metaverse concert.

As someone born firmly in the 20th century, I am far from the target demographic for Roblox, an online platform used by over half of kids in the US and saw nearly 50 million daily users across 180 countries in 2021, according to the company’s self-reported numbers. But I jumped at the opportunity to cover a Charli XCX metaverse concert in Roblox last Friday, hoping the experience would give me greater insight both into my niece and nephew’s leisure activities and into what the metaverse, you know, is. Worst case scenario, I get to listen to some Charli XCX bops and support the artist in her latest musical experiment.

What is a metaverse?

Broadly, the term “metaverse” describes 3D virtual worlds where users can interact using avatars. But the definition — like the technology itself — is very much a work in progress. Metaverse immersion is heightened by the use of virtual reality technology like Meta’s Oculus Quest 2 or augmented reality technology like Google Glass, but these virtual worlds can also be experienced through any game you play on a PC, phone, or gaming console. If you’ve played Animal Crossing, then you’ve already experienced a rudimentary closed version of the technology. If you’ve watched the anime Belle, then you’ve seen a balanced vision of our potential metaversal future.

Tech corporations like Microsoft and Meta (aka Facebook) would have us believe a network of metaverses is the inevitable future of how we work, play, socialize, and shop. Maybe it is. Right now, however, many have only just begun trying metaverse avatars on for size. It’s a process still very much in its infancy — and one with some highly visible seams and a wide spectrum of execution as more music artists experiment with metaverse performances. In Fortnite, Travis Scott has teleported and Ariana Grande has commanded the clouds. In Scavengers’ ScavLab, K-pop singer AleXa has danced with 1,400 fans live in one virtual arena. Charli XCX’s foray into a digital universe comes with a few surprises — and a few kinks.

The concert is held in space, and I’ve always wanted to visit, in a Star Trek kind of way, and definitely not like Sandra Bullock’s fight with Gravity. I spend the hours leading up to the big event exploring the digital environs of the Samsung Superstar Galaxy space station, where fans are encouraged to build their own performance stages. Accompanied by a steady soundtrack of Charli XCX hits, I dance at Tron-lined Cyber City, inspect the extraterrestrial flora and fauna of the Cosmic Wilds terrarium, and wander the desert festival hub of Sunfest Valley. And yes, you can also die in the Samsung Superstar Galaxy. At one point, I get stuck in the liminal space between two shopping plazas, eventually and inadvertently walking off the space station edge to my virtual death. Once respawned, I windowshop the merch, trying on different outfits and testing out dance moves before moving on without buying. My wallet is light since I haven’t collected enough of the glowing, regenerating stars liberally scattered throughout.

In the minutes before the show, I abandon my attempts to conquer the Falling Lava obstacle course to gather at the doors of the concert arena. I watch the countdown clock tick down with other Charli XCX fans, whose avatars are far cooler than my factory skin. “if i dont hear claws i riot,” one user chats. “we need anthems too,” writes another. As the clock drops below the minute-mark, the patter of little avatar feet increases, as does my level of anticipation. Then the clock finally hits 00:00:00, and we fall into the metaverse concert… and keep falling, again and again, through the same virtual space. “GLITCH ERA,” someone write in the chat. “WHY WE ALL JUMPIGGG,” another asks. I’m not qualified to answer.

After 20 seconds of “jumpiggg,” our avatars settle on the virtual arena’s floor. There is Roblox Charli XCX, unintentionally haunted by a T-posing specter of herself. Throughout the show, her main avatar (because there comes a point when one has to specify) occasionally regresses into its mo-cap suited form. “tag yourself,” one of my fellow concert-goers chats. “i’m the floating charli.” We are on the stage, in the performance, dancing at the feet of digital Charli’s Brobdingnagian yellow boots. She leads us through a 20-minute set featuring ”Good Ones,” “New Shapes,” “Gone,” a “Claws”/”Used to Know Me” mashup, and “Boom Clap.” Each song includes a different immersive setting, with Roblox Charli’s fits and hairstyles changing to match the virtual environment. While the stages are inspired by some of her real-life performances, the team behind the concert was able to “amplify and exaggerate and make my wildest dreams come true,” Charli tells Refinery29 a week earlier. In a real-world performance, there are obvious limitations governed by the laws of physics. “There are no limitations here, which is super amazing.”

Concert stages that would take hours or even days to set up in the real world are implemented instantly in the metaverse. For “New Shapes,” concert-goers climb stacks of larger-than-life video cassettes scattered around the stage, reminiscent of the music video featuring Christine and the Queens and Caroline Polachek. For “New Shapes,” we get hoverboards. For “Claws”/”Used to Know Me,” we bounce on the domes of rainbow bubbles, giving a better vantage point from which to keep an eye on Charli’s T-posing clone. Even with, and perhaps in part due to the glitches, I find myself looking forward to what the next song will bring, whether I’d be flying or falling, dancing amidst a shower of rose petals, or galloping through an asteroid field. Whether there would be one giant Charli, or three.

The future isn’t here yet

Glitches aside, I get glimpses of the potential behind a metaverse concert as a site of vivid imagination and fan-artist connection. “i feel like she’s right here,” one fan writes in chat during the concert. It’s a response Charli was going for. “I’m hoping that some fans who might not have been able to come to one of my live shows on this recent tour might be able to have their own unique experience of my music and also be able to connect with other members of the fan community,” she says. “Whether it’s my fans or Roblox fans or whatever within the concert, [I hope they] just have a really good time.” All you need to attend is a free Roblox account and stable internet connection, making the experience much more accessible compared to IRL concerts, which are not viable options for many due to factors like geography and class.

I entered Roblox eager to find out what a metaverse concert is meant to be. Now on the other side, I still don’t have an answer, mostly because I don’t think the companies and users building these virtual experiences know yet either. They’re still figuring it out, and there’s potential for both astonishingly imaginative success and hilariously messy failure in that process. In the meantime, don’t feel bad if you’re not sure what the metaverse is yet. As far as I can tell, the definition is still up for grabs.

So How Is It Really? Working In The Metaverse

In The Metaverse, Sexual Assault Is Very Real