Who is the father of Charmaine’s twins in Virgin River? 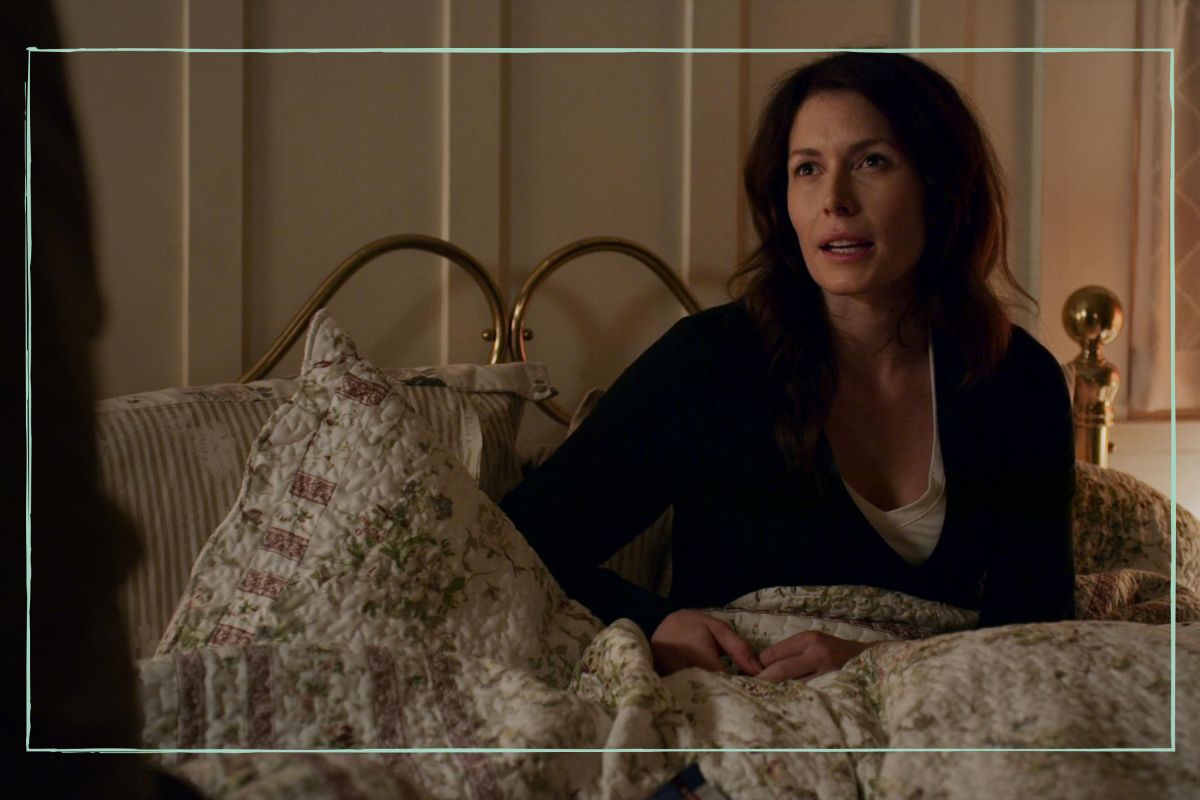 Charmaine and her twins are causing a lot of trouble in paradise – but is Jack really the father?

Virgin River fans waited patiently for the bubbling chemistry between Jack and Mel to turn into a relationship. The path to romance was never going to be easy, with the baggage Mel was carrying from the loss of her daughter and death of husband Mark. Life was just as difficult for Jack, who appeared to be suffering PTSD from his time in Iraq, and always seems to be sipping from a glass of something strong. Looking like their love might finally inch across the finish line, Charmaine – Jack’s occasional girlfriend – dropped the massive curveball that she’s pregnant. Not only is she pregnant, she’s pregnant with twins. Viewers keen for a Mel and Jack happy-ever-after, have speculated the twins aren’t Jacks. And with season 4 dropping any day now, we’ve rounded up everything we know about the paternity of the babies, and who could be the father.

Not the only Netflix series gripping viewers this month – the latest incarnation of the Resident Evil franchise has landed on Netflix. True crime documentary Girl in The Picture continues to ride high in the Netflix charts, leaving viewers asking where is Franklin Floyd now (opens in new tab)? Fans of Breaking Bad and Saul Goodman are also still waiting patiently for the streaming giant to drop the crossover episode, where Walt and Jesse appear in Better Call Saul season 6  (opens in new tab).

Who is the father of Charmaine’s twins?

As far as the characters and viewers are aware, Jack is the father of Charmaine’s twins. The two were together at the time of conception, and Charmaine has given Jack no reason to think he isn’t the father.

However, sleuthing fans have been digging, and speculation is rife that Jack is not the real father. CheatSheet (opens in new tab) reported they’ve uncovered a scoop exposing Mike as the real father of the twins. They suggest that Charmaine’s lack of baby bump indicates she isn’t as far along as she says.

As each new series of Virgin River picks up around 3 – 4 weeks after the end of the previous one, Charmaine would definitely be showing by now within that timeline. She has been pregnant since season 1, and in season 3 there was still no sign of a baby bump. This would be unusual, especially when pregnant with twins (opens in new tab). Speculation suggests she became pregnant after the split with Jack, but is trying to pin the pregnancy on him.

The character of Mike arrived in season 2. He’d never been mentioned before, and seemed to know a lot about Jack and Charmaine’s relationship. He also seemed really surprised when Jack confided in him about the pregnancy – some have said a little too shocked. The theory stands that Charmaine began seeing him after splitting from Jack, and the babies are his. This could be the reason his character arrived so unexpectedly in the series – to be exposed as the paternal father and pave the way for Mel and Jack to be together unhindered.

He initially said that not having shot any scenes with Charmaine actress Lauren Hammersley, would make it difficult for Brady to be the father. However, just because viewers don’t see them together, doesn’t mean it didn’t happen. He then teased “But, it could be, I don’t know, we’ll see what’s in store”. Fans have jumped on this as an admission Brady will be revealed as the dad.

Do Jack and Charmaine have twins in the books?

In Robyn Carr’s book series, the character of Charmaine has a very small role. She is Jack’s girlfriend at the beginning of the first book, and Jack dumps her when Mel arrives and he develops feelings for her. In the books, Charmaine is unfazed by the relationship ending, and leaves Virgin River. In the series, Charmaine’s unrequited love for Jack borders on obsession.

Speaking to Parade (opens in new tab) about altering the storyline, Virgin River showrunner Sue Tenney said “Charmaine is dealing with unrequited love because she loves Jack, but Jack doesn’t love her. Mel and Jack want to be together, but Mel isn’t ready.

“So for us in writing this, having Charmaine be pregnant adds to the complications – when you are with somebody, breaking up or getting divorced is one thing, but children are forever”.

However, in book 5 entitled ‘Second Chance Pass’, a very similar storyline to Jack and Charmaine’s takes place – involving different characters. Jack’s fellow Marine friend Paul, has a relationship with widowed Vanessa. Shortly after declaring his feelings for Vanessa – a former girlfriend of Paul’s named Terry – announces she is pregnant with his baby. Eventually, it transpires that Terry’s baby isn’t Paul’s – fans are hoping this is inspiration for Jack and Charmaine’s storyline, and the babies won’t be his.

Who is Todd in Virgin River?

Todd is Charmaine’s new fiance. Season 2 ends with Charmaine raging at Jack for wanting to pursue a relationship with Mel. She makes it clear she will punish him by finding somebody else, who she would use to take his place as father of her unborn babies.

Season 3 picks up with Charmaine in part carrying out this threat, as she has indeed met somebody else – Todd. Played by Patrick Sabongui, Todd is a personal injury lawyer. He moves rapidly from Charmaine’s boyfriend, to her fiance. The two eventually marry in secret.

Charmaine has never been a popular character in the show, and it appears Todd is equally as unpopular with viewers. Posting to Twitter about the pair, one user wrote “Update: finished Virgin River. I hope everyone has a nice slumber –  besides Charmaine and Todd”. Other users said they “can’t stand” Todd, with one suggesting (opens in new tab) “throw Todd in a volcano”.

Update: finished Virgin River I hope everyone has a nice slumber besides Charmaine and Todd. 🙃July 26, 2021

How did Charmaine meet Todd?

Charmaine says she met Todd when he was a customer at her hair salon. Charmaine’s salon is in nearby Clear River, and viewers have seen her a handful of times at her place of work.

However, her first meeting with Todd was not a scene viewers were privy to, it was only suggested by Charmaine later in the series. Whether Charmaine’s feelings for Todd are genuine, or she is still using him to get at Jack for his rejection of her, remains unclear.

Actor Patrick Sabongui who plays Todd, announced his arrival to the show by sharing a picture of himself with co-star Lauren Hammersley (Charmaine) to his Instagram account. He captioned the photo “Hello World. Meet Todd Masry, Charmaine’s new friend”.

Todd’s behaviour on the show suggests he is abusing Charmaine. He is not physically abusive, but mentally and emotionally abusing her in the form of gaslighting (opens in new tab).

Presenting an outwardly loving front, Todd is gradually coercing Charmaine to make decisions she would be unlikely to make if he weren’t pulling the strings. He begins with small things, such as encouraging Charmaine to give away the dog Jack gifted her – Charmaine loved the dog, who was a great support when she had hyperemesis gravidarum (severe morning sickness (opens in new tab)).

Todd later suggests the couple move away from Virgin River, to Eureka. Charmaine has previously toyed with the idea of moving away, but to be closer to family. Moving to Eureka would isolate her from family and friends, meaning she would be dependent on Todd.

Not only that, Todd is encouraging Charmaine to cut all contact with Jack. Jack has made it clear he wants to be a part of the babies’ lives, despite not wanting to be with Charmaine. He has bought a new house for himself and the children, basing his choice on the property being child friendly with plenty of outdoor space. Cutting him from the children’s lives for no reason, is cruel and controlling of Todd.

Virgin River season 4 arrives on Netflix on July 20, 2022. There will be 12 episodes in total for viewers to watch, each one lastign around 1 hour in length.

There are 3 Netflix packages (opens in new tab) available to purchase. The cheapest package costs £6.99 per month, and this includes unlimited access to the Netflix catalogue.

With the basic package, subscribers can only stream from one device at a time. At £10.99 per month, the standard package also includes the entire Netflix catalogue, but allows simultaneous streaming from 2 devices. This package also has shows in HD, and allows downloads to mobile devices.

The final premium package costs £15.99 per month, and features bonuses including allowing streaming across 4 devices, and contains most of the catalogue in Ultra HD.

Video of the week