Is Mel pregnant and who is the father? Virgin River season 3 recap 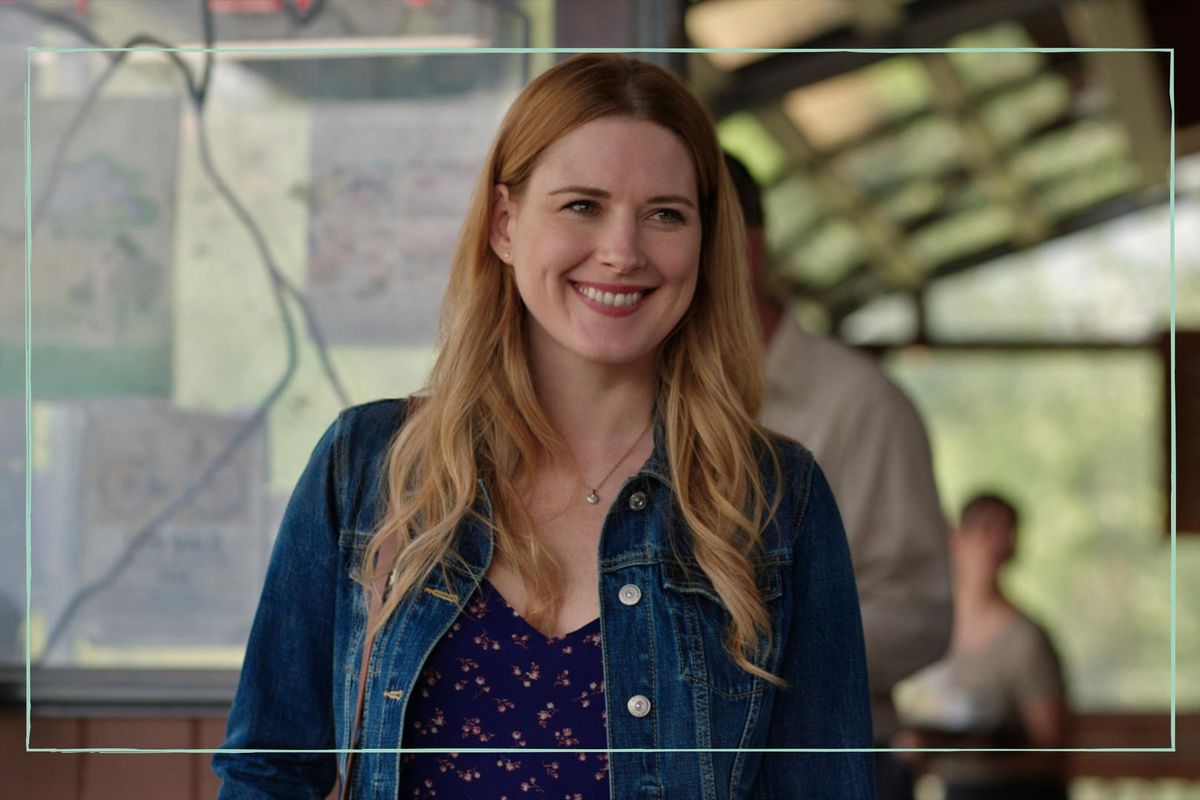 After struggling with infertility and bereavement, is Mel’s pregnancy the key to the happy ending she deserves?

For a sleepy rural town, Virgin River has seen its fair share of drama. When bereaved Nurse Practitioner Mel Monroe moved to the isolated California backwater, she was trying to escape her demons and find peace. So far, her new life with the colourful characters of the small town has been anything but peaceful. In her working life she’s had to win over grumpy boss Doc, who made it clear her presence in his practice was unwanted. She’s also struggled with her feelings for local bar owner Jack, and the many hurdles the two have been forced to jump through to be together. Here’s everything we know about Mel becoming a mother, and a recap of Virgin River season 3.

Mel isn’t the only town resident struggling with love – rival Charmaine is pregnant with twins in Virgin River (opens in new tab), and fans aren’t sure Jack is really the father. Along with issues of paternity, the Stranger Things season 5 release date (opens in new tab) is also under intense speculation by Netflix fans, with all 4 current seasons riding high in the streaming giant’s top 10. Also maintaining an impressive run at the top of the Netflix charts, the Umbrella Academy season 3 ending (opens in new tab) has left fans wondering about the fate of the dysfunctional adopted superheroes.

Is Mel pregnant at the end of Virgin River season 3?

Yes, at the end of season 3, Mel has revealed she is pregnant. During season 3 episode 10 – the final episode of the series – Jack is about to propose to Mel. Just before fans get to see the moment 3 seasons has been building up to, Mel stuns Jack by announcing her pregnancy.

In previous flashbacks, we know that Mel lost a baby daughter when she was living in Los Angeles, to stillbirth. Following that tragic incident, she struggled with fertility, and was undergoing IVF with her then husband Mark. After Mark’s death and Mel’s move to Virgin River, she appeared to make peace with never realising her dream of becoming a mother, focusing instead on delivering local babies in her role as Nurse Practitioner and Midwife.

However, during season 3, Mel reignited the idea of being a mother, despite Jack not being hugely on board with the idea. Speaking to Entertainment Weekly about Mel’s resurfaced dreams of pursuing motherhood, Mel actress Alexandra Breckenridge said “When I initially read that scene I thought, ‘Wow, that is a big thing to jump into'”.

She continued to add: “But when I look at her journey and how much she’s wanted to become a mother for so long…that is a driving force with her. She gets to this place where she feels that she has to be open and honest with him at this point in their relationship, because it is something that she really wants. She wants that intimacy, she wants that honesty, and she is willing to dive in”.

Is Mel pregnant with Jack or Mark’s baby?

When delivering Jack the news, Mel also says she doesn’t know who the father is. She says it could be Jack’s, or deceased husband Mark’s. This is an even bigger bombshell for Jack to take, who is already dealing with other paternity issues

Jack split from Mel when she began talking about trying for a baby. With Charmaine already pregnant, and marrying another man whom she made clear would act as the babies’ father, Jack didn’t want the extra complication of another baby.

Not wanting to get in the way of Mel’s dream, he split from her to allow her to become a mother with another partner, if her desire for a child was so strong. With this baby news dropping at an already precarious time in the couple’s relationship, season 4 will tell if the couple can survive yet another obstacle thrown at them.

It appears that Twitter users are overwhelmingly hoping the baby will be Jack’s. This is unsurprising as so many have spent 3 seasons rooting for the popular couple. One Twitter user posted a poll, asking “Who do you think is the father of Mel’s baby?” 97.6% of respondents felt Jack would turn out to be the father.

How can Mel be pregnant with Mark’s baby?

While Mel and Jack were on a break, Mel travelled to Los Angeles to undergo IVF using the remaining embryos from her previous treatment with Mark.

Fans were initially confused as to how Mark could be the father, as he had been deceased for over a year before Mel announced her pregnancy. However, it later transpired that in her quest to become a mother, Mel had decided to have one last go at fertility treatment with her remaining embryos before returning to Virgin River.

Even with this information, fans remain unconvinced about Mark’s potential to be the father. Mel travelled on a whim to Los Angeles to discuss the treatment with her Dr there. However, the process of IVF can take over 4 weeks, and with some of the assessments and tests required to ensure optimum conditions for the embryo, can take even longer.

It therefore appears unlikely that the IVF would have worked. Even if Mel’s Doctor did agree to implant the embryos in the short time she was away, if she were truly infertile she would’ve been required to prepare her body to receive them. She also appeared to announce the pregnancy as soon as she returned to Virgin River, and would also have been unlikely to have a positive pregnancy test in that period of time.

Does Mel get pregnant in the Virgin River books?

Yes, in Robyn Carr’s Virgin River book series, Mel and Jack eventually have a baby boy named David. However, in the books, Mel did not lose a child – this element was made up purely for the tv show.

Mel actress Alexandra Breckenridge took to Instagram to share videos of herself trying on her baby bump prosthetics for the filming of season 4. Wearing nothing but the flesh coloured baby bump bodysuit, she told the camera the bump was the same size as an 8 month pregnant stomach.

Eventually putting her dress on over the top of the bump, she told viewers that taking toilet breaks while wearing the suits – that are a little like leotards – is extremely difficult.

Apart from Mel being pregnant and not knowing who the father is, a lot else happens in season 3 of Virgin River. The series began with Jack in hospital after being shot. Luckily, his fate is quickly resolved and viewers see him back in his bar, fully recovered. The only issue is, he can’t remember who shot him.

After a whirlwind romance with lawyer Todd, Charmaine is now married to him – marrying after only 3 weeks. Pregnant with Jack’s twins, Todd appears to be steering Charmaine away from Jack, and her friends in Virgin River. Todd forces Charmaine to give up the dog Jack gave her, and wants to legally adopt the twins. It appears he wants to make Jack as miserable as possible.

New character Brie arrives at Virgin River – she’s Jack’s sister. She immediately finds a friend in Brady, and the two have their individual demons they’re battling. Brie is running from her former boyfriend, a lawyer who abused and raped her. She later has a miscarriage, being unaware at the time she is pregnant. The baby was a result of the abuse she suffered.

Brady is trying to cut ties with Calvin from the dope farm, who has been killing people all over the place. Brady is eventually arrested for Jack’s shooting by Mike, when the gun used in the incident is found at Brady’s house. Brady insists he’s been framed, and viewers agree that questions remain surrounding his guilt.

Preacher nearly left Virgin River to take up a new chef position that held a lot of potential. However, he was forced to remain where he is when Paige – still on the run for murdering her abusive husband – enlists him to care for her young son Chrsitopher. Paige’s friend Sally later contacts Preacher to set up a meeting with him and Paige. Desperate to know how his former love interest is, Preacher goes with Sally, who drugs him. Leaving him for dead, no reason for her actions are revealed.

Hope was left in a coma at the end of season 3, following a car crash. Absent for the majority of the season due to being trapped in Port Royal because of a hurricane, she crashes her car just as she arrives back in Virgin River. With severe brain injuries, she is placed in a medically induced coma while Drs see how she recovers. Ater her heart attack in season 1, Hope isn’t having much luck with her health.

With Hope out of the picture and Doc coming to terms with his macular degeneration diagnosis, he once again gets close to Muriel. A mysterious young man also turns up in Virgin River, claiming Doc is his grandfather – this is a surprise to viewers who think Doc has no children.

With Doc possibly having to wind down his hours at the surgery, he hires a new Dr to take on some hours. Handsome Dr Cameron Hayek makes an impression on the female contingent of Virgin River, whom they find refreshing after the gruffness of Doc for so many years.

Lily sadly dies of cancer. She receives her diagnosis then passes away very quickly afterwards. Her daughter Tara steps in to look after baby Chloe, and they’ll be living at Lily’s farm together. Tara could potentially be a new recurring character for season 4.

Virgin River season 4 was released on Netflix on July 20, 2022. The new series has 12 episodes in total for viewers to watch, each one lasting around 1 hour in length.

There are 3 Netflix packages (opens in new tab) available to purchase, with prices starting at £6.99 per month. This cheapest option includes unlimited access to the Netflix catalogue. Subscribers can only stream from one device at a time with the basic package.

A mid-range option costs £10.99 per month. This standard package also includes the entire Netflix catalogue, while also allowing simultaneous streaming from 2 devices. Some shows and films will be available in HD, and downloadable to mobile devices.

The premium package is priced at £15.99 per month, featuring extra bonuses. These include the ability to stream across 4 devices simultaneously, and most of the catalogue is available in Ultra HD.