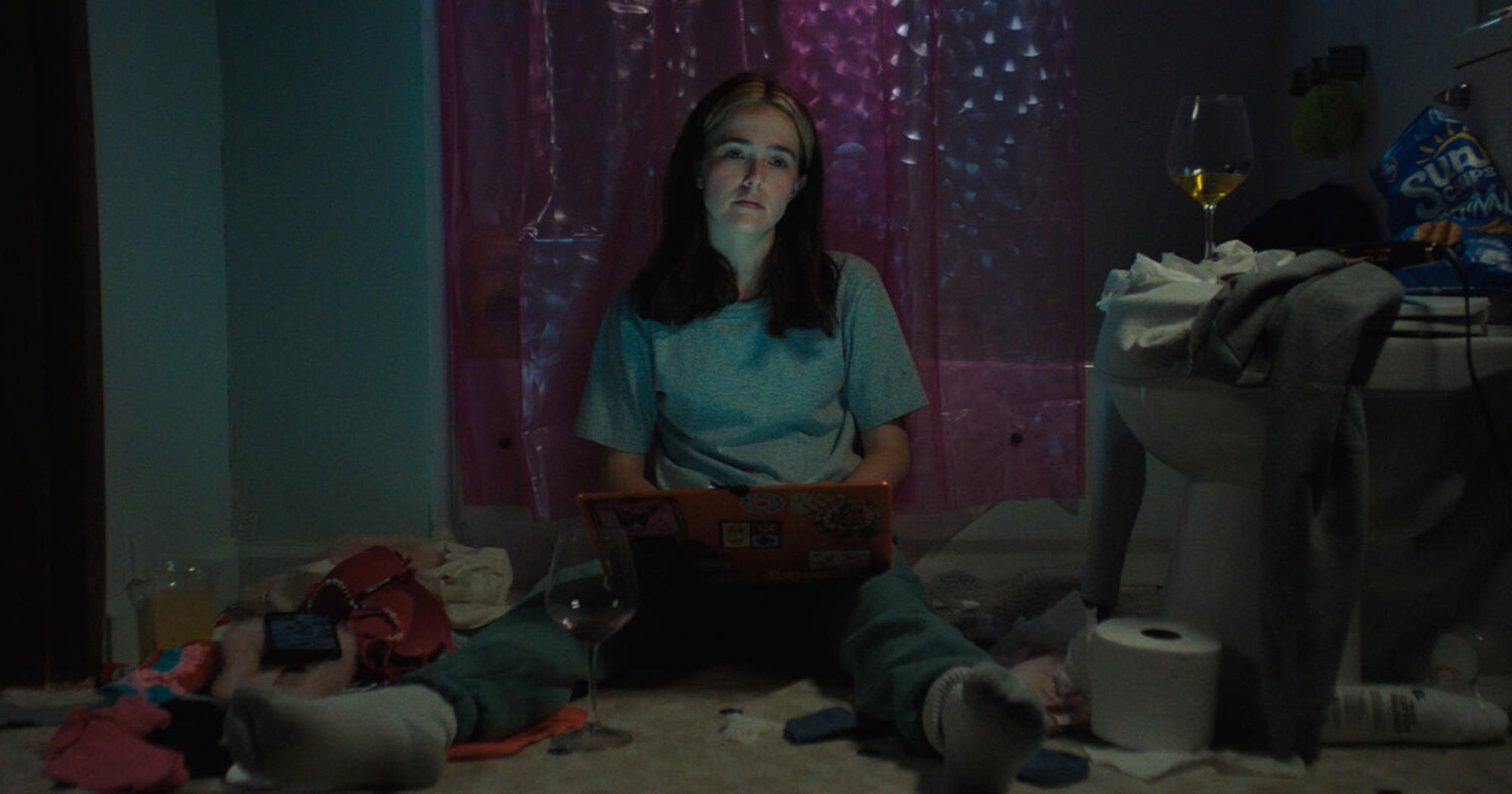 Spoilers ahead. It’s not hard to dislike Danni Sanders. With her money piece bangs and colorful plastic rings, the lead character in Hulu’s Not Okay, played by Zoey Deutch, complains about not being part of a minority group (they have their own community, she says) and expresses FOMO from being on a cruise with her parents during 9/11, “the single most formative trauma experience for zillennials,” she tells her editor at the fictional digital media startup Depravity. Her self-absorption is clear when she says, “I didn’t even know anyone died.”

It’s a truth that becomes increasingly more apparent throughout the film as Danni — in order to achieve internet notoriety — fakes a trip to Paris, lies about being by the Arc De Triomphe during a terrorist attack while on said trip to Paris, and subsequently profits off the tragedy by writing about her pseudo-experience in an article that goes viral. To gain more clout, Danni DMs teen gun reform activist-turned-Instagram celebrity Rowan (Mia Isaac) on the premise of wanting to use their traumas — one viscerally real, the other Photoshopped for the Gram — to change the world. Of course, both the audience and Danni know that her experience is complete BS.

It’s frustrating to watch, especially because, as viewers inch closer and closer to the end of the film, it feels like Not Okay is going to follow the similar story tropes we all too often see on screen, where an out-of-touch white woman does something pretty inexcusable, gains all her desires, is canceled by the public, has an epiphany moment where she learns her lesson, and is bestowed with a redemption arc.

But the last 10 minutes of Not Okay completely flips the script. A month after the truth comes out about Danni’s deception, her former BFF Rowan takes the stage at a school variety show, delivering a powerful spoken word monologue about Danni and finally speaking her truth. Danni, who, unknowingly to Rowan, has come to apologize, sits in the darkened auditorium in total silence as the message rings clear: nothing she can say will ever make this okay. With that moment of realization, Danni gets up and leaves, without bumbling through the apology crafted on her iPhone’s Notes. Danni doesn’t get the validation of her mea culpa from the person she wronged — and that’s the way it should be.

“I think it’s perfect that Danni doesn’t get that redemption arc,” Mia Isaac tells Refinery29 over Zoom. “Even at the end of that scene, Danni walks out, which is a metaphor for her leaving the narrative and leaving the story, because she’s realized that this isn’t about her, for the first time.”

For Isaac, Rowan’s impassioned monologue was her favorite scene in the film for a few reasons. She auditioned for the role of the inspiring celebrity activist with this speech, and she worked tirelessly with a spoken word coach to perfect it. Isaac also acknowledges the precedent it sets by centering Rowan’s feelings, pain, and ultimately her voice as the film’s final message, both in the film and IRL. “It’s really, really special and really cool as an actress, as a woman of color, and as a young person to be able to have this killer three-page monologue, to get the mic, to get the screen time, and to get this moment,” she says.

Up until this point, audiences — and those around Rowan — only know her through the lens of Danni, as someone who’s survived a school shooting, and has now been almost expected to use that trauma to help others on a national stage. She’s tough. This is the Rowan we meet at the beginning of the film and the one that Danni first encounters. “Rowan is a leader, and she’s the person that a lot of people go to for help and for guidance,” Isaac says. “She has turned her experience — her trauma — into strength and into power, and not everyone can do that. So I think she’s probably used to people coming to her looking for some words of advice.”

In the dynamics of their friendship, Rowan helps and centers Danni’s feelings and shares her own personal pain to comfort her new friend. In fact, it’s Rowan’s recounting of how she continues to struggle after her school shooting that Danni steals to write her viral op-ed “I Am Not Okay.” And even though Rowan shows glimpses of unease at seeing her own words used under someone else’s byline, she puts it aside because in her mind, the two are part of a tragic and growing club of people who experience unspeakable trauma. This is a dynamic Isaac knows well. “I know many Dannis in my life,” she says. “I’ve been friends with many Dannis. I’ve been the Rowan to many peoples’ Danni.”

That is, until Danni’s scam is revealed, and Rowan has her moment to speak. “I guess that I am so used to being stolen from that when I read my words in your voice, I re-posted them,” she says in her monologue. “And applauded you as you boasted, gave you a platform that floated you right up to the top. And you never thought to stop?…When you looked into my eyes you just saw another voice to co-opt.”

Which is why this final scene is so impactful. “[Rowan’s] constantly being pushed over for these influencer parties and for these goat yoga scenes, and finally, she’s getting her chance,” Isaac says. “No interruptions, no distractions. You’re forced to listen to her, and I hope that people actually listen.”

For Zoey Deutch, it’s a sign that Danni has grown. “That’s self-awareness,” she tells Refinery29. “That’s the first time she says something that’s self-aware.” For the actress, all the things that have made Danni cringey and “unlikeable” have been specifically because she lacks self-awareness. “As a result of this whole experience, she’s forced to look inward and actually see how other people see her for the first time and not make herself the victim and not feel sorry for herself, but really look and go, wow, have I learned anything from this experience? Even by doing that, that is learning something in and of itself.”

It’s subtler, and it’s almost fleeting. When Calloway suggests Danni make amends with the people she’s harmed, it feels like the social media star might still have a lot to learn. An apology can actually still very selfish, it’s a decision and goal steeped in Danni’s own need to prove to herself that she’s grown and changed, even if she really hasn’t. The apology would be for her and her alone. Which is why when Danni leaves the auditorium, unable to make her final apology to Rowan, it’s the realization that Rowan doesn’t need or want an apology, and the acknowledgment that Danni doesn’t get to decide whether she deserves that grace. “In a lot of ways, it’s the first good decision Danni makes,” Deutch says. “Realizing that she doesn’t need to insert herself in this story anymore and that the story was never about her.”

The decision to end the film with Rowan having the last word is a powerful one. Finally, after having her autonomy taken from her — first by the school shooting that took her sister and made her into an activist, and then by Danni, who stole her voice and message, Rowan is speaking for herself. As she asserts in her powerful monologue, “You can’t take the mic, this is my time slot.”

We’re offered a quieter, more nuanced alternative to the redemption arc we’re so used to seeing, for the characters like Danni, who — as Rowan puts it on screen — “get movies on Netflix and Hulu.” Both Danni and the audience are left to sit with a more subtle, internal form of growth from the main character, but growth nonetheless. “I do believe in growth and I do believe that a huge part of the human experience is making mistakes and taking responsibility for them and owning up and accepting the consequences that come with them,” Deutch says. “I want to believe that people can learn and people can grow. And I do believe that there is growth at the end of the movie.”

And Isaac hopes this switch-up will resonate with audiences, especially the IRL Dannis of the world. “I feel bad for Danni in that she doesn’t understand how bad of a person she is and that she doesn’t know how to be any better or know what she’s doing wrong. And I think that’s the problem with a lot of people in our society, a lot of people aren’t even aware of the fact that they are not good people. And hopefully people that are the Danni’s of the world won’t watch this movie and end it saying, Oh, Danni was great, she deserved a redemption arc. Hopefully it will open people’s eyes to their own faults and flaws.”

Not Okay is streaming now on Hulu.

Aaron Coleman Shows That Cancel Culture Is A Lie

Zoey Deutch Pulls Off A Major Scam In Her New Film