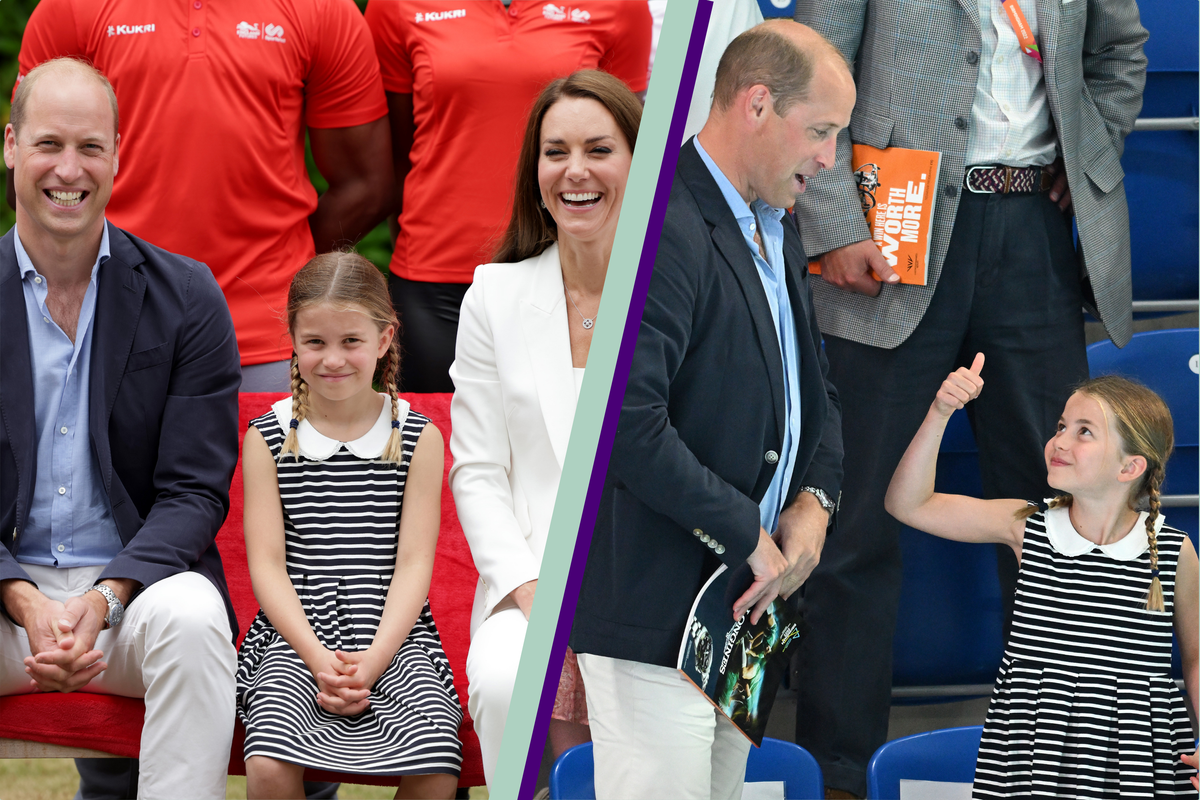 Royal fans were quick to spot a striking similarity between the young princess and her dad as Princess Charlotte attended the Commonwealth games alongside Prince William (opens in new tab) and Kate Middleton (opens in new tab).

The Commonwealth games have gripped the attention of people globe-wide, whether they are watching for the sports or the chance of catching a glimpse of the royals in attendance.

Princess Charlotte aged seven, attended the swimming match on day five of the Commonwealth Games with her mum and dad, meeting with officials and athletes as well as enjoying the sports on show.

The trio were photographed interacting frequently during the match, the young royal  pulling many emotive faces and, at one point, giving her dad a thumbs up.

But while some fans were gushing over Princess Charlotte’s adorable Rachel Riley dress, which is available for £39, (opens in new tab) other’s noticed the way the young royal was mirroring her father’s pose.

In a snap shared to the Duke and Duchess of Cambridge’s Instagram page, Charlotte can be seen sat with her legs and arms in the same position as William, with her legs aside and hands locked in an entwined clasp, while Kate has one foot forward and hands placed neatly in her lap.

Throughout the day, more photo’s proved that the Princess has been watching and learning royal protocol from her dad. From the toothy grin to the candid, solemn gaze, Charlotte was the mirror image of Prince William as the Cambridge trio posed for photos and met with Commonwealth athletes.

Despite her confidence, William and Kate were caught giving some words of encouragement to the young royal as she met with Commonwealth game attendees. In an adorable video, dad William can be seen patting the youngster on her head prompting her to answer a question, before mum Kate gives the Princess a reassuring pat on the back and moves the conversation along.

Royal fans have been delighted with the recent surprise appearances of the young royal siblings. Princess Charlotte in particular is said to love joining her parents at royal events and engagements.

A source for Us Weekly told the magazine that the young royal loves the spotlight and added, “It’s obvious from being around Charlotte that she possesses all the personality traits to excel in her future role.

“Being in the public eye comes naturally to her–she rarely feels intimidated or complains about it. It’s something she really enjoys.”

While she is learning the royal ropes from mum and dad, Princess Charlotte is seemingly employing the same ethos she has for school work.

“She’s a hard worker and right up at the top of her classes in most subjects,” a source told Us Weekly, before saying that Charlotte is “self-motivated and a delight [to those around her].”