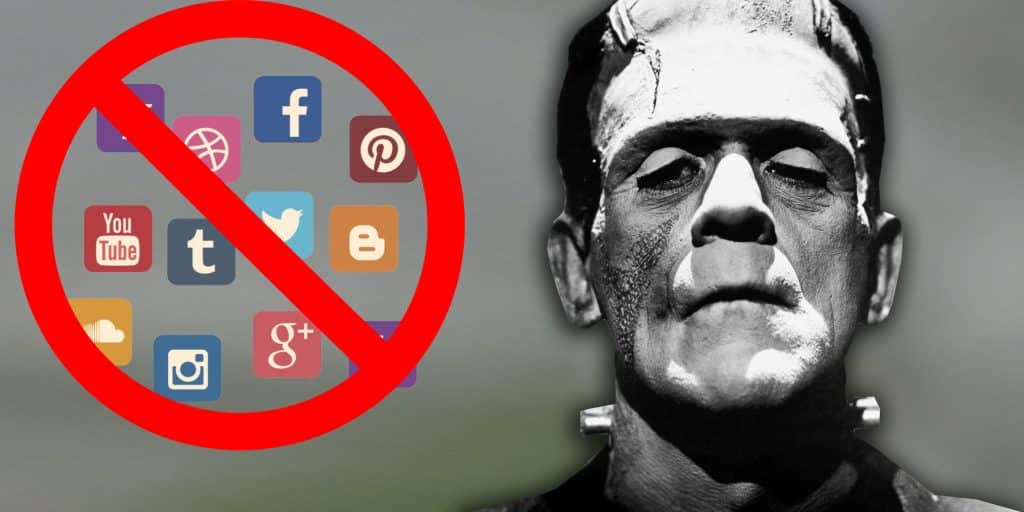 If you are like me, Victor Frankenstein, then you are being pursued by a devilish crime against nature that you crafted together from human remains. But you need to understand that the real monster is social media.

If it weren’t for social media—and the eight-foot-tall demon man-baby that you brought to life—you would still have every person you have ever loved. So quit social media today and don’t look back (unless it’s to make sure the colossus Decaulion isn’t following you). Here are the top five reasons why you’ll be glad you quit.

Social media algorithms are designed to entice you into buying the products advertised in between posts. You may have given up searching through graveyards for body parts after your monster progeny killed your sweet young brother, but apps like Facebook use user-generated content on a brand’s page to make you more likely to connect with and buy a product. When you saw a fun video from a fellow grave digger about the freshness of the arm she just procured, you immediately clicked on the Isolated Graveyards’ Facebook page and were sucked into buying two left hands you’ll never use. It was not because you are a modern Promethean megalomaniac.

People are buying your data. What people? Well, maybe not people in general, but definitely the hideous creature you created. Think that sounds far-fetched? Don’t forget that he came to life after you sewed him together and electrocuted his corpse. Or that he taught himself human language and managed to get through Milton’s Paradise Lost, most of Plutarch’s Lives, and Goethe’s Sorrows of Young Werther while basically an infant.

Social media makes you a prime target for predators and scams

No one can beat Robert Walton’s “Beautiful Icebergs” Pinterest board for breathtaking vistas. If you think you might eventually need to escape your creature’s vengeful pursuit on an ice flow, this might seem like the board to inspire and inform. But if your creature is following you on Pinterest (and not just literally following you in order to end your life), then he’s going to know exactly where you might escape to next.

Yes, you could set up a dummy Pinterest account to follow anonymously, but you really shouldn’t play fast and loose with social media if you want to stay alive. Never forget that social media is the monster.

When you’re on Instagram, it’s easy to see how many other people have not lost their families to a hideous monster that they created. You might think you’re connecting with old friends when you like that picture of a new Natural Philosophy textbook, but actually, you’re just inviting self-doubt and insecurity into your own life. Does anyone else regret not making a monstrous life partner for their creature? Could that have saved William and Elizabeth from their gruesome deaths? Did anyone else find their murdered bride waiting for them on their marriage bed?! Why didn’t my last posts get more likes?! Oh, the horror!

It makes you super stressed out

Once you stop doom scrolling, you’ll actually have enough time and energy to avoid imminent doom at the hands of the mutant colossus who lives only to make your life a living hell. Isn’t withdrawing from human interaction the reason you found yourself in this predicament? Take a break from social media, smell the roses on the graves of your loved ones, and with your newfound free time get ready to kill that behemoth freak before he kills you!

The Pac-Man Ghosts Are Unionizing

This Bowl Sure Is Getting Hot, Huh?