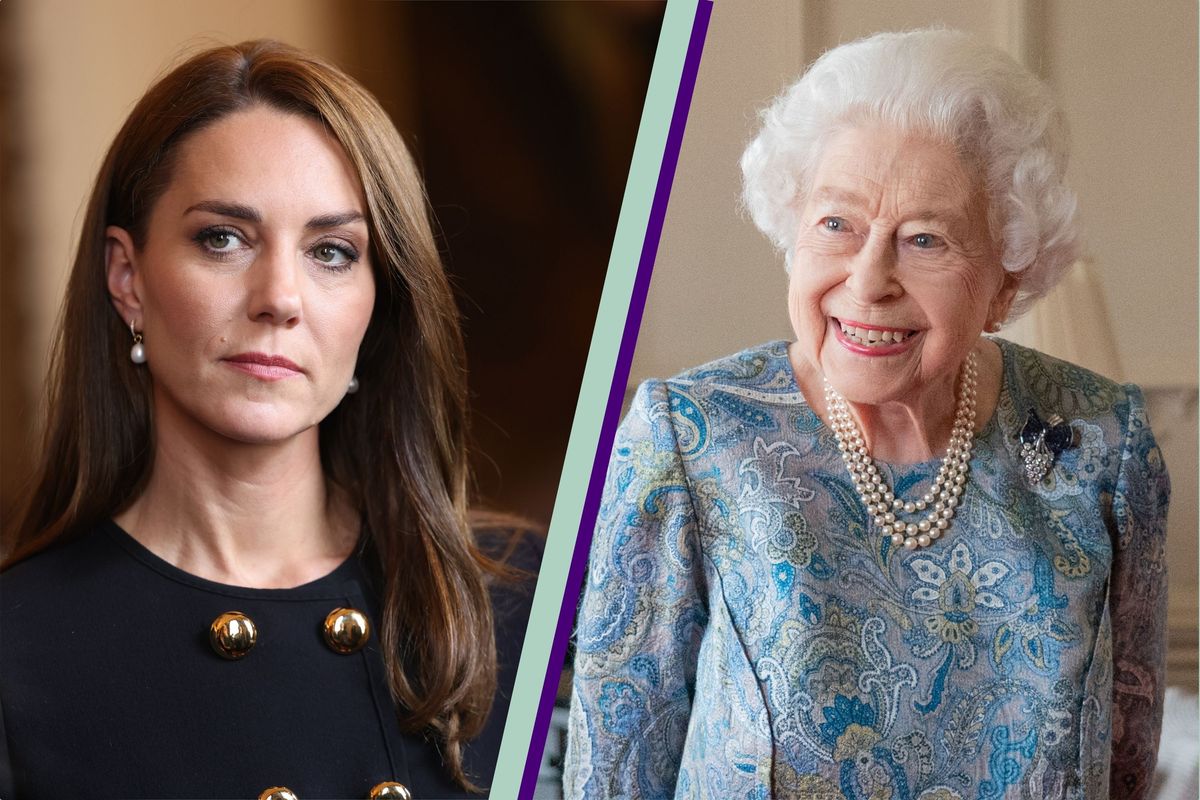 Kate Middleton recalled the moment she felt that the Queen was “looking down on us” during her recent public appearance in Windsor.

As the Royal Family mourns the loss of Queen Elizabeth, the Prince and Princess of Wales have now made their first public appearance since the Queen’s funeral (opens in new tab) on 19th September. Visiting the Windsor Guildhall in Berkshire on 22nd September, the royal couple thanked both staff members and volunteers who helped support the crowds around Windsor Castle (opens in new tab) and organise the floral tributes on the day of the monarch’s funeral and committal service.

During this poignant engagement, Prince William’s heartbreaking admission (opens in new tab) about getting “choked up” over certain tributes was reportedly made. Whilst Kate Middleton recalled the moment that she felt the Queen was “looking down” on her loved ones after she passed away at Balmoral Castle on 8th September.

As reported by People (opens in new tab), Prince William turned to his wife of eleven years during a discussion about the rather remarkable weather conditions in Aberdeenshire the day after Queen Elizabeth died.

“In Scotland, how many rainbows turned up?” he supposedly asked Kate, before going on to reflect that, “You hardly ever see rainbows up there, but there were five.”

“Her Majesty was looking down on us,” the Princess of Wales is understood to have replied, showcasing her belief that the late Queen was sending her loved ones a very special sign at this immensely difficult time.

The five rainbows in Scotland weren’t the only ones to be spotted in the UK around this time. A rare double rainbow appeared at Buckingham Palace and another rainbow was seen above Windsor Castle within hours of each other on the day the Queen passed away.

The Princess of Wales’ heart-warming remark about her late grandmother-in-law “looking over” her family came days after Queen Elizabeth was laid to rest. Her State Funeral at Westminster Abbey was watched by millions of people in the UK alone and Kate Middleton honoured the Queen (opens in new tab) with a beautiful jewellery tribute at the service in the form of a pearl choker that once belonged to the monarch.

Kate Middleton and Prince William’s eldest children, Prince George and Princess Charlotte, attended the funeral alongside their parents before they all travelled to Windsor for the Queen’s Committal Service at St George’s Chapel. Later that evening a private burial service took place at the King George VI Memorial Chapel, attended just by close family.

Share. Facebook Twitter Pinterest LinkedIn Tumblr WhatsApp Email
Previous ArticlePrince William’s heartbreaking admission over Queen tributes
Next Article Where is Ridley filmed and who is in the cast? All you need to know about Adrian Dunbar’s latest ITV drama.